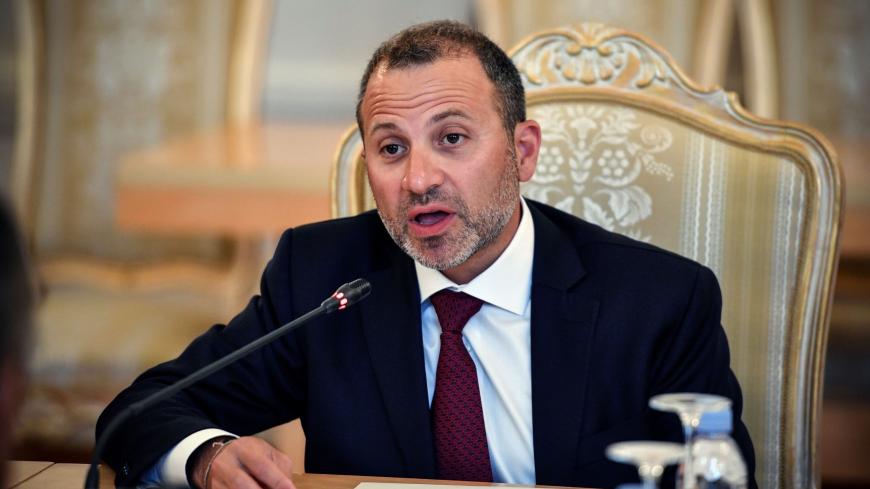 Lebanese Foreign Minister Gebran Bassil, in an exclusive interview with Al-Monitor, said this week that the main internal obstacles to forming a new government, now four months and counting, “are related to not respecting the results of the elections. In a national unity government, you only abide by the elections, and you get the formation right away. So we are afraid that this disrespect of the elections is coming out of what we heard that some foreign countries were not pleased by the results and that this would turn the equilibrium established in Lebanon, which I don't believe it's the case.”

“In Lebanon, no one can prevail,” added Bassil, who also serves as leader of the Free Patriotic Movement. “No one. No matter how strong you look economically or militarily or in popularity, you cannot rule the country alone. So no one government, no one parliament will be under — take over one party and specifically here I mean Hezbollah, because the situation as such is very wrong.”

“Unfortunately,” Bassil continued, “internal parties [fear] to take the needed decision to move forward with this formation of government because we want to reinstate what was before the elections. Actually, things are not changing drastically in the representation of the political parties. So to be afraid that such a government will be losing the equilibrium — the coming Lebanese government will be reflecting the Lebanese people, which are enough diverse in their political orientations and their, let's say, affiliation, whether internally or externally, and there is no reason to have this fear. … No one can control the country. This is very essential in Lebanon. No one party can do this.”

While President Michel Aoun works to break the deadlock, Prime Minister Saad Hariri appears to be the pivotal holdout. Hariri may be waiting for a call from Riyadh for guidance. There is a chance, however, that such a call is not coming, because Hariri’s longtime regional patron may be preoccupied and see Lebanon as a declining asset.

Bruce Riedel writes, “The stability of Saudi Arabia is becoming more fragile as the young crown prince’s judgment and competence are increasingly in doubt. Mohammed bin Salman has a track record of impulsive and reckless decisions at home and abroad that calls into question the kingdom’s future.”

In the past few months the crown prince has seemed more reserved, especially compared with his previous peripatetic and almost frenzied approach to governance. “Fearing for his security, the crown prince is said to spend many nights on his half-billion-dollar yacht moored in Jeddah,” Riedel suggests. “It’s a floating palace longer than a football field and with many perks. It is also a potential escape hatch.”

Hariri has of course felt the burn from being too close to the Mohammed bin Salman flame. In November 2017, commenting on the tragic spectacle of Hariri’s captivity and humiliation by the crown prince, we wrote that “the theater of Hariri’s journey is the staple of conversation in cabs and in coffee houses and other gathering places throughout Lebanon and the region. The Lebanese people, in the Marx Brothers’ terminology, are believing their own eyes. Lebanese politicians place their credibility on the line by pretending to go along with the charade, given the immense risks for the country with more than 1.5 million Syrian refugees in Lebanon and confrontation between Israel and Hezbollah. … In this case, Saad Hariri is his own witness in a court of conscience.”

The catch is that the crown prince, and perhaps Hariri, misjudged the Lebanese, who saw Hariri’s humiliation as Lebanon’s humiliation. Aoun stood by Hariri and never wavered on his demand for the prime minister's safe return, working closely with French President Emmanuel Macron. “The open secret of Hariri’s transformative journey has sparked a commendable popular outrage against such blatant and malign interference in Lebanese affairs,” we wrote in November.

The question today is whether Hariri has the vision or following to chart the independent course that the Lebanese people are seeking. They are tired of government paralysis and fed up with waiting for direction from foreign countries. This column noted two years ago that Hariri’s inclusion in Aoun’s government interrupted Hariri’s political slide. Hariri, after spending much of 2011-2014 outside the country, had lost hold of the Future Party, and what it had become. For Hariri, Aoun’s offer was a lifeline, probably his last chance to return as prime minister. But Hariri’s return has been more fizzle than sizzle. A new generation of leaders has emerged and a new dynamic attitude among young people is taking hold. Aoun, meanwhile, has tackled the most vexing issues of the day, including groundbreaking initiatives to deal with Syrian and Palestinian refugees in Lebanon, which are an unsustainable strain on Lebanon’s economy and political system.

This column wrote in 2014, four years ago, about an emerging new trend, or pulse, for Lebanon, which we are seeing today. “Lebanon,” we wrote, “might be on the verge of a social and economic upheaval that could unite many Lebanese around a new banner for change, and in doing so put to rest the classical political division known as the March 8 and March 14 movements.”

The March movements seem increasingly, if not completely, out of step with the times. “Lebanon” we suggested, “may benefit from an immunity to the sectarian virus, as its own experience with such polarization has led to endemic disappointment with that same rhetoric and false hopes, and an approach to politics that has betrayed its own people and left them with the feeling of being abandoned and powerless in the shadow of agendas that are not theirs.”

“That Lebanon could lead in this new social contract,” we proposed, “should not be a surprise. Lebanon did its time with its own bloody 15-year sectarian regional war, and still was able to recover and re-establish its cosmopolitan flair. There is a lot to build on. The failures and dashed expectations of the uprisings in Egypt and Syria, which quickly fell prey to regional and ideological agendas and violence, and Lebanon’s own tragic past, could make it an incubator for a new approach to governance that would allow Lebanon to realize its potential, rather than fall victim to the rhetoric and false promise of what was once known as the Arab Spring.”

This new social contract is the path out of the current impasse. But it requires a new type of prime minister, with a new and different profile, perhaps someone from outside of politics, beholden only to a vibrant and cross-sectarian Lebanese constituency. The March coalitions, rooted in identity politics and patronage, have had their day, and the record has been, at best, unremarkable and disappointing. Lebanon is showing it is capable of more, that it has the potential to be “an incubator for a new approach to governance” based on accountability to the Lebanese and not to foreign capitals, and thereby a model for the region.