Is a minority government in Israel a real option?

The meeting between Blue and White leader Benny Gantz and Arab Joint List leader Ayman Odeh marks a historic change, even if it will probably not lead to a joint minority government. 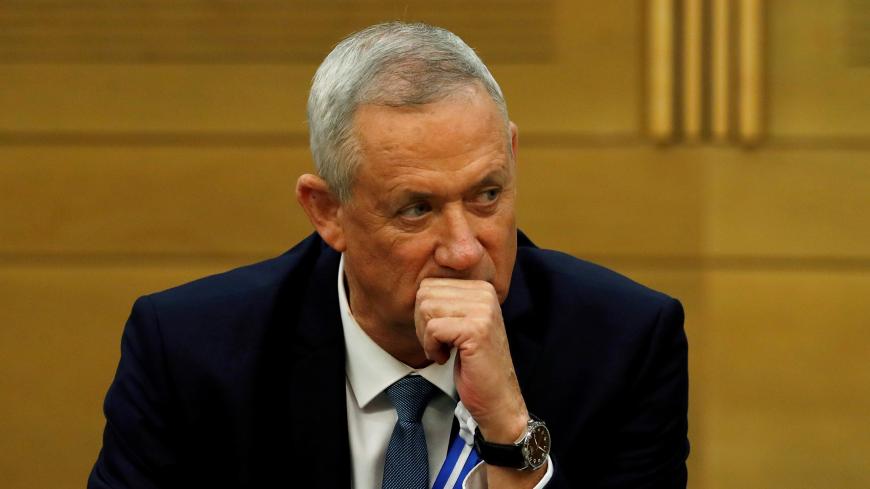 Benny Gantz, the leader of the Blue and White party, looks on during his party meeting at the Knesset in Jerusalem, Oct. 3, 2019. Gantz, who has been tasked with trying to form the next Israeli government, met Oct. 31 with Arab Joint List Chair Ayman Odeh.

After President Reuven Rivlin tasked opposition leader Benny Gantz on Oct. 23 with forming Israel’s next government, and after the chair of the Blue and White party initiated a call to Arab Joint List Chair Ayman Odeh, the two met Oct. 31 to discuss possible cooperation between their two Knesset factions.

Blue and White’s official position is to strive for a liberal national unity government with the Likud party, as Gantz made clear upon accepting the mandate from Rivlin, and as his party colleague and coalition negotiator Knesset member Ofer Shelah explained when interviewed for a previous Al-Monitor article.

However, this is the first such meeting between a prime ministerial candidate and an Arab party head since 2006, when Ehud Olmert was tasked with forming the country’s government. “I invited the Arab parties to meet after receiving the mandate to form a government,” Olmert told Al-Monitor this week. “There was clearly no chance of them joining the coalition, but it was important that I present at least a semblance of their being part of the political game.” His replacement at the head of the Kadima party, Tzipi Livni, avoided talks with the Arab parties when she was tasked with forming the government following Olmert’s 2008 resignation, and opted to return the mandate to the president after failing to assemble a majority coalition.

The very meeting between Gantz and Odeh points to how far the candidate for Israel’s premiership has come since entering the political arena. Just one year ago, Gantz shunned the Arab electorate and did not even offer any Muslim or Christian candidate a slot on his party’s Knesset list prior to the elections. He did include an Arab Druze candidate, Knesset member Gadeer Kamal-Mreeh, perhaps because most Israeli Jews tend to believe that the Druze are not Arabs. In his first interview as Blue and White leader to Israel’s three major television news shows in Marc, Gantz went as far as to rule out any political discourse with the Arab parties. He also often made a point of calling the country’s Arab citizens “non-Jews” rather than Arabs. And now we are at the point that he is meeting with the head of the alliance of all four Israeli Arab parties in the Knesset to discuss coalition negotiations.

Gantz’s decision raises many question marks. For example, do Gantz and Blue and White intend to conduct serious talks with the Joint List? Or is this merely a pro forma meeting for media-political purposes?

These questions arise out of disagreements within Blue and White regarding the option of a minority government, meaning one that does not include the Likud and relies on the Knesset support of the Arab parties. On the one hand, we hear the party’s leaders declare that all options are on the table and that no effort should be spared to avoid a third round of elections, but on the other hand we hear the party’s more hawkish Knesset members such as Yoaz Hendel, Zvi Hauser, Chili Tropper and Orit Farkash-Hacohen ruling out the establishment of a minority government supported by the Arab List. Whose position should we believe?

“Before the elections, I declared that there are no compromises at the extremes. No compromises with (far-right activist Bentzi) Gopstein and no compromises with (leftwing politicians) Ofer Casif. Some things cannot be digested even in the name of politics. The elections did not change my mind,” Hauser told Al-Monitor. When asked how he resolves the contradiction between his emphatic statement in an interview earlier this year that “the Arab citizens are equal citizens, period” and his current refusal to let their representatives join a government, Hauser chose not to answer.

Despite the differing opinions within Blue and White, the Arab Joint List opted to join the political game this time, unlike previous occasions. This is undoubtedly the result of the pressure exerted by Arab voters, who are fed up with sitting on the sidelines and are demanding to be allowed to play, as I explained in a previous article.

“Blue and White’s official position calls for a unity government with the Likud,” Knesset member Mansour Abbas of the Joint List told Al-Monitor. “But they know that they need the Joint List now and would need it in the future, and therefore they have an interest in holding talks with us,” he said, adding that had his party not recommended Gantz to Rivlin, the president might not have even given Gantz the go-ahead to try to form a government. “The question is whether after 28 days, once Gantz’s deadline expires, and after an additional 21 days during which the Knesset tries its hand at forming a government, Blue and White will continue to insist on a unity government or change direction,’’ Abbas said. “In my assessment, Blue and White will do anything to get Benjamin Netanyahu out of the prime minister’s office, and in order to do so, they need the Joint List. This time, unlike previous times, we have decided to roll up our sleeves and play the political game.”

Nonetheless, the Joint List is clear on one thing — it is not interested in joining a government of any kind, preferring to exert its influence from the outside by supporting the government in Knesset votes. The reason is clear: The Joint List has no desire to accept collective and ministerial responsibility for governing the Jewish state.

The biggest surprise, at least until recently, was that the wild card of the 2019 elections, Yisrael Beitenu party leader Avigdor Liberman, did not rush to rule out a minority government, despite his outspoken animus against Arab lawmakers, making it a truly viable option. I would not rule out the possibility that Liberman simply understands that the only thing Netanyahu sees in front of his eyes these days is the pending decision by the attorney general on whether to indict him on corruption charges, expected in November. That said, Liberman does not want to throw Netanyahu a lifeline by doing something that would allow Netanyahu to remain prime minister.

After all is said and done, it is still unclear whether a minority government is a real option or simply an attempt by Blue and White to leverage concessions from Netanyahu’s Likud. “A minority government is definitely on the agenda,” senior Channel 13 analyst Raviv Drucker told Al-Monitor. “Gantz refuses to discount it and this is a courageous stand according to his standards. [His co-chair] Yair Lapid and Lapid’s Yesh Atid party are very much in favor, but on the other side there are Hendel and Hauser who are opposed. Liberman did not support it but did not rule it out, to date. Clearly, he is telling Blue and White that he will not back such a government, with all the harsh criticism he can expect to face, only to have two or three Blue and White renegades torpedo it. Therefore, even if Blue and White is using the prospect of a minority government as a threat [against the Likud] and does not really mean it, what they [Blue and White Knesset members opposed to a minority government] are doing is detrimental to establishment of a unity government by undermining the only threat Blue and White holds over the Likud.”