Sunnis have been quiet during the recent protests in Iraq, but not because they aren't suffering along with their Shiite countrymen. 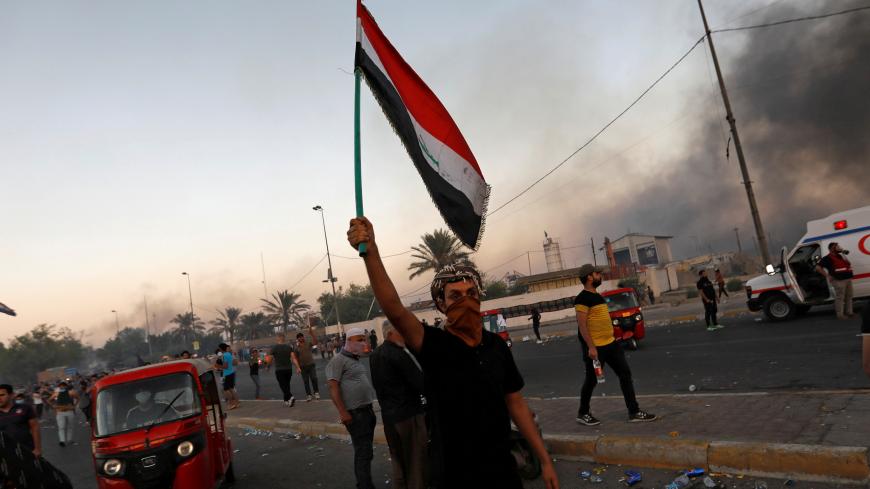 Protests in Iraq this month have strikingly witnessed no participation in Sunni provinces, as the nine governates involved have been Shiite.

Protesters raised banners with the slogan, “Sunni and Shiite Brothers,” alluding to the idea that they have a shared destiny and shared goals. But Omar, a young Sunni man from Mosul, explained the Sunni absence, saying, “It is because in the eyes of some people, we are seen as the Islamic State [which imposed a violent, extreme version of Sunni Islam]. If we protest, they will take us off the streets and throw us in secret prisons. Yet we are still oppressed and our situation is as bad as everyone else’s and even worse," he told Al-Monitor.

Anbar provincial council member Farhan al-Obeidi emphasized this fear in his statements to the press Oct. 8. “The Sunni silence and avoidance of taking part in the protests is the right thing to do [right now]. There are ready-made accusations to frame them and put them in jail. They might be accused of working for the old regime, the Baath or Saddam Hussein’s party," he said.

Obeidi believes Sunni leaders, rather than the public, took the decision not to participate in the protests. “The Sunni silence and absence is a decision made by Sunni bloc leaders and most Sunni politicians. They deem it positive based on their readings of the current situation,” he noted.

Like Omar, Ninevah Gov. Ahmed al-Jabouri told Al-Monitor he also believes the Sunnis were reluctant to participate because of "their fear of being accused of belonging to terrorist organizations like IS and working for external powers." Ninevah is largely Sunni.

"These accusations are ready to be thrown [at the Sunnis] once they participate in rights movements,” he said.

Jabouri also attributed the Sunni absence to the “ruthless violence the state is committing against the Shiite protesters.” He added, "The government is sending a message to the Sunni youth warning them that their destiny will be the same and even worse should they decide to participate in protests.”

The demonstrations began early this month and recently quieted for the most part, but not before the death toll exceeded 100 and more than 6,000 people were wounded.

Social media shows Sunni support for the protests. Mosul Eye published Oct. 5 a call for participation: “Even if you are unable to protest, this doesn't mean you can't exercise civil disobedience by staying home.”

Young Sunnis feel solidarity with the Shiite protesters, Jabouri noted. “The Sunni youth intellectually and morally support the protesters. In mixed areas like Baghdad they participated in protests. There is clear involvement in the Adhamiyah area of the capital. Some of them lost their lives. … They are motivated by the same reasons that pushed the Shiite youth to rebel,” he added.

An absence of protests was also noted in areas of Iraqi Kurdistan. Local authorities in Erbil, where the Kurdish Regional Government (KRG) is based, rejected Oct. 3 a request activists made for a march in support of the protesters in Baghdad's Tahrir Square. Though the authorities said they turned down the request for “security," the reasons appear to be political, as the KRG has tried to calm protesters' calls for Prime Minister Adel Abdul Mahdi to resign.

Local authorities in mainly Sunni Ninevah province feared protests might break out, which pushed them to deploy security forces around the administrative building north of Mosul. Simultaneously, internet service was suspended so people in mixed Sunni/Shiite areas like Kirkuk could not follow the protests happening in Baghdad and southern Iraq. Still, this did not stand in the way of protests being launched Oct. 2 in Kirkuk around the administrative building.

Mohsen al-Shammari, former minister of water resources, told Al-Monitor, “Sunni governorates like Ninevah, Anbar, Salahuddin and Diyala are still picking up the pieces after the [years of] destruction in Iraq. They have also been putting so much effort into keeping IS from infiltrating the area and [they have been] targeting sleeper cells. This played a role in their refusal to participate in protests.”

Shammari added, “Protesters in the center and south [of the country] are aware that corruption is no less dangerous than terrorism, which they fought and which caused deaths and injuries. Around 60,000 to 70,000 members of the [mainly Shiite] Popular Mobilization Units [PMU] participated in the fight against IS and then went back to their cities and saw the privilege [some of] their counterparts had. Many underprivileged people participated in the protests across all provinces.”

Haitham al-Khazaali, a political analyst at Alhadaf Network, told Al-Monitor, “Shiite areas suffered the most from a lack of services, the economic situation and unemployment. The involvement of Sunni provinces in the protests would lead the movement to failure, given the presence of sectarian issues.”

Yet Iraqi High Commission for Human Rights spokesman Ali Al Bayati told Al-Monitor, “The protests mostly took place in Shiite areas, but this doesn't mean that Sunnis in Basra, Baghdad and Babil didn't participate. The protests showed the uselessness of [any] attempts to trigger religious strife through ideology and religiosity, especially among the protesting new generation.”

The protests in Iraq have receded, but they could return, even in Sunni areas. This is bound to happen if the government does not provide better services, infrastructure and employment. At the end of the day, the disparity between the people and the political class and the spread of poverty are issues everyone is facing irrespective of their sectarian belonging.