Why these Egyptian artists are telling Cairens to take deep breath

At the "Tea Time with My Lungs" exhibition, three young artists explain with art the importance of just taking a deep breath. 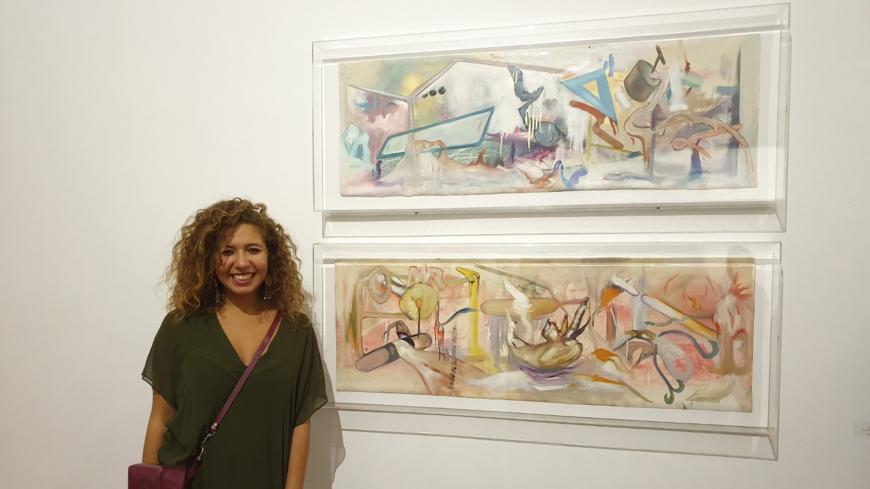 Egyptian contemporary artist Nada Baraka poses for a photo with two of her works on display at the "Tea Time with My Lungs" exhibition, Cairo, Egypt, Sept. 18, 2019. - Salwa Samir

“There was a brain washed ashore

This cyanotype text on paper titled "Brain Ashore" by Soha Elsirgany, an Egyptian multimedia artist and arts journalist, is one of the striking pieces at the “Tea Time with My Lungs” exhibition that focuses on the relationship between the human body and the outside world. The exhibition's press release describes the body as a host — a theater, room, city or landscape — allowing different narratives such as memories, coping mechanisms, traumas, the stories we receive and the ones we tell ourselves to play out.

The exhibition held at the Soma Art School and Gallery in Cairo features works by three Egyptian contemporary artists: Elsirgany, Nada Baraka and Marwan El Gamal. The “tea party” in the title playfully refers to moments of calmness, and “lungs” refers to the cross-cultural practice of “taking a deep breath."

“We (she and the other two artists) came up with this idea so that we can think out loud on how negative emotions such as stress can impact our body and lead to illnesses,” Elsirgany told Al-Monitor. “So I focus on the relationship between our body and what happens outside those two worlds that influence one another.”

The works are “a call to sit down and understand what impacts our body and how our inner body reflects what happens outside,” she said.

One of her works, a 200 x 50 centimeter cyanotype on blue paper with an illustration, shows the atlas of an imaginary city that she calls Sciatica — a metaphor for the human body. On several points, there is a column made up of small papers on which there is a story that describes emotional history and internal narratives. “It is a pain map, caused by outside emotions that have taken place inside,” she explained.

Marwan El Gamal portrays the bad memories as fossils buried in the desert. His paintings draw strange geography — half landscape and half body — with unidentifiable objects scattered throughout the canvas.

Gesturing at his painting titled "Pulsing Cavers," acrylic and oil on canvas, El Gamal told Al-Monitor, “I want to imitate the shape of bones, but with a touch of drama. The bones look like intersecting roads. What I want to narrate is imaginary people in a conflict.”

“Living Vapor,” another oil painting by El Gamal, also shows bones. “In that painting, I wanted to rid the body of its skin and delve deep to know it is made up of what … I wanted to show; for example, what the nervous system consists of. I see nerves in endless movement while the body is calm and silent."

El Gamal, who received an MFA in painting from the Frank Mohr Institute in Groningen, the Netherlands, in 2016, currently refrains from using bright colors, though some of his earlier paintings are in vivid colors with scenes resembling a circus.

"I want to let the viewer concentrate on the idea without being distracted by color. I prefer to use white and black," he said.

Works of the third artist, Baraka, finds inspiration in fiction or in the scientific books that she has read — she lets her mind wander with the story. She visualizes the scenes from the text and then adds a few small tools.

"I liked working with different artists around the same idea,” she told Al-Monitor. “It was a new way to express life and how it is developed and changed," Baraka, who obtained an MFA from Central Saint Martins in London in 2014, told Al-Monitor.

"I see life as a mixture of comedy and drama. I use the bright and cheerful colors to express the good side of life and dark colors on the sad parts as well as wounds in the body," she added.

The exhibition will continue until Oct. 17.