Some Egyptian political parties, reacting to recent arrests made to curtail protests, have threatened to cease political activity to express opposition to the authorities' approach. 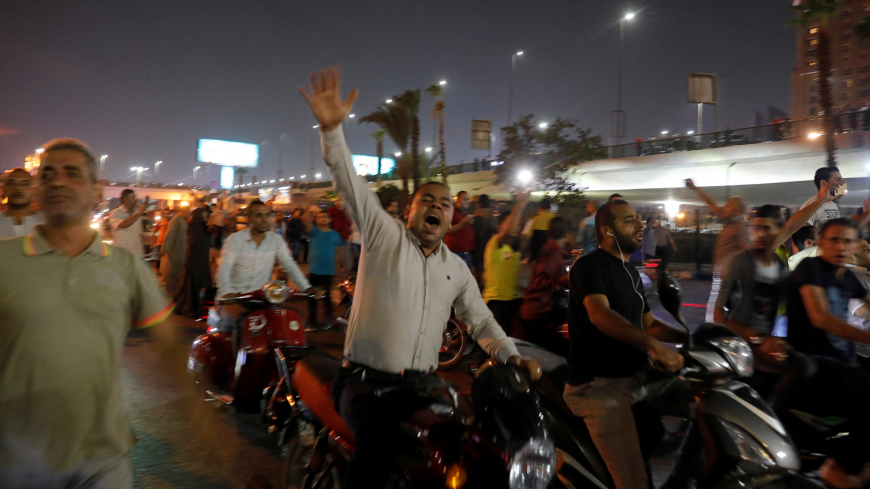 A correspondent in Egypt
October 1, 2019

CAIRO — Secular parties are considering freezing their political activities as a result of the recent campaign of arrests against people who oppose or have differences with the government.

The Dignity Party, which has a Nasserist orientation, indicated it would freeze its political activity if authorities continue with the same approach. The party, established in the wake of the January 25 Revolution and led by former presidential candidate Hamdeen Sabahi, warned Sept. 18 that the government's actions pave the way for a environment that can "reproduce terrorism and anarchy.”

The party wrote on Facebook, “There can’t be any work in the public sphere in light of the regime insisting on victimizing all of its oppositionists and confiscating all areas of peaceful public action; this could prompt us to announce freezing partisan action.”

The post added, “The authority in Egypt has confronted with utmost violence any initiatives for peaceful political practice, even those that go in line with the regime’s legitimacy, the constitution and the law which [the authority] uses as an umbrella.”

The Dignity Party’s statement was issued in protest against the fact that three months have passed since the arrest of activists who were planning to set up the Hope coalition to run in the next parliamentary elections. Security agencies accused the Hope group of targeting the heart of the ruling regime and obtaining funds from the Muslim Brotherhood to destabilize the country.

Nevertheless, insinuating a possible freeze of their activity only brought further repression. Hours later, security forces apprehended the Dignity Party’s deputy chairman, Abdul Aziz al-Husseini, which prompted the party to issue another statement Sept. 21. It wrote, “The repeated arrests against national civil forces that protested against and brought down the [Brotherhood’s] project are a sham. The people will not buy it for long.”

In the past few days, a number of prominent liberal and leftist figures, including Husseini, the deputy chairman of the Socialist People's Alliance Party, Abel Nasser Ismail, the former head of the Constitution Party, Khaled Daoud, and leftist lawyer Mahienour el-Massry were arrested on charges of circulating lies and affiliation with a banned group. This came as part of a campaign involving nearly 2,000 detainees, before Mohamed Ali, an opposition contractor residing in Spain, called for the ouster of President Abdel Fattah al-Sisi’s regime.

There were limited protests in Cairo, Suez, el-Mahallah, and Damietta last week calling for Sisi to be brought down, thus meeting Ali’s call. This came following a series of videos where Ali accused Sisi and the military establishment of building presidential palaces and a luxury hotel that would be run by and otherwise benefit a former military general.

A source within the Socialist People's Alliance Party, which was set up following the January 25 Revolution, said that the party was considering freezing its activity in parallel with the Dignity’s Party’s announcement. Yet the latest campaign of arrests forced its leadership to back down for the time being out of fear of being arrested as well, the source said.

The source, who declined to be named further, told Al-Monitor that the decision to freeze partisan activity is still on the table within the Civil Democratic Movement, particularly since arbitrary arrests are increasing in parallel with the protests. Taking such a decision, however, depends on the authority’s response to the civil opposition’s call to open dialogue channels, he said.

Magdi Abulhamid, spokesperson for the Civil Democratic Movement, the formation of which involved liberal and leftist parties, including the Dignity Party, told Al-Monitor that the parties’ threats to freeze their activity is an expression of despair at the present political situation. He said these warnings show that authorities need to take into account the risks stemming from the prohibition of political activities and the marginalization of parties’ voices. He said, “Our step has a clear meaning; if the authority does not want [the parties to practice] politics, it is better for us to quit.”

The Civil Democratic Movement submitted, in a Sept. 23 statement, some demands to the government, including for prisoners of conscience to be immediately released, for the blackout to be lifted on banned media outlets, for all state-owned media to be open to the various currents, for investigations to be held into the corruption cases that have come to light and for there to be prosecutions against those responsible for these cases, for the armed forces to refrain from involvement in political bickering and the economic sector, for parliamentary elections to be held based on the open party list representation system and for there to be a reconsideration of the country's economic and social policies.

Abulhamid said that the Civil Democratic Movement has a vision for political reforms and that this vision is reflected in these demands. He added that the group, contrary to its portrayal by the local media, is against anarchy. He said the movement did not take part in the recent protests that demanded the ouster of the regime.

The option to freeze partisan activity has not been taken up by all opposition forces. The Conservative Party, led by Akmal Qartam, a businessman and member of parliament, still plans to remain in the political sphere and hopes to end political tension via dialogue with the authorities.

Mohamed Amin, a top official of the Conservative Party, told Al-Monitor, “Freezing [political activity] is a sort of peaceful protest and a qualitative escalation against the general atmosphere. Yet our party believes that there is hope for dialogue, based on our orientation and the constants upon which any democracy is founded, whether we are in the government or opposition.”

In turn, the authority has not closed the door to attempts to achieve political reform, wrote journalist Yasser Rizk, editor-in-chief of the state-run Akhbar al-Youm, in a series of articles on political reform. He said he believes the state wants to contain the supporters of the June 30 Revolution in order to build a different political life. He also said this requires boosting freedom of opinion and expression in the press and the media without restrictions, but in a way that respects legalities. For him, this includes mergers of politicial parties — there are about 140 of them — into larger ones.

Nevertheless, he said the desired political reform requires a favorable environment that the state needs to provide or that the civil opposition needs to pressure for in order to make such an environment available before the merger process starts.

Amin said meeting the parties’ demands will continue to depend on how serious the dialogue between state and the opposition and supporters is. This is because strong authorities do not dispense with a domestic opposition that can illuminate the government's weak points, with the ultimate goal of serving the public’s cause.

“What we want is a genuine political reform. If no breakthrough is reached, our presence would equate to our absence,” Abulhamid said.