Media trainings aim to give Awqaf's imams better verbal skills — not only against extremist views but also against their rival Al-Azhar. 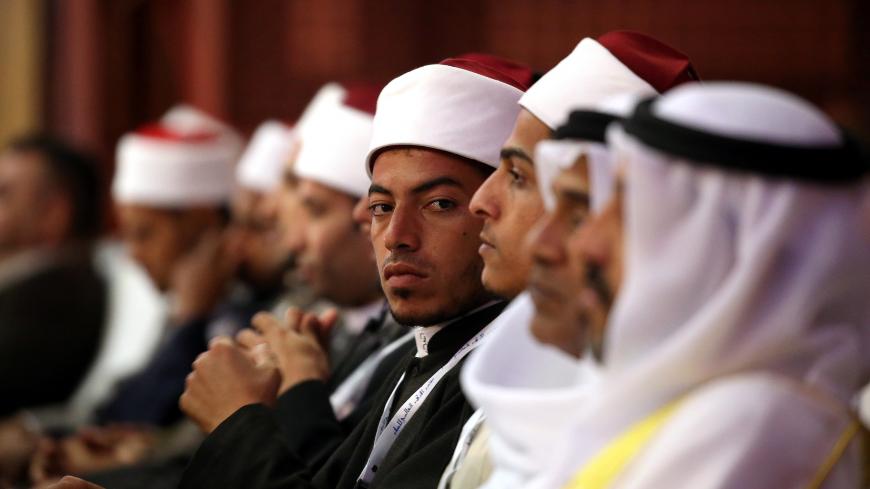 The media trainings were launched three months ago by Maspero, the Radio and Television Union, in cooperation with the Ministry of Higher Education and Scientific Research and a number of media colleges and institutes; four training sessions have been held so far, the last one on Oct. 8-15. They target the imams of the Ministry of Religious Endowments and aim at developing their public speaking and persuasion skills. Courses include teaching the imams how to speak in talk shows, telephone interviews and TV debates. It also teaches them body language for interviews on TV as well as writing sound bites for various types of televised interviews.

An instructor at the Radio and Television Institute where the trainings are held told Al-Monitor on condition of anonymity that the course aims to develop the media skills of the imams so that they can “dominate the religious discourse,” counter extremist views expressed by the Salafists and efficiently debunk false interpretations on religion in TV programs.

The source said that in the past radio and TV programs often have become a platform where self-declared clerics or extremists issued fatwas  - religious edicts - that have nothing to do with the Islamic teaching, which sometimes led to dangerous events on the ground.

The instructor cited as an example several TV programs — mostly broadcast on satellite TV — where Muslim Brotherhood members and Salafist sheikhs declared that the building of churches in Egypt should be banned. After one such program — “Infrad” aired on Al-Asema satellite TV channel in 2013 — several churches were burnt down by zealots. Another example would be the fatwas that said alcohol was allowed or that men could beat up their wives, both of which were contradictory to Islam, according to the source.

“This is why the imams from the Ministry of Religious Endowments need to appear in the media often in order to respond to such fatwas and address widespread religious misconceptions,” the instructor added.

In 2017, the parliamentary Committee on Religious Affairs approved a draft law that banned issuing fatwas through the media unless prior authorization had been obtained from Al-Azhar, the country’s top religious institution. The draft still has to go through the General Assembly to become law.

One of the articles of the draft law stipulates that anyone who appears in the media without Al-Azhar's approval will be sentenced to six months in prison or pay a fine of 100,000 Egyptian pounds ($6,190).

But the draft law is controversial. The Ministry of Religious Endowments — known locally as Awqaf — objected that the right of authorizations should rest with Al-Azhar, saying that this bypasses the ministry, which should be the appropriate authority to grant permissions. The ministry argued that as all of its imams are graduates of Al-Azhar, they were fully equipped to give this permission.

“Fatwas have been an authentic and inherent right to the Awqaf for hundreds of years. Nothing justifies the fact that only Al-Azhar is allowed to grant such authorizations,” Jaber Tayee, the ministry's undersecretary, said in an interview with "Masaa DMC," aired on DMC satellite TV in July 2018.

Parliament has shelved the draft law until an agreement is reached between Al-Azhar and Awqaf, which has so far failed to materialize.

The televised interviews are not the only platforms where Awqaf wants to have a high profile. According to Hosni Hassan, media professor at Helwan University, the main purpose of the trainings is to ensure that the Friday sermons — delivered by imams of Awqaf — are efficient tools to spread the Egyptian state’s version of Islam and to persuade the public.

“Preachers should know when to raise their voice and when to lower it. They should know what words to emphasize or repeat and what logical approaches should be used to convince the audience of the content of the sermon and its purpose in improving the social and religious behaviors. The state — represented by the Ministry of Religious Endowments — is paying close attention to Friday sermons and religious lessons in mosques so they can become tools of improving social and religious behavior,” he told Al-Monitor.

He noted that the media presence of Muslim Brotherhood sheikhs and extremists had declined, so they no longer pose a major threat. “The rate of extremist fatwas has declined since 2013 after the fall of the Muslim Brotherhood, after the group was designated as a terrorist organization and its sheikhs were arrested,” he said.

The ministry announced in 2014 that only preachers licensed by the ministry were allowed to deliver the Friday sermons or teach religious classes in mosques.The ministry organizes a number of exams every year for those wishing to obtain such licenses. In 2015, a new law stipulated that unlicensed preachers who deliver the Friday sermons or teach religious courses in mosques shall be sentenced to imprisonment from three months to a year or pay a fine of 20,000-50,000 pounds ($1,238-3,097).

At the time, many observers said the law was issued because the ministry wanted to prevent extremist religious discourse in mosques that were controlled by imams affiliated with the Muslim Brotherhood or Salafist currents between 2011 and 2013.

The Ministry of Religious Endowments also issued in 2016 a decision that the imams in the mosques deliver a unified Friday sermon.