The conflict over controlling the strategic area of Sinjar along Iraq's borders with Turkey and Syria has made the Yazidis' situation worse. 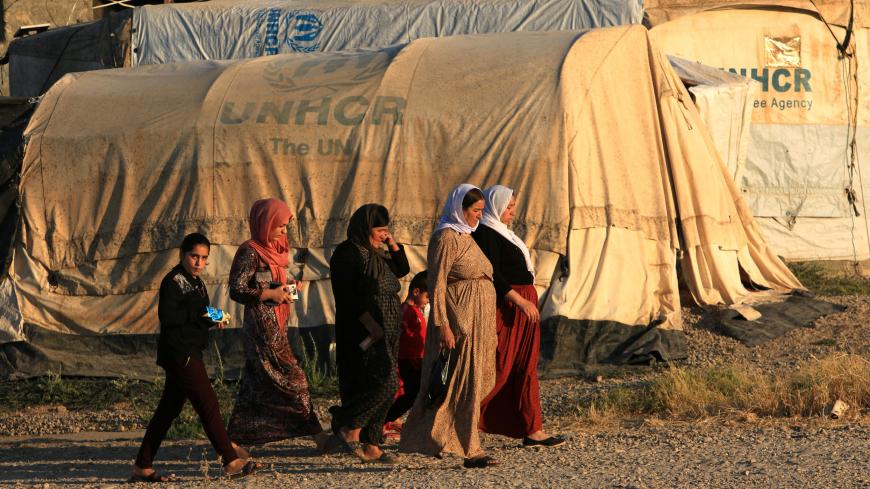 Displaced Iraqi women from the minority Yazidi sect, who fled the Iraqi town of Sinjar, walk at the Khanki camp on the outskirts of Dahuk, Iraqi Kurdistan, July 31, 2019. - REUTERS/Ari Jalal

A statement by the local leader of the Kurdistan Democratic Party (KDP), Mahma Khalil, regarding the need to expel the Kurdistan Workers Party (PKK) from Sinjar sparked a debate among the various political parties on the one hand and between the federal government and the Kurdistan Regional Government (KRG) on the other about the nature of the conflict over the predominantly Yazidi city.

Khalil’s statement also raised questions about the repercussions of Turkish-Iranian-US conflict in an area close to Iraq's borders with Turkey and Syria.

On Aug. 18, Khalil said he had submitted a request to the US Embassy in Baghdad to help expel the PKK from Sinjar and have the displaced return to the city. “The official local administration in Sinjar has called on the Iraqi government, the Kurdistan Region and Washington to establish a buffer zone in Sinjar to contain the PKK,” the statement said.

Khalil said his request would be sent to both Prime Minister Adel Abdul Mahdi's office and the KRG and that the US Embassy is aware of this.

Khalil, who had been the district administrator of Sinjar, has been appointed Yazidi affairs adviser in the KRG parliament. However, he is still going to his office and acting as if he were still administrator, observers said.

In an Aug. 13 statement, Khalil said the city had turned into a safe haven for the PKK, which abducts people, seeks ransom for them and imposes arbitrary punishment on them before the very eyes of the Iraqi army and the Popular Mobilization Units (PMU).

Hafal Tirish Shankali, the head of communications in the Sinjar Protection Units, said the PKK announced its withdrawal from Sinjar after the end of its mission, which consisted of “officially and publicly rescuing the people and liberating the territory from the Islamic State [IS] in coordination with the Iraqi government. [The mission was completed] on April 1, 2018. Since then, there have been no PKK fighters in Sinjar.”

Saman Daoud, editor-in-chief of Ezidi 24, said accusations that the PKK is preventing the displaced from returning to Sinjar illustrate the political hostility between the PKK and the KDP.

The IS invasion brought new actors into the Iraqi arena and changed the balance of power in the region. PKK militants entered Sinjar on Aug. 10, 2014, to fight IS. Yazidi military groups belonging to the PKK entered Sinjar as well. After Sinjar was liberated from IS, each military group took control of a part of the area.

The PKK is present in Sinjar through a military and political wing called the Sinjar Protection Units, which became an official force of the Popular Mobilization Units (PMU) after the PKK withdrew from Sinjar. The members of the Sinjar Protection Units are Iraqi Yazidis residing in the area, so it would be difficult to imagine their expulsion from their own geographic space. This is especially true as they have made sacrifices in the fight against IS, and this plays in their favor among Iraqis.

The Sinjar Protection Units denied any organizational ties with the PKK. But the group, in a written response to Al-Monitor, said the PKK is “a friend of the Yazidi people and is now an official force of the Iraqi state working in coordination with the military and security forces in the region. It joins all campaigns aimed at cleansing the area of ​​IS cells. It also takes charge of internal security.”

Having developed a political party that participated in the recent parliamentary elections, namely the Yazidi Party for Freedom and Democracy, the Sinjar Protection Units now constitute a political concern for rival Kurdish parties.

The Yazidi Party for Freedom and Democracy joined the Yazidi alliance along with three other Yazidi parties — the Yazidi Democratic Party, which is close to the KDP, and two Yazidi nationalist parties, the Yazidi Progress Party and the Yazidi Movement for Reform and Progress.

The coalition declaration document stipulated that a military force to protect the region would be formed and that Yazidi citizens would account for half of this force. Also, the document provided for participation in the upcoming local elections with a unified list.

Turkey opposes the presence of the PKK in Sinjar, as Ankara deems the PKK a threat to Turkey's national security. Ankara also fears the formation of a route linking the Qandil Mountains, the main fortress of the PKKy, to the Sinjar Mountains and then to the Syrian Democratic Forces (SDF) on the second side of the Syrian border. This would constitute a corridor for the transfer of fighters, weapons and logistical support that go against Turkey's interests.

Economically, Turkey is seeking to open the new Fish Khabur crossing with Iraq, from which Turkish goods would then go through Tal Afar and Sinjar and then go to Mosul, Baghdad and southern Iraq. This would increase the volume of trade exchange between Iraq and Turkey and reduce dependence on Iran, a plan Tehran opposes.

Iran is seeking to use the PKK as a card to threaten Turkey's trade with Iraq. Tehran also does not want any party to rival its influence in the south, especially after the restoration of Iraq's relations with the Gulf states, Egypt and Jordan in the framework of Washington's efforts to increase the regional players and bring Iraq back to the Arab ranks while keeping it as far away from Iran as possible.

Amid this conflict, which has taken on regional dimensions, Turkey refuses to allow Sinjar to be turned into a base for the PKK, which Ankara classifies as a terrorist party. Meanwhile, Iran seeks to extend its influence through its allies in order to control the region bordering Syria.

Khalil’s message to the US Embassy reveals a Kurdish desire to let the United States join the competition over the disputed Yazidi area and restore the balance of power to the ruling KRG party.