Putin's offer of defense missile systems for the Saudis was political but there's more to this in the runup to his visit to Riyadh. 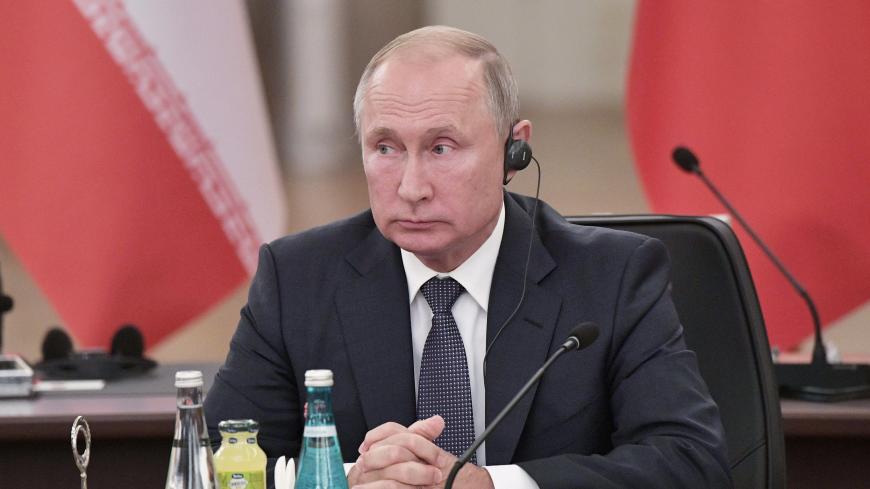 Russian President Vladimir Putin is seen during trilateral talks with his counterparts Hassan Rouhani of Iran and Tayyip Erdogan of Turkey in Ankara, Turkey, Sept. 16, 2019.

President Vladimir Putin on Sept. 16 said Moscow was ready to help defend Saudi Arabia if Riyadh buys Russian weapons. Speaking at a press conference following trilateral talks with the leaders of Turkey and Iran in Ankara, Putin discussed the latest attacks on Saudi oil facilities and presented the Saudis with a choice.

He said  Russia was prepared to help Saudi Arabia defend itself and that the Saudi political leadership "just needs to make a wise state decision, as did Iran by purchasing our S-300s and President [Recep Tayyip] Erdogan of Turkey by acquiring the S-400 missile system.” Putin added, “The systems will defend any Saudi facilities.”

Why it matters: Putin’s offer was of course largely about trolling the US-Saudi military relationship and multibillion dollar arms contracts that don’t seem to have materialized in stronger defensive capabilities.

“I believe it was more of a political gesture, yet sources in Russian military-technical circles speak about the possibility of indeed selling something to Riyadh,” Ilya Kramnik, a leading Russian military analyst with the Izvestia newspaper, told Al-Monitor.

“One has to understand that the attack [on Saudi Aramco facilities] wasn’t some terrorist drone-driven ambush raid,” Kramnik said. “If this was the case, more decent perimeter protection and some rapid-fire gun would do to counter it. But it was a serious long-range missile strike. Hence all the talk about getting them high-quality air defense systems.”

A friend in need? Russia’s budget for this year was predicated on a price of oil of around $60. So the oil spikes caused by last weekend’s attacks on the Saudi refineries have been sending welcome revenues to the national treasury over the last couple of days. Moscow, however, is worried about a potential worsening crisis in the Gulf and fears energy markets may be unbalanced.

The Russian Foreign Ministry released a statement about the attack that contained three key elements. One has to do with the risk of instability in the global hydrocarbon market that may “spell negative consequences for the world economy.” The second one outlines Russia’s view of possible US military retaliation against Iran as “unacceptable.” Finally, the third presents the attacks as an opportunity to have a substantive dialogue about the war in Yemen.

In Ankara, Putin quoted from the Quran to call the parties in the Yemeni conflict to peace.

"And remember the favor of Allah upon you — when you were enemies and he brought your hearts together and you became, by his favor, brothers,” the Russian president said, drawing approval from both Erdogan and Rouhani.

All of the moves Moscow has swiftly taken within days of the attack signal Russia is stepping up its presence as a party that seeks to displace the United States as a key partner for the Saudis.

What’s next: “Be it the S-400 or the Pantsir missile system, there should be a comprehensive solution that would encompass both long-range systems and last line of defense capabilities,” Kramnik said. “Pantsir is good but if there’s a serious cruise missile attack it simply won’t have enough time to engage all of them given its technical parameters.” He added, “The kingdom is a rich country and could afford to buy it, but the bigger issue is how these systems will be organized to be operable and no money could help if there’s no proper match to the operation and service.”

Putin is tentatively scheduled to visit Saudi Arabia and the United Arab Emirates in mid-October. Moscow has been gradually building up the agenda for the visit by first announcing its Gulf security initiative, and is now eyeing military contracts and oil prices regulations.

Know more: Check out Maxim Suchkov’s take on the Ankara summit and Kirill Semenov’s story on how Moscow maneuvers between the Saudis and the Emiratis in Yemen.