Ancient Antiochian mosaics and ruins are securely housed and on display inside a luxury hotel-museum in Antakya. 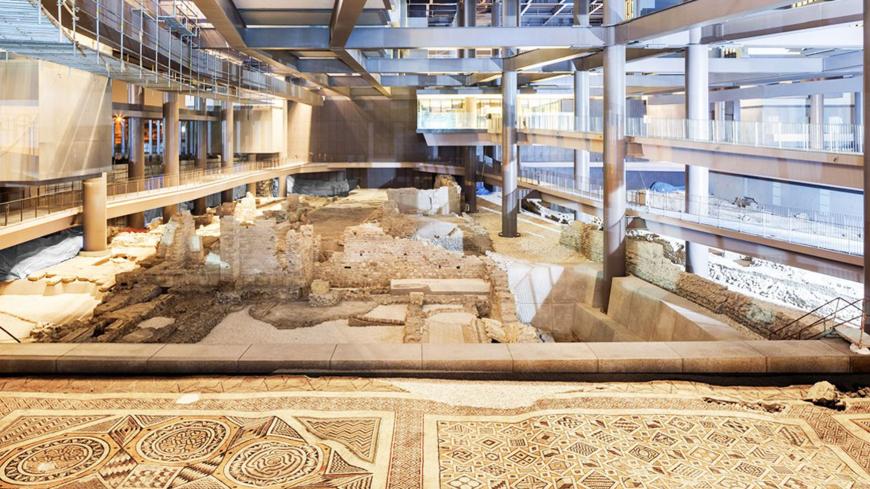 Antakya, a city on the Mediterranean border area between Turkey and Syria, has become home to a new luxury hotel built inside an archaeological park rich in precious mosaics.

In agreement, both lawmakers and scientists have praised the construction of Antakya Museum Hotel as a rare and ideal compromise between private ambitions and public interests, between business priorities and access for all.

In 2009, when the Asfuroglu family decided to build a five-star hotel in a protected area, preliminary excavations revealed the ruins of Antiochia ad Orontem, the second most important city of the Roman Empire — after Rome itself — in terms of population and wealth. Antakya, the capital of Hatay Province that sits over the ancient city, is a major tourism and gastronomy destination.

In the course of the excavations, the layers of a vast public area used for administrative and commercial purposes emerged. It is the agora of the first Hellenistic settlement, dating back to the third century B.C. Its large basilica was built in the third or fourth century A.D., and the area's marble floor and colorful geometric mosaics are still intact.

At more than 1,000 square meters, the mosaics are considered the largest in the world. Spirals, diamonds, triangles and hexagons form intricate patterns. Yellows, reds and browns set a warm tone. The effect is of a giant floating carpet made of small stones.

Once the mosaics were discovered, the first design for the hotel — originally a compact structure with 400 rooms — had to be thrown out and the Asfuroglu family looked for alternatives. In 2010, Turkish architect Emre Arolat was asked to explore the area and come up with ideas. “They expected a miracle from me," Arolat told Al-Monitor.

At first, the architect was reluctant. “I told them they could [end the project] and sell the land or give it to archaeologists." The following day he went back to the area, where spent some time walking around and changed his mind. He then set around designing the hotel.

The design he produced was highly original and expensive: an elongated skeleton of steel columns, set on the margins of the archaeological area so that the mosaics would remain unharmed. On this skeletal structure, he installed 199 pre-fabricated rooms that look like boxes suspended in the air, as if hanging over Antiochia. “There is more steel in that building than the Bosporus Bridge,” Arolat said.

The Museum Hotel, as its name suggests, is hybrid in nature: part hotel with a restaurant, spa, gym, ballrooms and swimming pools on the top floor and part museum, directly managed by the ministry of Culture and Tourism. The Asfuroglus paid for everything: the excavations led by the archaeology museum in Antakya involving 35 archeologists, five architects-restorers and 120 workers as well as construction of the museum itself.

At the hotel entrance on the first floor, visitors are introduced to the history of Antiochia and the excavations through textual displays, videos and a selection of objects found in the area. Then they can walk along a path inside the building to view of the ruins. The ancient city's main thoroughfare is lined with shops and a bath. They can see and almost touch the archeological layers from the city's foundation to the fourth and fifth centuries.

Arolat wanted the place to be open to everyone and visible from the road around the structure. Everywhere inside the hotel — from the rooms, the common areas on the first and on the top floors, the paths connecting the rooms — guests have always an unencumbered view of ancient Antiochia and can experience the sunset, the silence of the night and the sunrise inside the archeological site.

Construction began in 2012 and proceeded slowly, with archaeologists, architects and engineers working side by side. The major challenge was placing the 66 columns so as not to damage the ancient structures. Most of them are just outside the archeological area, forming a rectangle. A few more make up the center of the building, erected in the dry Partenius riverbed.

The construction of one of these central columns unearthed the formal dining room of a Roman villa dating back to the first or second century CE deeper in the ground than the basilica, entirely covered in mosaics. They represent figures of Greek mythology including the winged horse Pegasus and the nine muses, female divinities who where sources of inspiration and knowledge for artists and writers.

The mosaics, which look like paintings, are very similar to those of nearby Zeugma from the same period, exhibited in a superb museum in Gaziantep. In the hall of the hotel, guests can admire them from armchairs.