An earthquake shook Istanbul today in a powerful reminder of the city's vulnerability to quakes and other natural disasters. 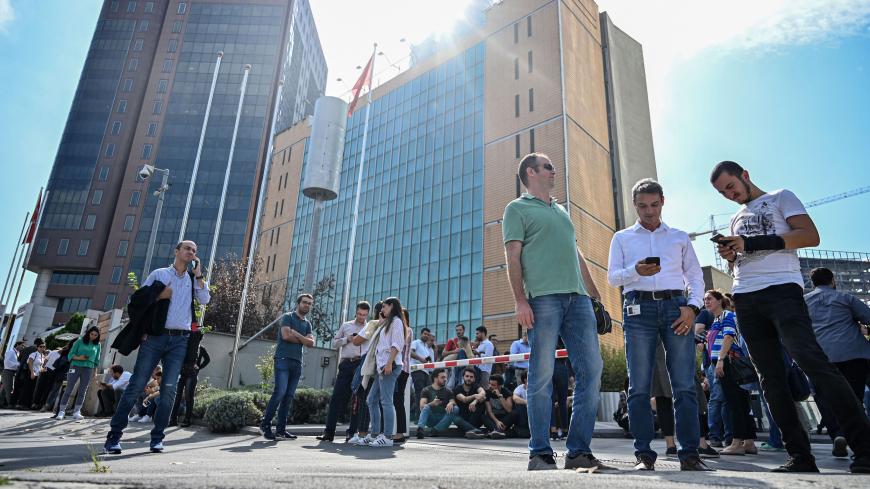 Office workers gather after fleeing their buildings in the Maslak District of Istanbul on Sept. 26, 2019, following an earthquake in the city. - OZAN KOSE/AFP/Getty Images

Istanbul, a megapolis of 15 million-plus inhabitants, was struck by a powerful earthquake today, sparking fear in schools and workplaces. One death as a result of a heart attack was reported after the 5.8 magnitude tremblor struck at 1:59 p.m., causing high-rises to sway and a minaret to crumble. At least 43 people were said to have been injured in the earthquake.

Cellular telephone networks were down for over two hours after the earthquake struck, sowing further panic as residents were unable to reach loved ones.

The Kandilli Observatory and Earthquake Research Institute placed the depth of the tremor at 12.6 kilometers (7.8 miles) and its epicenter 70 kilometers (40 miles) west of Istanbul in the Sea of Marmara. It was felt in neighboring provinces including Tekirdag and Bursa.

Coming on the heels of a 4.6 magnitude quake that hit off the coast of Silivri in Istanbul province earlier this week, today’s earthquake triggered fears of an impending “big one.” Experts have warned that Istanbul is at risk of a major earthquake ever since a 7.6 magnitude quake struck the nearby city of Izmit in 1999, killing over 17,000 people including hundreds in Istanbul.

The earthquake, the second deadliest in Turkey’s modern history, sparked an unprecedented wave of anti-military sentiment when the Turkish Armed Forces rushed to rescue its own first at a naval base in the Sea of Marmara before tending to ordinary citizens. The high death toll in the 1999 earthquake was widely blamed on lax building codes and contractors using shoddy materials including sand.

The authorities’ inadequate response to the earthquake and the culture of corruption surrounding it are cited among the factors accelerating the rise of Turkish President Recep Tayyip Erdogan, and his Justice and Development Party (AKP).

Today, Erdogan and the AKP, in power since 2001, face similar charges. The government is criticized in particular for selling designated public safe spaces to business cronies who have erected malls and other profit-turning edifices on them.

Erdogan pushed back against the claims today, saying there were not “hundreds [or] thousands [but] tens of thousands of safe spaces in Istanbul.” But as if to hedge against the claims, he added, “These may of course be continually updated. There are some safe spaces that serve [as such] today but in line with provincial or district [zoning] plans can be used for different purposes by their owners. And in that case, [Turkey’s Disaster and Emergency Management Authority] can declare [alternative] safe spaces. All of this is subject to change.”

A $500 million earthquake mitigation project for Istanbul funded by the World Bank was completed in 2015. The bank said the project consisted of three components: Preparing for emergencies in the aftermath of earthquakes through risk mitigation measures on individual, family and institutional levels; enhancing emergency preparedness capacity and mitigating seismic risks on high-priority public buildings (schools, hospitals and other public buildings) by retrofitting and/or reconstruction; and lastly, increasing the institutional and technical capacity with regard to building code enforcement at the municipality level.

A key question that will undoubtedly arise is if and how the government intends to cooperate on earthquake preparedness with Istanbul Mayor Ekrem Imamoglu, the opposition dark horse who wrested the city from the AKP with a landslide victory in the June election redo. Imamoglu is being touted as a potential rival to Erdogan, who began his meteoric ascent in politics when he was elected Istanbul’s mayor in 1994.

Istanbul is a major tourist destination with 5.4 million foreigners traveling to the city in the first five months of 2019, according to the Istanbul Provincial Directorate of Culture and Tourism.

In an ominous note, experts at the Kandilli Observatory called on citizens to be vigilant. Asli Dogru, the institute’s deputy director, said, “Since 1999 there is common consensus among scientists that the North Anatolian fault in the Sea of Marmara is accumulating strain. Therefore, we are expecting a big earthquake in the Sea of Marmara.” Dogru added, “For now we cannot say for sure whether this quake is its precursor.”

In July, researchers at the Helmholtz Center for Ocean Research in Kiehl, Germany, reported they had been able to prove for the first time through direct measurements on the sea floor that considerable tectonic strain has built up again on the North Anatolian fault below the Sea of Marmara. Geophysicist Dietrich Lange, who works at the center, said the accumulation would be enough to trigger another earthquake with magnitudes between 7.1 to 7.4.