The Blue and White Party must now focus on persuading Tel Aviv's liberal residents to get out and vote. 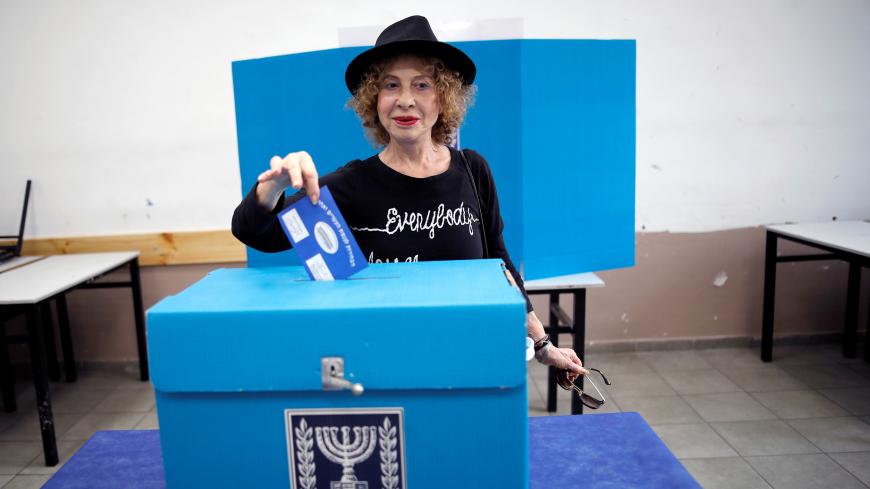 A woman casts her ballot at a polling station in Tel Aviv, Israel, April 9, 2019. - REUTERS/Corinna Kern

Politicians don't usually lose any sleep over Tel Aviv on the eve of elections, as pundits can almost always predict how the city will vote. Tel Aviv is viewed as Israel’s most liberal city and it has historically given much support to Meretz and Labor. It is also very trendy. Middle-of-the-road and ephemeral parties have also gotten the city’s support, such as the Democratic Movement for Change (Dash) in 1977, Shinui headed by Yosef (Tommy) Lapid in 2003, the Pensioners of Israel in 2006 and of course Kadima that same year. Then there was Blue and White in April this year, with 45.7% of its voters from Israel’s first Hebrew city.

If we use the recent April elections as our guide, we can generalize that less than 5% of Tel Aviv voters vote for ultra-Orthodox parties; about 3% for the Arab List and about a quarter to the Likud and its satellite parties. Almost 70% vote for center-left parties in their various configurations.

But too few Tel Avivians vote. In the April elections, approximately 426,000 people were eligible to vote, but the number of voters was only 268,795 — a turnout of only 63.04%. That is about 8% less than the national average of 68.46%. For the right, this was good news, as Tel Aviv has one of the largest pools of center-left voters in the country. As far as the Likud is concerned, this is a great situation. The question is, why are the liberal parties not focusing on voter turnout?

In the upcoming do-over elections, the opposition has a much clearer goal than it had half a year ago. In the April elections, it strove to receives as many mandates as possible as the polls made it clear that a center-left government was not on the table. Therefore, the best bet was on a national unity government with Blue and White and the Likud in some kind of rotation. This time, the goal is clear: to prevent Netanyahu from attaining 61 mandates and bringing the right back to where it was in April. This time, Yisrael Beiteinu is willing to play the game much closer to the center of the map.

Netanyahu’s game is very different, even pathetic: his efforts are invested in advancing the bill to place cameras in polling stations, revealing intelligence on Iran, making various annexation promises and the like. His goal is to achieve the prized 61st mandate for his camp without Avigdor Liberman. The more that left-leaning Israeli voters avoid the ballot booths, the higher his chances will be.

In Maurice Maeterlinck’s famous play "The Blue Bird," people make a trek to search for a very rare and special bird. The long journey comes to an end when the bird is discovered very close to the beginning of the trail. Tel Aviv is the headquarters of most political parties, and most party activities such as discussions in councils and conventions take place there. But the central political activists feel that they are doing real grassroots political work only when they leave the big city to the periphery towns, the Arab localities in the Triangle region and the north, the Bedouin localities in the south, the kibbutzim and the villages.

Far be it from me to discount the importance of these campaigns, to which I devoted much of my adult life. I will never forget how after I’d speak, people would approach me, pat me on the back and utter the same thing: “This is the first time that the party has said this.” And I’d think to myself, I’ve said exactly the same thing so many times, over so many years! But I’d smile, thank the person and continue to the next destination on our busy travel schedule. That pat on the back always made me feel that I was making a real contribution to the political efforts.

But we must not forget the blue bird in Tel Aviv. Our main efforts in this city, at the last moment before the elections, need not be to convince the large public living there that we already have an Arab majority east of the Jordan River and that if we want to ensure a Jewish democratic state, we must erect a border between the Jewish state and a future Palestinian state. Here we don’t have to convince most of the people that children born in Israel to refugees, children who grew up and were educated here and speak Hebrew like our own children and grandchildren, must be allowed to remain in this country. They should not be deported to the Philippines or South America by Jewish hands that suffered more deportations than other nations. We also don’t have to convince them of the urgent necessity for a separation between religion and state, and for ending Israel's status as the only democracy in the world in which the all-important personal status laws are religious laws.

So if this is what most Tel Avivians think, and assuming they have not given up on Israeli democracy, and that everyone knows that one swing vote can change everything, and that they accept the legitimacy of government institutions and that they know the difference between liberals and conservatives, right and left, hawks and doves, secular and religious Jews — then why, oh why, do they remain at home on the one rare day that they can possibly change the situation?

It seems to me that not enough research has been done on the issue of Tel Aviv voting trends, and I hope that such research will be done to try to understand the meaning of such low turnout. But of course there is no chance of that happening before the next election.

In the days and hours remaining until Sept. 17, a party-wide pre-election caucus must be held, ideally an inter-factional gathering with the participation of Blue and White, the Democratic Camp and Labor-Gesher. The purpose of such a gathering? To convince people to vote.

In the American presidential elections, New York is not so important. Everyone knows that the Democratic candidate will win there, and all its representatives in the electoral college who vote for president will be Democratic. There is no point trying to convince New Yorkers to support a Republican candidate, and almost useless to try to convince them to go vote, because the individual states are what count.

Tel Aviv is not New York. Fortunately, our system is not an outdated one from the 18th century. Tel Aviv is very important for elections, even if its voter distribution is predictable. Tel Aviv is where the blue bird of Israel’s liberals is to be found.