Iran's education system needs stability at its upper levels of management, as well as an infusion of new ideas and creative young teachers who are encouraged to rise through the ranks. 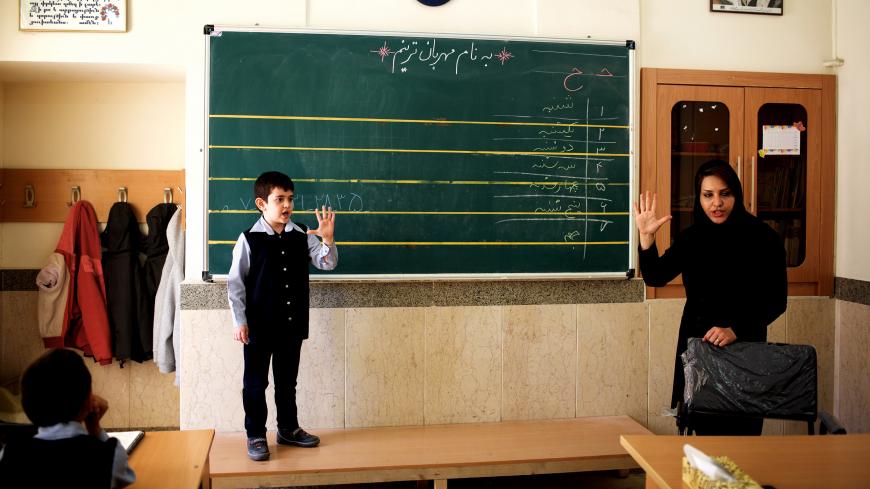 World Teachers’ Day is held annually Oct. 5 to celebrate the role of teachers in providing quality education at all levels. While some local governments in Iran don't permit the day's observance, teachers’ guild associations will often observe the day by issuing statements and holding small ceremonies. Sometimes there are limited protests.

This year's theme is "Young Teachers: The Future of the Profession." The day commemorates the adoption of recommendations reached in 1966 by the International Labor Organization and the United Nations Educational, Scientific and Cultural Organization (UNESCO). UNESCO's concept note on the topic says teachers "too easily serve as scapegoats for the failures of education systems."

In Iran, while a considerable number of talented young people try to enter this profession, in most cases they either face serious obstacles to entry or leave the profession quickly due to a lack of sufficient supports.

One problem in this regard is the structure of largely impenetrable circles of managers in the educational system. These closed groups consist of experienced and, in most cases, aged managers who intensely resist the entry to the higher ranks of management of a young, motivated and creative generation. These candidates often have new insights into modern educational theories, as well as international experiences.

Effective initiatives have been launched in recent years to overcome barriers and senior governmental officials have supported these actions, but dominant older and well-connected education officials have resisted these changes and blocked the promotion of non-insiders to the decision-making layers of the Ministry of Education. A more fitting motto for World Teachers’ Day in Iran, hence, might be "Paving the way for Younger Managers" in all levels of the educational system, along with providing support.

While change is generally needed in the generally sluggish Ministry of Education bureaucracy, too much change in the form of rapid turnover at the ministry's highest ranks and a lack of effective strategy have served as serious obstacles to good policymaking and policy implementation.

During President Hassan Rouhani’s first term, Ali-Asghar Fani was appointed education minister. Three years later, in 2016, Rouhani decided to replace him with Fakhreddin Ahmadi Danesh-Ashtiani. He served less than a year; during the first years of Rouhani's second term, there have been two other education ministers.

This instability at the highest level of the ministry has presented a serious challenge to addressing the problems of Iran's educational system. While Rouhani’s electoral campaign promised to transform the current educational system into a modern and efficient one in line with highest international standards, along with delivering citizens' educational rights, these goals have been abandoned as a result of the rapid turnover of top-level education officials. Instead, efforts have been focused on mundane tasks such as preparing schools, providing educational materials for the new school years, and so on. The long list of essential reforms in Iran's educational system necessitate a long-term perspective. Myopic policy-making has exacerbated the system's inefficiencies and deepened the gap between Iran's status and that of regional and global systems.

In addition, actions taken by one Education Ministry administration have been reversed by the next, to teachers' great disadvantage. For example, although the former administration promised an average wage hike of $120 per month for teachers by the beginning of new school year, Sept. 23, newly appointed minister Mohsen Haji-Mirzaie annulled the proposal. As Haji-Mirzaie isn't delivering on the promises by his predecessor, we are likely to witness even more dissatisfaction among teachers — and they expected more than just a wage raise.

Since the beginning of Rouhani's term in office, there have been considerably lower levels of tensions between teachers’ unions and state officials because of several factors, including their continuous interaction. As officials of Rouhani’s Ministry of Education have been more responsive to public opinion, and particularly that of teachers, unions have pursued their demands through more deliberative means. But the current state of affairs and unresponsiveness of state officials could ignite an other round of protests.

While changes in higher-level bureaucracy can lead to positive and enduring improvements in political, social, cultural and other dimensions of educational constructs, a long-term strategy is needed to consolidate and upgrade plans. Haji-Mirzaie came to office in September with far-reaching proposals, notably, decentralizing the educational system, providing more support for public schools, highlighting the sociocultural role of schools and making schools' financial resources sustainable. Furthermore, he has appointed Ali Tayebnia — a prominent economist with a long history of remarkable performance in several decision-making positions — to lead the ministry's Economic Committee. This indicates Haji-Mirzaie's determination to address financial complexities in the ministry.

As Rouhani’s term in office will end in less than two years — probably along with the moderate forces’ positions in office — the lack of a consolidated educational reform strategy may continue. No matter how progressive and effective his projects are, Haji-Mirzaie will not be able to implement them unless he solves the structural problems of his organization.

In summary, it's unclear whether the promises made by one minister of education will be realized under succeeding officials. The possibility depends heavily on the personal decisions of high-ranking Ministry of Education officials. In addition, it seems the ministry has no practical road map for attracting young talent in line with the World Teachers’ Day motto this year. In addition, current proposals to improve the educational system, though progressive, aren't likely to be implemented efficiently.

Behnam Zoghi contributed to this piece.