United Against Nuclear Iran's CEO embraces the MEK as his group prepared to host Pompeo. 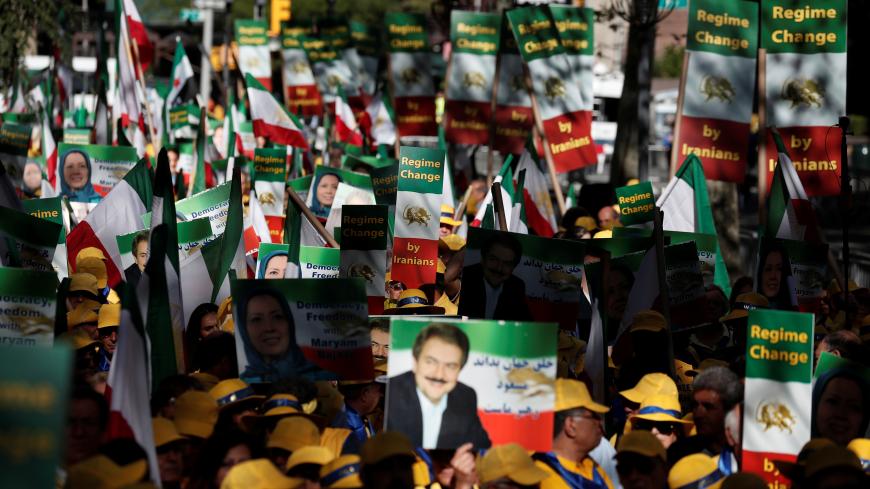 Demonstrators rally to support a leadership change in Iran outside the UN headquarters in New York City, New York, US, Sept. 24, 2019. - REUTERS/Shannon Stapleton

NEW YORK — Leading Iran hawks are increasingly open about their ties to a controversial opposition group, triggering Iranian retaliation and posing a quandary for the Donald Trump administration.

On the eve of the hawkish United Against Nuclear Iran's annual summit featuring Secretary of State Mike Pompeo, UANI CEO Mark Wallace Tuesday convened a gathering of Iranian opposition groups. The event was billed as an unprecedented gathering of diverse opposition groups, including Kurds, Balochs and Azerbaijanis.

“This is the first time in history, since the Iranian revolution in 1978 and 1979, that such a broad cross-section of the leaders and delegates from Iranian dissident … groups have gathered in a convention for Iran's future,” Wallace said. “This gathering demonstrates the willingness of many here today to set aside many of the disagreements of the past.”

But attendance was dominated by the Mujaheddin-e-Khalq (MEK) and its allies. Iran considers the MEK a terrorist group, as the United States did until 2012.

UANI denied any involvement with Tuesday's event and said Wallace convened it in his “personal capacity.” The program for the event at the Roosevelt Hotel, however, listed UANI as the organizer. UANI said that was an error.

The group may be reluctant to be seen as openly rooting for the MEK, which advocates for overthrowing the ruling clerics in Tehran and has critics even among Iranians who oppose Tehran. A Los Angeles-based Iranian American pro-democracy activist told Al-Monitor that people in that community had advised UANI against being involved in an event including the MEK and controversial ethnic separatist groups.

“Terrible choices,” the activist said. “Many separatist groups [were invited] … They [UANI] did not listen.”

Several days ago, an umbrella group of several Iranian Kurdish political parties — including the Kurdistan Democratic Party-Iran (PDK-I), Democratic Party of Iranian Kurdistan (PDKI) and two branches of the left-wing Komala party — announced it would skip the event but did not offer a reason. The event had signs for several of the groups, but their seats were empty.

Openly embracing the MEK could also put the Trump administration in an uncomfortable spot. The administration does not officially support regime change, but recently stopped ruling out the MEK as a political alternative.

Regardless of UANI's denials, Al-Monitor spoke with several participants at the event who believed the group was involved. Tehran seems to think so as well, and announced Tuesday that it would be designating UANI a terrorist group following similar action against the hawkish Foundation for Defense of Democracies (FDD).

“On the one hand, the United States deceitfully speaks of compromise and negotiation,” Iranian Foreign Ministry spokesman Seyyed Abbas Mousavi said Tuesday. “And on the other hand, it organizes, finances and arms criminal and terrorist groups … and provides them with intelligence.”

“I call them the regime of terror,” Giuliani said to thunderous applause. “We're here today, and we're going to support a regime of freedom.”