A delegation from Turkey’s largest pro-Kurdish party paid a visit to Iraqi Kurdistan that many Kurds hoped would lead to renewed dialogue between Turkey and the outlawed Kurdistan Workers Party, but nothing concrete seems to have yet emerged. 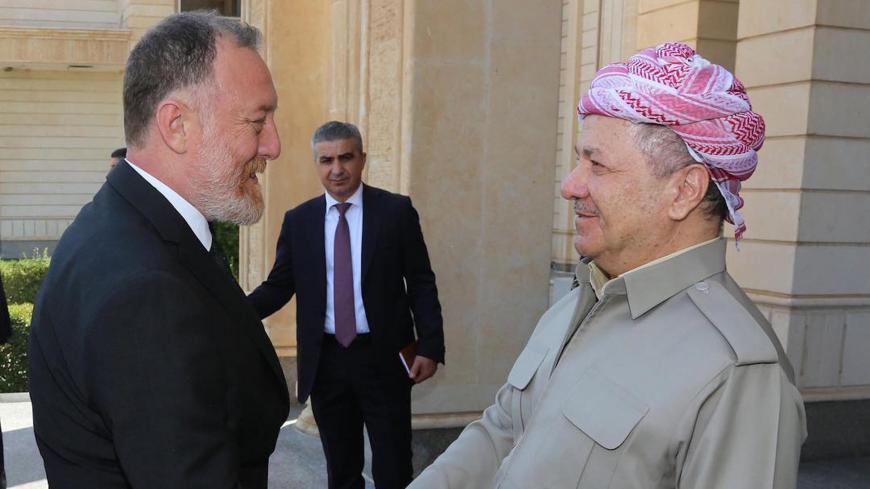 The leader of Turkey’s largest pro-Kurdish party, Sezai Temelli, returned from a high-profile visit to Iraqi Kurdistan that many Kurds hoped was part of a fresh attempt to revive peace talks between Turkey and the outlawed Kurdistan Workers Party (PKK). But while Temelli’s interlocutors said they would support any such initiative, nothing concrete involving the Kurdistan Regional Government is afoot, according to Iraqi Kurdish officials and members of the delegation who briefed Al-Monitor on the visit.

Diyarbakir Imam Tascier, a Democratic People’s Party (HDP) lawmaker who was part of Temelli’s delegation, told Al-Monitor, “The main purpose of our visit was to discuss intra-Kurdish unity. We did not ask for their help and there is no new peace process that has been set in motion that we are aware of, or that involves the KRG.”

Tascier continued, “Erdogan’s rhetoric makes it quite clear that he has no interest in a peace process. Quite the opposite.”

Several KRG officials speaking not for attribution corroborated Tascier. One said, “There is nothing in the pipeline. But the HDP stressed their support for a peaceful resolution and said that the KRG and the Barzanis can play an important role."

He was referring to Massoud Barzani, the chairman of the Kurdistan Democratic Party; his son Masrour, the prime minister; and his nephew Nechirvan, who replaced Barzani senior as president of the Kurdistan Region of Iraq this year. Temelli was received by all three.

Temelli also met with Barham Salih, Iraq’s Kurdish president, in the city of Sulaimaniyah, where the PKK enjoys considerable support. Salih, a skillful negotiator who has the ears of all the main stakeholders, has long advocated peace talks between Turkey and the PKK and could potentially be well positioned to assume a mediating role.

Temelli reportedly raised the issue of Turkey’s ongoing military offensive dubbed “Operation Claw” against the PKK in a mountainous area inside Iraqi Kurdistan that is wedged between Iran and Turkey in his meetings, Tascier confirmed. The KRG’s official position is that the PKK should not use its territory to attack Turkey, thereby provoking retaliatory attacks in which Iraqi Kurdish civilians continue to get killed. This message was repeated to the HDP — albeit couched in diplomatic language — the Iraqi Kurdish officials said.

The Barzanis, Nechirvan Barzani in particular, have good if somewhat bumpy relations with Turkey’s President Recep Tayyip Erdogan. The Turkish leader’s decision to allow the Iraqi Kurds to sell their oil via a purpose-built pipeline carrying it to Turkish export terminals starting in 2014 gave the KRG’s currently stalled bid for statehood a big boost and Ankara firm leverage over the Iraqi Kurds.

Erdogan is also the first Turkish leader to have initiated direct talks with the PKK and its imprisoned leader Abdullah Ocalan aimed at ending the rebels’ 35-year insurgency.

The Kurdistan Democratic Party, which is known to have a good rapport with Murat Karayilan, one of the two top PKK commanders based in Iraqi Kurdistan, helped facilitate the talks. The latest effort collapsed in 2015 because of Erdogan’s domestic political calculations and the conflict in neighboring Syria, where the PKK-linked People’s Protection Units (YPG) has steadily expanded its territory and influence, provoking panic in Ankara.

Erdogan has since overseen a ferocious assault against the HDP, locking up HDP lawmakers, mayors and thousands of party officials and activists, escalating the military campaign against the PKK and holding Ocalan virtually incommunicado.

There was speculation over a possible thaw in May when Ocalan was allowed to meet with his lawyers for the first time in eight years. The timing of the meeting, just before the June municipal elections, sparked speculation that it was intended to woo Kurdish support. But the HDP struck a tactical alliance against Erdogan with the main opposition Republican People’s Party (CHP) instead, allowing it to wrest Istanbul and a string of other big cities from Erdogan’s ruling Justice and Development Party.

Tascier said Erdogan is bent on killing cooperation between the CHP and the HDP “because he recognizes it as the greatest threat to his own power.” A protest being staged by Kurdish families outside the HDP’s provincial headquarters in Diyarbakir who claim their children were kidnapped and forced to take up arms by the PKK is part of an effort “to discredit and marginalize the HDP so that the Turkish public in general and the CHP base in particular turns against us,” Tascier said. The protesters claim the HDP was involved in helping the guerrillas recruit their children and are demanding they be brought back. HDP officials insist that the protest is aimed at deflecting attention from HDP supporters who have been staging their own protest over the dismisal of Selcuk Mizrakli, an HDP mayor, over alleged terror links. Two other HDP mayors were ousted on similar charges. Mizrakli, who denies all the charges, was elected in June with 62% of the vote and set about exposing the corruption and profligacy of a government-appointed administrator who preceded him. Another government-appointed governor has now assumed his duties.

Emma Sinclair-Webb, the Turkey director for Human Rights Watch, told Al-Monitor, "These parents may have legitimate concerns about their children joining the PKK. The government has an obligation to investigate such concerns. The use of child soldiers is a crime." She added, "While not diminishing the seriousness of the issue for the parents, it won't help to instrumentalize the issue politically as we see it, blaming a democratically elected political party whose three mayors have been unlawfully removed."

The charge that the PKK uses under age children is not new. Human Rights Watch said in a 2016 report that it had documented 29 such cases.

The PKK pledged to not use children in an October 2013 protocol signed with Geneva Call, a Switzerland-based nongovernmental organization engaged in conflict prevention. But images of fallen rebels posted on PKK websites suggest the practice continues apace.

However, the idea that the HDP would be institutionally involved in providing child soldiers “or anyone for that matter is absurd,” Tascier said. “The security forces have armored vehicles parked outside the HDP headquarters along with cameras set up to film our every move around the clock. How are we supposed to be serving as a recruiting agency?” he asked.