Why is Hamas reshuffling its security apparatus in Gaza?

Hamas sources have told Al-Monitor that operations against Israel by individuals operating independently are what led the movement to make major changes in the ranks of its security forces in Gaza. 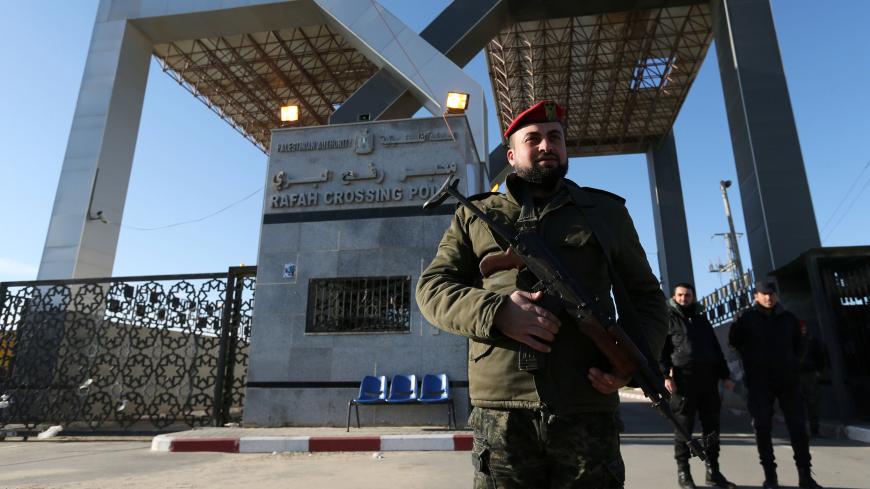 A member of the security forces loyal to Hamas stands guard at the gate of the Rafah border crossing, southern Gaza, Jan. 7, 2019. - REUTERS/Ibraheem Abu Mustafa

GAZA CITY, Gaza Strip — A reliable source in Hamas has told Al-Monitor that the movement is overhauling its security institutions and committees affiliated with the Interior Ministry in Gaza. The shuffle began Aug. 29, with the replacement of the chief of police.

The leadership positions affected were in administration, internal security, border protection, operations, logistics and supply, training, morale and political guidance. Changes were also made at the top at the directorates responsible for financial affairs, planning and development, discipline and private security, reform and rehabilitation, public relations and media, crossings, civil defense and military justice and military police.

“Hamas had wanted to make changes a few months ago,” the source said, “but it delayed the process to give Egypt’s latest efforts [in mid-July] a chance to achieve Palestinian reconciliation. After Hamas was sure the reconciliation remained improbable because of Fatah and President Mahmoud Abbas’ monopolization of Palestinian decisions, Hamas formed a committee to implement the changes.”

The shuffle at the Interior Ministry followed a rocket launched from Gaza falling on Sderot, in southern Israel, on Aug. 25 and a Hamas security delegation arriving Aug. 26 in Cairo at the invitation of Egyptian Intelligence. The attack on Sderot led to a huge fire on a main road and the cancellation of a music festival. Israel responded Aug. 27 by bombing a Hamas military position in north Gaza. The exchange of fire came despite Hamas and Israel having agreed to a cease-fire under Egyptian auspices in April 2019 after a round of violence. The Hamas delegation to Cairo included Rouhi Moushtaha, a member of the political bureau and the movement's representative in Cairo, and Toufic Abu Naim, head of internal security forces in Gaza. The two parties discussed controlling Gaza's borders and reinforcing Hamas’ commitment to the cease-fire understandings with Israel.

According to the local Sama website, Israel's Kan Reshet reported on the same day that Israel had sent a message to Hamas through Egyptian Intelligence stating that it would not hesitate to attack Gaza if more rockets were launched from the territory.

These recent developments have raised the question of whether security forces in Gaza can and will secure the border in the near future and ban the launch of rockets into Israel?

Talal Awkal, writer and political analyst at the newspaper Al-Ayyam, told Al-Monitor, “These changes in positions at the Ministry of Interior are a message to Egypt and Israel indicating that Hamas is actually dealing with securing the border and stopping the launch of rockets into Israel and that it is committed to reducing tensions.”

Awkal noted that the changes occurred after infiltrations, or attempted infiltrations, into Israel by Palestinians operating on their own, independent of any organization. Their actions served to make Hamas look weak in its ability to control Gaza's border with Israel. That said, Awkal also noted that just because Hamas is not launching rockets — so as to preserve the peace with Israel — does not mean that the organization is against missile strikes in principle. What it opposes is launches outside the participation of its joint operations room, which was established in 2017 and includes Hamas, Islamic Jihad, and the Popular Front for the Liberation of Palestine and the Democratic Front for the Liberation of Palestine.

Awkal also offered another theory for Hamas' shuffling of positions. “From a different perspective, the changes in the Ministry of Interior’s apparatus and committees are a result of the strategy of Hamas to implement mergers across ministries and security forces in order to cut costs amid the financial crisis facing the organization.”

Iyad Qara, a political analyst and journalist for the Hamas-affiliated newspaper Felestin, told Al-Monitor, “[Hamas has made] routine administrative changes at the Ministry of Interior to improve the security situation.” He does not believe that the changes were linked to the Hamas delegation’s visit to Egypt. He claimed that the purpose of the delegation was to discuss bilateral ties, cooperation in securing the Egypt-Gaza border and pressuring Israel into committing to a long-term truce.

“[The changes] do not mean that Hamas was unable to secure the border between Gaza and Israel,” Qara said. “There are many Palestinian armed groups [and individuals] that do not understand the cease-fire with Israel. This is why they carry out operations against Israel without Palestinian consent.”

Ibrahim Habib, a security expert and former vice dean at the Gaza Police Academy, saw the shuffle similarly to Qara in one respect. “I agree that these changes within the Ministry of Interior are routine and aim to renew the leadership within the ministry,” he told Al-Monitor. “It is a coincidence that these changes were made amid the security delegation visiting Egypt and rocket fire at Sderot city in Israel.”

Habib further asserted, “[Hamas] does not want to guard Israel, but it wants to stop random operations against Israel since they frustrate its maintaining the cease-fire.”