The Egyptian armed forces completed a high-tech border security system that will boost the Border Guard Forces’ performance and allow better security and response to incidents on the inflamed border. 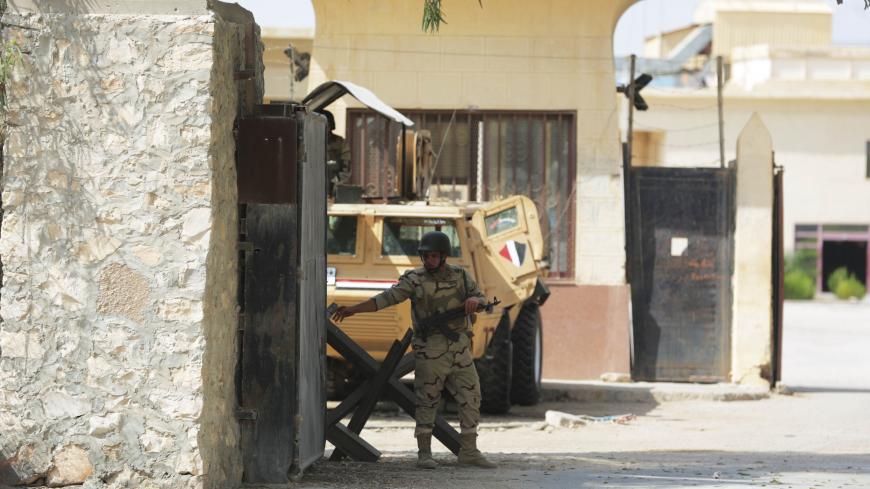 An Egyptian army military vehicle is seen at the Rafah border crossing with the Gaza Strip, Sept. 3, 2016. - Momen Faiz/NurPhoto via Getty Images

Spokesman for the armed forces Col. Tamer al-Rifai wrote in a Sept. 2 Facebook post that the security system was developed as per the most advanced international standards, and that such a step is part of “the constant update of the equipment and devices the commandments and administrations use.”

He explained that multiple new monitoring sites were inaugurated and that the experimental operation of the main control center in the communications systems and networks had kicked off. In addition, Rifai referred to the director of the armed forces' Signal Corps, Staff Brig. Gen. Ahmad Qamhawi, who stressed that upgrading the communications units and ensuring that they have available state-of-the-art systems would help bolster the armed forces’ capabilities and combat powers.

Rifai said that Defense Minister Mohamed Ahmed Zaki Mohamed “inaugurated a number of new monitoring sites and announced the start of the experimental operation of the main control center in the communications systems and networks to manage communications using video conferencing.” He added that the communications’ administration has continued to provide serious training and maintain combat powers, and to be in a high state of readiness at all times, as it focuses on advancing and improving human performance.

In May 2017, the armed forces inaugurated the experimental phase of the 4G military communications network to ensure communications security in the various strategic directions, as well as a number of ad-hoc centers for the Signal Corps after developing and updating them as per cutting edge communications technologies.

Commenting on the importance of developing a communications system for the Border Guard Forces, Staff Brig. Gen. Nagi Shahoud, adviser at the Center for Strategic Studies at Nasser Military Academy, told Al-Monitor, “The situation in the region is critical and Egypt is its backbone. The eastern, western and southern border that the Border Guard Forces secure are at risk. Hence, there should be direct communication between the tunnels in order for the soldiers positioned in post A, for instance, to communicate with the command in post B and the one underground.”

He said, “The Egyptian maritime border and land boundaries are very long. The land border exceeds 2,500 kilometers [1,550 miles], similarly to the maritime border. The land border separates Egypt from Libya, Sudan and Israel, while the maritime border separates the country from the Mediterranean and Red seas. Thus, there is a need for such a developed communications system that would make communications clearer and faster. Subsequently, they would be in the right place at the right time to ensure a quick response to the incidents."

Shahoud explained that the Signal Corps is tasked with providing the armed forces with specialized training and communications equipment and devices. It also provides the military cadets with training on the use and maintenance of stationary and mobile communications devices and equipment, he noted, adding that the Signal Corps is the most important branch of the armed forces, particularly with the developments currently taking place at all levels. He said that since its inception, this branch has kept abreast with developments and has strived to develop its stationary and mobile equipment and train its staff on these devices and on the importance of communications and sharing information on and off the battlefield.

A tense situation prevails on the border with Libya and Sudan. The joint Egypt-Libya border stretches over more than 1,300 kilometers (808 miles) in length, while the Egypt-Sudan border is around 1,280 kilometers (795 miles) long. The latter has been witnessing intermittent acts of violence and large-scale protests since December that resulted in the ouster of Sudanese President Omar al-Bashir. Moreover, insecurity prevails over the border separating Egypt from the Gaza Strip, and terrorist attacks take place every now and then in the large desert in the northeastern part of the country.

Egypt’s border triangle is a source of security concern and poses threats to the country's national security, particularly since terrorism has increased in Egypt. In the past few years, it has served as an entry of arms from the African depth in order to bring terrorism to Egypt.

Speaking to Al-Monitor over the phone, Lt. Gen. Atef Rashed, an expert on strategic affairs, said that security measures have increased on the Egypt-Sudan border since the unrest ignited four months ago. He noted that the unilateral security measures on the border have placed a lot of pressure on the Border Guard Forces in Egypt, particularly since the long border and the lay of the land make it harder for the forces to secure the border.

He noted, "The armed forces are giving a lot of attention to the western military area, on the Egypt-Libya border. For the first time since 2011, new branches, communications units and electronic devices are involved in securing the border line. The air force is working around the clock and the navy is focusing on those trying to arrive by sea.”