Nightclubs, or pavyons as they are called in Turkish, form a well-known but evasive culture with its extravagance and debauchery in Turkey's capital. 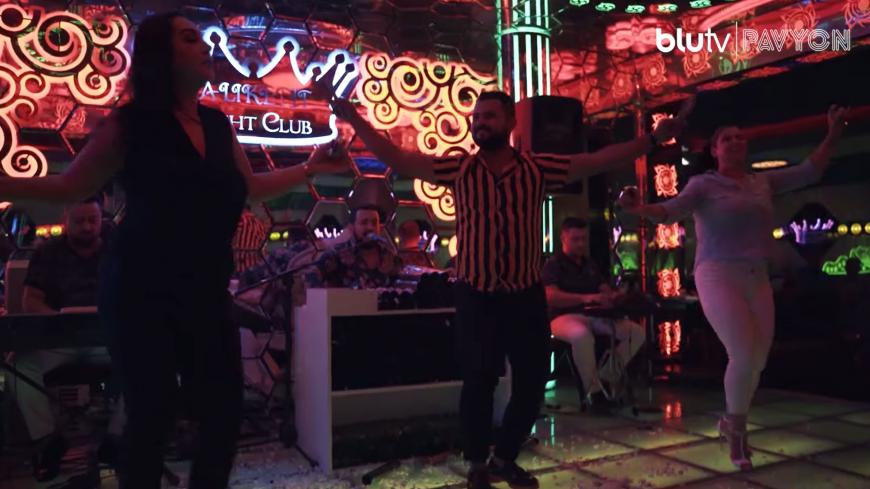 Having made its debut earlier this summer on the increasingly popular Turkish streaming site BluTV, the show “Pavyon” ("Nightclub") takes a close look at a deep-rooted, culturally-specific and infamous type of nightlife that is particularly prominent in the capital of Ankara.

The show gets its name from a type of glitzy Turkish nightclub where the music is bombastic, booze flows freely and men pay to have attractive, heavily made-up women keep them company at their tables. Its racy and frank content is notable given legislation that went into effect last month, enabling the Radio and Television Supreme Council (RTUK) to regulate content produced by sites like BluTV and Netflix.

A number of the original series on BluTV have created significant buzz due to their original and uncompromising content. The modern classic "Behzat C," a popular cop show that aired on mainstream television between 2010 and 2013, was recently relaunched on the platform, not surprising since the show's relentless vulgar language and violence has made it persona non grata on the heavily censored and sterilized atmosphere that is mainstream television in Turkey today.

The stifling censorship on the mainstream networks has made online content increasingly popular and relevant in Turkey, a fact to which President Recep Tayyip Erdogan's ruling Justice and Development Party (AKP) government has not turned a blind eye. BluTV's subscriber figures reached an impressive 4 million as of the beginning of this year, in no small part due to the exclusive content it offers. It was announced on Sept. 3 that BluTV and Netflix along with hundreds of other institutions had applied for licenses from RTUK, a requirement of the new regulation.

“The pavyon has always been a well-known but mysterious underground culture in Ankara. Many people are both fascinated and intimidated by its extravagance and debauchery. Yet nobody has ever tried to explore and tell the stories of the pavyon in documentary or mockumentary form,” Enver Arcak, an independent researcher and the producer of "Pavyon," told Al-Monitor.

The first episode features interviews with customers, club owners and artists, the women men pay to accompany them and have a flirty conversation with, some of whom are also paid to dance on stage. While "pavyon" comes from the French pavilion, a detached house in the outskirts of a city; in the Turkish context it means a venue where exhibits are on display. Osman Ozarslan, a writer and sociologist, told Al-Monitor that these women are known in Turkey as "konsomatris," from the French "consommatrice" or "female consumer." Ozarslan is the author of "Hovarda Alemi: Tasrada Eglence ve Erkeklik" ("Rascal's World: Entertainment and Masculinity in the Countryside"), a fascinating in-depth look at nightlife in Turkey's rural areas.

“After considering various alternatives, we felt this format would be appropriate since pavyon is essentially based on role-playing in which the konsomatris essentially see themselves as artists portraying lovers for a night. In the pavyon lifestyle, role-playing and reality is intertwined just as in our show. In addition, we had to consider the safety of the characters the stories are based on,” said Arcak of the series' format.

The second episode explores the symbiotic relationship that the female employees share with taxi drivers. It is common for them to pay a driver a fixed monthly rate in exchange for bringing them to and from work on a daily basis. The arrangement ensures the womens' safety while providing reliable income for the drivers.

The music that is centered around the Ankara "oyun havalari" (celebratory folk dances) is perhaps the most crucial element of the Ankara pavyon nightlife. It is rooted in local folk music traditions and is strikingly energetic and participatory, easily adaptable to a club setting though centered around (amplified) Turkish instruments like the Middle Eastern string instrument baglama. It has become extremely popular. On stage, dancers deftly twirl their arms while rhythmically tapping sets of wooden spoons in each hand. Customers can request and pay to have dancers — male and female — come up on stage at a per-song rate, and a high-rolling customer might invite as many as 20 dancers simultaneously in a costly show of bravado.

“The Ankara-style music that is performed made an important breakthrough — particularly after the 1990s — which involved entertainment music that — in terms of lyrics, rhythm and sound — was completely designed to be performed in Ankara nightclubs,” Ozarslan told Al-Monitor.

The humble beginnings of Ankara's pavyon scene had already formed long ago in the villages of the region — a theme explored in the third episode that focuses on the music.

“The pavyon in Ankara is Central Anatolian village entertainment transformed into the city. Even the songs and dances closely resemble a common ceremony observed in Central Anatolian weddings. Late into the wedding night male guests would leave for a place called the 'koy odasi' ['village room'] and entertain themselves with music and female dancers often hired from outside the village,” Arcak said.

The "Pavyon" crew has been filming the show on the go, and Arcak answered Al-Monitor's questions just after shooting the fifth episode. He said reactions have been positive and that negotations are underway with BluTV for a second season, though the recent legislation affecting streaming sites is a looming source of uncertainty.