Turkey’s purchase of Russian air defense systems comes as part of Ankara’s efforts to obtain security and reassurance from Russia against the United States, which, it believes, was behind the 2016 coup attempt. 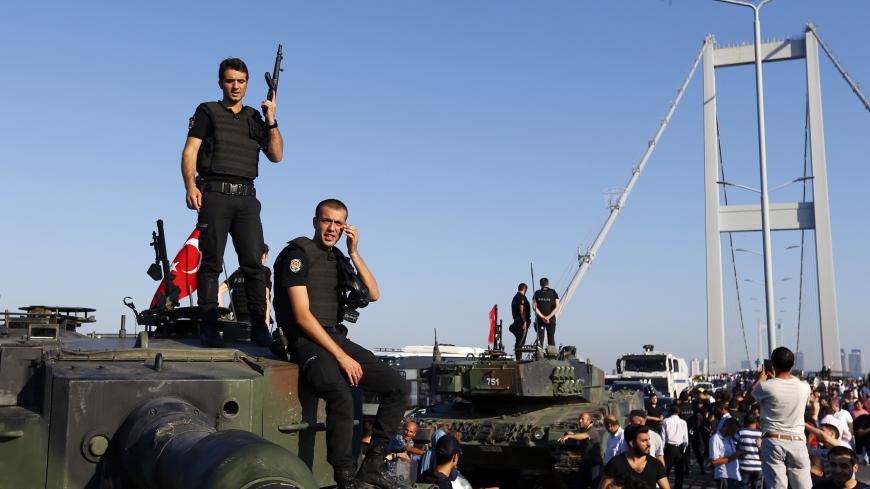 Policemen stand atop military armored vehicles after troops involved in the coup surrendered on the Bosphorus Bridge in Istanbul, Turkey, July 16, 2016. - REUTERS/Murad Sezer

Turkey’s reception of the first batch of the S-400 strategic air defense systems from Russia last month was loaded with symbolism that offers clues on why Ankara made the controversial purchase and the threat perception that prompted the move. In reverse order of importance, they could be listed as follows:

First, the delivery began July 12, three days ahead of the third anniversary of the failed coup attempt of July 15, 2016, which was led by followers of US-based preacher Fethullah Gulen within the Turkish military. This could not have been a coincidence. The delivery had been rescheduled to start in July 2019 upon Ankara’s request, a decision that was announced in April 2018.

As the Turkish servicemen who will operate the S-400s are still receiving training in Russia and the systems are said to become operational in April 2020, there was hardly any military urgency to explain why the carrier components had to be delivered by air. That the missiles would be delivered later by sea was already known. So, the arrival of Russian planes carrying S-400 components on the eve of the putsch anniversary was a flag show signaling that Turkey’s place in the world has changed.

Another important sign was the live broadcast of the Russian planes landing at the Murted air base outside Ankara. Few countries would live broadcast the importation of weapons on their TV channels and online media. The rare spectacle was intended to make sure that the world sees this big moment, symbolizing the change in Turkey’s geopolitical posture and alliances.

The most important sign was the choice of the Murted air base as the place of landing for Russian planes carrying the pieces of a system designed to shoot down NATO warplanes. It was the ultimate cue decoding the symbolism in terms of Turkey’s relations with the United States.

Murted had served as the headquarters of the botched attempt to overthrow President Recep Tayyip Erdogan’s government. The F-16 jets that bombed the parliament and the police special operations center in Golbasi in the capital’s outskirts had taken off from that base, which was called “Akinci” at the time. It is a Turkish tradition to rename places where bad events have happened. So did the air force. Two months after the coup attempt, it did away with “Akinci” and renamed the base “Murted,” the name that had been used until 1995.

The landing of the S-400-carrying Russian planes at the same base from which putschist pilots had taken off exactly three years ago to bomb their “targets” in Ankara was a manifestation of the grave stage the crisis between Turkey and the United States has reached.

NATO member Turkey was well aware that its purchase of the Russian systems would result in its exclusion from the F-35 program, in which it is a co-producer, and preclude its plans to acquire at least 100 F-35 aircraft, including the first four for which payment was already made.

For Turkey’s defense industry, this means losing at least $12 billion in revenues expected from the joint production of the F-35s. Moreover, a Turkey deprived of the strategic superiority of the fifth-generation fighter jets will see its regional deterrence weaken. Last but not least, Turkey is now facing the prospect of US sanctions. Though President Donald Trump is reluctant to penalize Turkey for buying Russian weaponry, as the Countering America's Adversaries Through Sanctions Act requires, there is a bipartisan intent in Congress to slap hefty sanctions on Turkey, which is expected to turn into action in the fall.

The S-400s may be the world’s most efficient high-altitude air defense systems on paper, but this falls short of explaining why Turkey should risk paying such a hefty price to have them. That they are cheaper than their American equivalent, the Patriots, is not a sufficient explanation either, given that the actual cost for Turkey will be many folds bigger than the price difference. Besides, Russia is reluctant on technology transfer, similarly to how things would have stood in a Patriot deal.

So, what kind of a threat perception could have prompted Turkey to buy a weapons system whose actual cost far exceeds its price tag and is thus economically irrational? No doubt, the cost should also factor in the political consequences that Turkey is likely to face in its ties with the West for buying that weaponry from the chief rival of the alliance to which it belongs.

Could the Turkish air force be the source of the perceived threat? Is there perhaps a worry that some rogues might fly the F-16s again to bomb “political targets” in Ankara? If so, the price of countering such a threat brings to mind the Turkish proverb of “burning the duvet for a flea.” Sacrificing the country’s defense industry, its ties with the Western alliance, and major economic interests does not make sense in the context of a domestic threat.

But if the threat emanates from outside the country — and that’s what Ankara has suggested in all its actions and messages since the coup attempt — then all the costs mentioned above begin to make sense.

It was after the putsch that Ankara decided to buy the S-400s. In his first foreign trip after the putsch, Erdogan traveled to St. Petersburg, accompanied by a large delegation, and held talks with Russian President Vladimir Putin. The negotiations on the S-400 deal began after that visit, resulting in the signing of a contract in April 2017.

The extent of the damage the putsch has inflicted on Turkish-US ties and Washington’s resulting loss of influence over Ankara could be illustrated with a single example: In the years before the putsch, US pressure had proved enough to make Turkey cancel a $3.4 billion high-altitude air defense system deal with China.

After the coup attempt, however, the United States did not simply fail to pressure Turkey into dropping the deal with Russia — it was the very source of the threat that Ankara perceived because of the putsch and led it to seek weaponry from Russia.

Given the hefty cost it braves by buying the S-400s, and the magnitude of the impact the move could have on regional geopolitics, Ankara has made a historic choice that is hard to explain away merely with “suspicion” or “mistrust” toward the United States. There is much more —​ Erdogan’s government saw the United States itself behind the coup attempt. It formed a very strong conviction to that effect and positioned itself accordingly. The US administration, meanwhile, neither took this conviction seriously nor made any meaningful effort to dispel it.

On a few occasions, Erdogan openly uttered his belief that the United States was behind the coup. In a speech in parliament in January 2018, for instance, he drew a link between the putsch and a US court case over an Iranian sanctions-busting scheme via banks and companies in Turkey, saying, “Those who failed to pull off the July 15 coup attempt in our country are now out for different coup attempts. That court case in America is the scene of a political coup attempt — it’s not simply some formal step.” According to Erdogan, the aim was to “squeeze Turkey economically,” and the “squeezing operation” involved Gulenists, the CIA and the FBI.

Then, in an opinion piece in The New York Times in August that year — headlined “How Turkey sees the crisis with the US” — Erdogan expressed disappointment that Washington had failed to “unequivocally condemn” the coup attempt and extradite Gulen, who resides in Pennsylvania and is the leader of what Ankara terms the Fethullahist Terrorist Organization (FETO). Erdogan decried also the United States’ partnership with Syrian Kurdish militants linked to the Kurdistan Workers Party (PKK), which both Ankara and Washington list as a terrorist organization. In a blunt conclusion, he warned, “Before it is too late, Washington must give up the misguided notion that our relationship can be asymmetrical and come to terms with the fact that Turkey has alternatives. Failure to reverse this trend of unilateralism and disrespect will require us to start looking for new friends and allies."

Looking from the optics of this article, Turkey has already crossed the warning threshold in the last sentence by purchasing the S-400s from Russia. The acquisition is the embodiment of the Erdogan government’s quest to obtain security and reassurance from Russia against the threat it perceives from the United States.

Since the end of the Cold War, Turkey and the United States had disappointed each other many times before things came to the current point. In 2003, after protracted negotiations, Turkey refused to allow US troops to invade Iraq from its territory. Soon after the invasion, US forces arrested and hooded Turkish soldiers in Sulaimaniyah. Then, in 2004, the PKK resumed attacks on Turkey from its bases in northern Iraq, but up until 2008, Turkey was not allowed to conduct any ground operations against those bases. All those frictions fueled mistrust in the already uneasy relationship between the militaries of the two NATO allies.

The bilateral crisis had further deepened before the coup attempt, as Turkey defied US expectations to engage more actively in the fight against the Islamic State (IS), and the United States, in turn, began arming the Kurdish People’s Protection Units against IS, overriding Ankara’s concerns over the group’s affiliation with the PKK.

In sum, Turkish-US relations, which were in rapport with European geopolitics during the Cold War, failed to adapt to the shift of the security axis to the Middle East after the Cold War ended. And the failure to manage the contradictions between the regional agenda of Turkey’s Islamist government and the American quest for security against jihadist groups led to an inevitable outcome of rupture and collision.