Can Egypt's 'Passage' lead to an Oscar?

"The Passage," an Egyptian film on the War of Attrition following the 1967 Arab-Israeli war, has received an enthusiastic reception at the box office in Egypt and has raised some eyebrows in its treatment of Egyptian-Israeli relations. 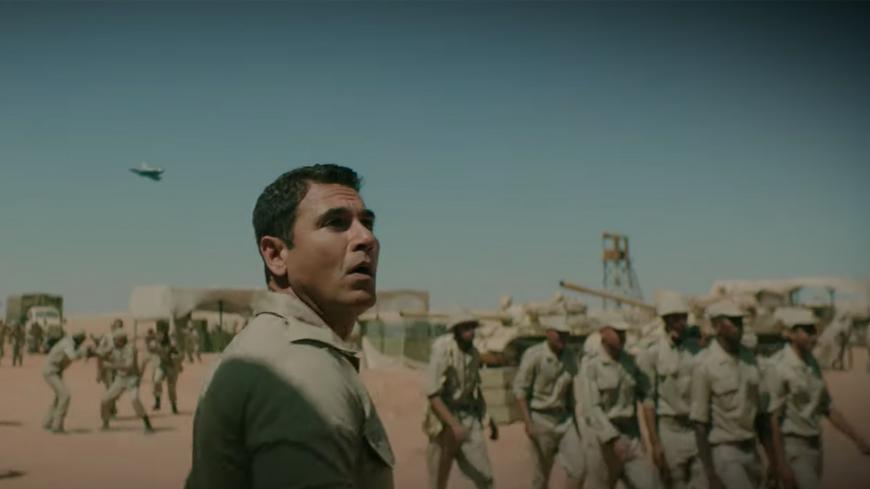 “We will no longer defend, we will attack!” Egyptian Lt. Col. Nour El-Din declares in one of the most compelling scenes in “Al-Mamar” (The Passage), a new movie that takes up the War of Attrition in the aftermath of Egypt's defeat in the 1967 war against Israel. The protagonist Nour El-Din is referring to the change in strategy by the Egyptian army after Israel seized the Sinai Peninsula.

This line can also be considered a reflection of the change in strategy by Egyptian filmmakers taking on Egyptian-Israeli relations after “normalization” between the two countries. Egyptian cineastes have mostly steered clear of the Egypt-Israeli conflict over the Sinai in the last 15 years, ever since“ Youm al-Karama” (Day of Dignity) in 2004.

With a budget exceeding 60 million Egyptian pounds ($3.6 million), “The Passage” is the most expensive Egyptian cinema production to date. The storyline of “The Passage” begins on June 4, 1967, the day before the outbreak of the Arab-Israeli war, and tells the story of the defeat of Nour El-Din's battalion, one of many Egyptian defeats in the Sinai. It then highlights Nour El-Din’s efforts to rebuild and retrain his battalion so that he can execute a commando operation inside Israeli army camps in Sinai during the War of Attrition (1967-70). The “passage” refers to the battalion crossing behind enemy lines to destroy the largest Israeli army camp in Sinai and unexpectedly find Egyptian POWs in the camp.

The film, in sync with President Abdel Fattah al-Sisi’s effort to revive Egyptian patriotism, has been seen by more than a million Egyptians. According to Elcinema.com, an Egyptian film database, as of Aug. 14, "The Passage" had taken in around 73.6 million Egyptian pounds ($4.4 million) after 10 weeks in theaters, putting it in second place for the most revenue generated in the history of Egyptian cinema.

Unsurprisingly, the movie, directed by Sherif Arafa, is far from being a favorite in Israel. In a July 14 article in Haaretz, Zvi Bar’el wrote, “Egyptian film critics attribute the timing of the movie to the new national spirit engendered by President Abdel-Fattah al-Sisi, who in 2017 called on filmmakers to bring nationalist content into their creations.”

He asserted that “The Passage” was not just some “cookie-cutter production depicting Egyptian soldiers as fair, honest and patriotic and prepared to sacrifice themselves for their country,” but also seeks to remind Egyptians who the real enemy is by portraying the Israeli soldiers as sadistic or trigger-happy and Israel as a “wild, warmongering, land-guzzling country.” When it comes to Israel, Bar’el wrote, “The line of defense set by intellectuals, artists and journalists does not recognize political changes.… The guardians of these ramparts will continue to protect their country and their status as the vanguard of the fight for the liberation of Palestine.”

Smadar Perry, an expert on Arab affairs for Yedioth Ahronoth, also attributed the timing of the film to Sisi's recent rhetoric. She wondered, “What Netanyahu will tell Sisi the next time they talk, if he decides to needle him over the film,” writing in a July 17 piece.

The actor Sherif Sobhi attributes the Israeli reaction to the Egyptian government's support of the film through the Department of Morale Affairs of the Armed Forces and primarily because it signals a change in attitude toward Israel.

“In the past, the state, which was involved [in film] through the Egyptian Censorship Authority, would use its influence to narrow the scope of such films,” Sobhi told Al-Monitor, pointing out that blatantly anti-Israeli scenes had been removed from TV series, including “Abed Kerman” (2011), in which Sherif Sobhi played the role of Israeli Defense Minister Moshe Dayan, and “Horseman Without a Horse” (2002).

Under pressure and criticism from the Israeli press, Egyptian Censorship Authority removed scenes about alleged war crimes by Dayan from “Abed Kerman,” according to an unnamed official quoted by the local press.

In “Horseman Without a Horse,” Egyptian intelligence asked that 120 scenes be removed, according to a 2017 interview given by Mohamed Sobhi, who played the lead in the series. The actor said the producers eventually cut some 60 scenes, most of them related to the Protocols of the Elders of Zion, the pamphlet published in Russia in 1903 and used to rationalize anti-Semitism in the early 20th century. An anti-Semitism suit was filed against Mohamed Sobhi at the International Court of Justice for his role in this TV show.

Tarek Desouki, a member of the Egyptian Film Critics’ Association, told Al-Monitor that what concerns Israel is the success of “The Passage” in Egypt and the rest of the Arab world given that it presents a picture of the previously volatile Egyptian-Israeli relationship to new generations who might have been unaware of the Israeli killing of Egyptian POWs in the Sinai.

"Unlike previous war films that didn't achieve success due to [weaknesses in plot and particularly the war scenes], the success of ‘The Passage’ may encourage more producers and scriptwriters to make similar movies,” Desouki said. “[Films such as ‘The Passage’] negatively affect Israel's attempts to normalize, because what they consider normalization is based on the [ignorance] of Arab generations who did not experience the war. Films like ‘The Passage’ will contribute to keeping the conflict situation entrenched even in the minds of those who didn't experience those wars.”

Another reason for Israeli unease about the film stems from Egyptian efforts to show a film touching on the history of Israeli war crimes in international settings, Wagih Ateeq, professor of modern history at Cairo University, told Al-Monitor. The film is shown on external flights of Egyptian airlines and in Middle Eastern and Canadian movie theaters.

Some members of the sector believe that the film may be Egypt’s nominee to the Academy Award for the Best Foreign Language Film.

A critic who had been a member of the Cinematic Syndicate committees that choose Egypt's official nominees to the Academy Awards for Best Foreign Language Film from 2014 to 2018 told Al-Monitor on the condition of anonymity that “The Passage” is among one of the four films that are likely to be chosen this year. The others said to be in the running are “The Guest” (Al-Dayf), “Gunshot” (Eyar Nary) and “Night Out” (Leil Khargy).

Desouki, the film critic, told Al-Monitor that the chances of “The Passage” making it onto the Oscars list are slim due to Israeli criticisms of it. Even if Egypt nominated it to the long list, some Israeli lawyers, he claimed, would take it before the International Court of Justice like they did with “Horseman Without A Horse.” “It is not something that the Oscar Committee would risk,” Desouki said, adding that it was unlikely the film will make it to the shortlist.

According to Sherif Thabet, an art critic, “The Passage” is not Oscar material anyway. Thabet said in June that despite being dazzling from an audio-visual perspective and despite the emotional reaction of audiences to it because it highlights aspects of the Arab-Israeli conflict, the premise has major flaws, some of the characters are superficial and the dialogues are forced.