President Bashar al-Assad’s forces have suspended a cease-fire and resumed airstrikes against Syria’s last rebel stronghold of Idlib, accusing the opposition of violating the truce. 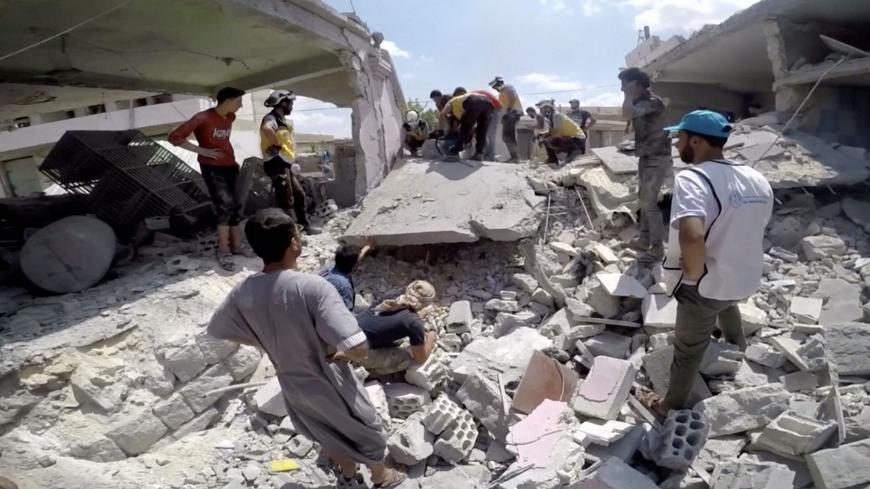 ALEPPO — Regime forces and their allies took control of the towns of Zakat and Arbaeen in the northern Hama countryside on Aug. 7, after fierce battles against the armed opposition using unprecedented heavy, air and ground weapons.

The regime forces began their offensive in the dark of night after paving the way for their advance by bombarding opposition positions, advancing from two axes starting from their positions in Tell Meleh and al-Jabin.

The regime’s heavy shelling forced the opposition to retreat and withdraw from its positions in Zakat and Arbaeen, as Russian and Syrian warplanes launched dozens of airstrikes targeting opposition positions and supply routes, not to mention the simultaneous heavy artillery and rocket shelling.

Mohamad Rasheed, director of the media office of the National Liberation Front (NLF) affiliated with the Free Syrian Army (FSA), told Al-Monitor, “Regime forces and their Russian ally are pursuing a scorched earth policy in their military operations. Helicopters dropped hundreds of bombs and high-explosive missiles on the towns of Zakat and Arbaeen, almost completely destroying both towns.”

Rasheed added, “The NLF has sent additional military reinforcements to the fighting fronts in the northern countryside of Hama. The attacking forces will be confronted and their progress will be stopped. We have several plans to deplete the regime over the next few days through qualitative military operations and concentrated shelling targeting its positions, military barracks, rocket launchers and artillery.”

The opposition used heavy weapons to bombard regime positions in the northern countryside of Hama, targeting the villages of Sheikh Hadid, Jbein, Wadi Hsmin, Braideej and Tell Salba in an attempt to block all of the regime’s advances. The opposition tried to carry out a counterattack to regain control of the two towns, but it failed under the fierce shelling and incurred losses within its ranks. Meanwhile, the opposition noted that the regime forces suffered major losses during the battles, as regime soldiers were killed and various heavy weapons were destroyed.

Activist Abderrahim Hammoud from the northern countryside of Hama told Al-Monitor, “Zakat and Arbaeen, which are under control of the regime forces, are of great importance to them, as this allows them to advance toward other towns and cities in the opposition-controlled northern countryside of Hama. Thus, routes connecting these towns and cities have all come under the regime’s fire as it now seeks to advance toward the cities of Kafr Zeta and Latamna.”

These field developments came after the regime announced on Aug. 5 that a cease-fire agreement with the opposition no longer stands, accusing the latter of violating the truce. The cease-fire was announced on Aug. 2 between the concerned parties and Russia, Turkey and Iran, the guarantor states of the Astana process.

Shortly after the regime forces suspended the truce agreement, Syrian and Russian warplanes resumed their raids targeting opposition positions and cities and towns of Idlib province and its surroundings in the countryside of Hama and Latakia.

The Syrian Arab News Agency quoted an official statement issued by the General Command of the regime's army on Aug. 5, which reads, “The army and the armed forces will resume their combat operations against all terrorist organizations and will respond to their attacks, based on their constitutional obligations to protect the Syrian people and ensure security.”

The Russian Defense Ministry announced on Aug. 5 that the opposition factions fired three rocket-propelled grenades at the Russian base of Hmeimim in the Latakia countryside, but no casualties were reported.

Capt. Abu al-Majd al-Homsi, an NLF military commander, told Al-Monitor, “The regime forces are wrong to accuse us of violating the truce. Everything in the General Command’s statement is false. The regime forces were the ones who violated the truce since day one with their continuous artillery and rocket shelling against our positions.”

Homsi added, “We did not bomb the Hmeimim base as the Russian Ministry of Defense claimed. Russia and the regime are using this as a pretext to resume the battles and go back to killing civilians and destroying villages. These excuses are illogical and unrealistic.”

Although the regime forces have exhausted their power in previous battles with the opposition since the beginning of May, they are trying to resume the fight and are making efforts to have the upper hand by heavy shelling, turning opposition-controlled towns into piles of rubble.

Meanwhile, the opposition also seems exhausted, but it does not want to surrender and has thousands of trained fighters who do not want to lose Idlib province and its surroundings as the last opposition stronghold in northern Syria.

Col. Mustafa Bakkour, a military commander in the FSA’s Jaish al-Izza, told Al-Monitor, “The regime and its Russian ally are deceitful, and we were sure they would break the truce and the cease-fire, so we were vigilant. We kept our fighters on standby throughout the short truce days.”

Bakkour added, “The Syrian regime and Russia believe that by increasing brutality and intensifying heavy aerial and ground bombardments they can control Idlib. They consider this a victory. They are lying and know that the world is not buying their excuses. They simply decided to end the truce and resume the fight, and we are ready to defend the last bit of our land.”