Police brutality has reared its head as demonstrations continue in Diyarbakir over the replacement of three Kurdish mayors in Turkey’s Kurdish-majority southeast by state appointees. 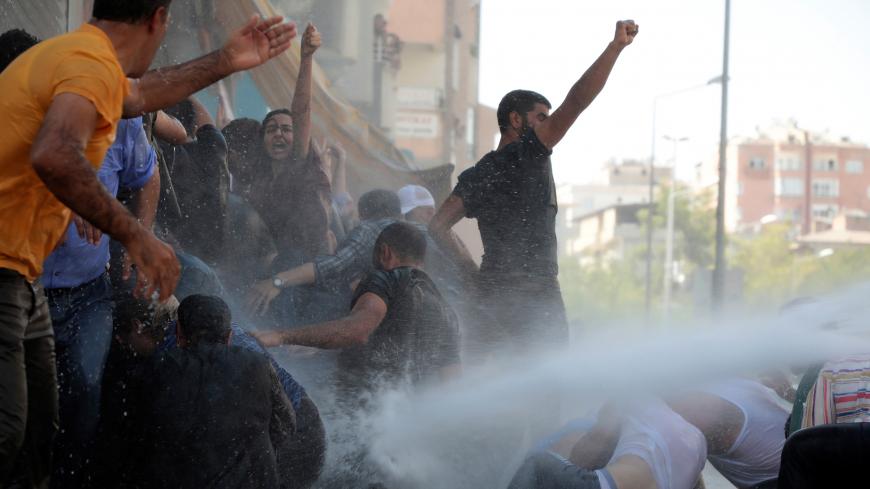 Police use a water cannon to disperse demonstrators during a protest against the replacement of Kurdish mayors with state officials in three cities, in Diyarbakir, Turkey, Aug. 20, 2019. - REUTERS/Sertac Kayar

Protests over the dismissal of three Kurdish mayors from key cities in Turkey’s Kurdish-majority southeast region continued for a third day amid shocking displays of police brutality against civilians.

In the Kurds’ informal capital of Diyarbakir, Remziye Tosun, a lawmaker for the left-leaning and Kurd-friendly People’s Democratic Party (HDP), collapsed on the ground as riot police backed by armored personnel carriers sought to disperse protesting crowds with high-pressure hoses. Several journalists covering the scene were beaten by the police, who also used plastic bullets, tear gas and clubs.

Tosun and several other HDP lawmakers were trying to enter the municipality building where a state-appointed governor has taken charge. Ousted HDP Mayor Selcuk Mizrakli, who was elected with over 60% of the vote, is accused of links to the outlawed Kurdistan Workers Party, a charge leveled against all three mayors that apparently did not disqualify them from running in the March 31 local elections.

HDP lawmaker Ridvan Turan said before a modest crowd staging a sit-in outside the building, “Appointing a state administrator is a denial of democracy, a denial of basic rights and freedoms, a denial of a people’s right to govern themselves.” Turan continued, “The government believes that by sowing chaos it can perpetuate its rule. The administrator will go and we will send the fascist [Justice and Development Party] AKP and [its nationalist allies] to the dustbin.”

There was a 500-strong police response for 200 protesters, a small number by the standards of Diyarbakir, where citizens would turn out in the tens of thousands for the HDP before the government crackdown in the wake of the failed 2016 coup.

The HDP also had words for the Kurdistan Regional Government in Iraqi Kurdistan, which is closely allied with Turkish President Recep Tayyip Erdogan. Leyla Guven, another HDP lawmaker, called on Nechirvan Barzani, the president of the Kurdistan Region of Iraq, “to take a stand.” Guven said, “Whatever pain we suffered in the past is because of our failure [as Kurds] to be allied and united,” she said.

In the province of Van, Mayor Bedia Ozgokce Ertan’s functions will be carried out by state-appointed Governor Mehmet Emin Bilmez. His first action upon taking office was to remove a portrait of the country’s secular founder Mustafa Kemal Ataturk and replace it with one of Erdogan. Today, he dissolved the municipal council.

Scenes from Van of police beating a young protester with their clubs and repeatedly kicking him and hitting him on the head went viral on social media, triggering a furious response. HDP lawmaker Ahmet Sik tweeted, “If you want to know what fascism is, what barbarism is, watch this.”

Mustafa Yeneroglu, an AKP lawmaker from Istanbul, joined the chorus of condemnations.

“These scenes in Van are horrible,” he tweeted and vowed that the offending officers would be fired and prosecuted.

The reaction from Turkey’s allies over its latest display of undemocratic behavior has been pretty muted.

The European Union issued a mild rebuke, stating Aug. 20, “The replacement of Selcuk Mizrakli, Bedia Ozgokce Ertan and Ahmet Turk by state governors is of serious concern as it puts the respect of the democratic outcomes of the 31 March elections into question. Dismissals and detentions of local politicians and appointment of trustees deprive voters of political representation at local level, and seriously risk damaging local democracy.”

The State Department made similarly tame remarks today. "It's always concerning when you see the removal of elected officials and their replacement by unelected officials. What we hope is to see that Turkey resolves this matter in away that is consistent with their commitment to democracy," said spokesperson Morgan Ortagus today.

It thus fell upon the Baltimore chapter of the Democratic Socialists of America to show solidarity. “What did HDP do to deserve this treatment?” it asked in a statement. “They won elections on a socialist platform that values the rights of women, ethnic and religious minorities, and the labor movement. They called for a peaceful foreign policy, not just for Turkey but for the Middle East and the entire world. They asked for anti-corruption measures. They demanded the right for oppressed communities, including Kurds, Armenians, Alevis, Assyrians, and others, to be able to speak their own language, celebrate their culture, and practice their religion without being demoted to second class citizenship.”