Former Justice Minister Ayelet Shaked has confirmed reports about Israeli plans to urge residents of Gaza to leave the Strip and never return. 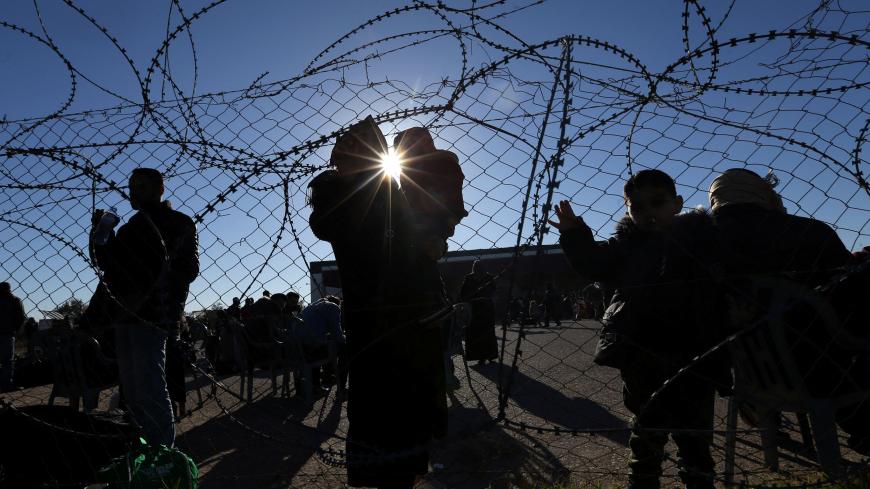 Palestinians stand by a fence as they wait for travel permits to leave Gaza in Rafah, southern Gaza Strip, Feb. 3, 2019. - REUTERS/Ibraheem Abu Mustafa

Prime Minister Benjamin Netanyahu’s Aug. 18 visit to Ukraine first made headlines due to embarrassing gaffes by his wife, Sara Netanyahu. Then came the serious news. A source in Netanyahu’s entourage whose name was not divulged told journalists covering the visit that Israel was willing to encourage one-way emigration of Palestinians from the Gaza Strip. He said that the National Security Council (NSC) had put out feelers to Arab states to see if they would take Gaza immigrants in, but they had refused. The official also told the dumbfounded reporters that the prime minister had approved the plan and the security cabinet had discussed it several times. He added that Israel had expressed its willingness to cover the costs of moving the Gazans abroad and to put Air Force bases (probably the southern Nevatim base) at their disposal to facilitate their departure.

The official did not divulge what foreign governments Israel had approached, but they were probably Gulf states with which Israel has greatly improved diplomatic ties. These countries are in dire need of working hands, whereas the Palestinians, many of them skilled construction workers, would serve as a cheap labor source.

The NSC plan did not take off, but who knows. Israel, it turns out, is so keen to export — or should one say transfer — the Gazans that it has not been preventing individuals who found refuge elsewhere from leaving, and has even encouraged their departure. In 2018, 35,000 Palestinians left the Strip not to return. Most were educated and relatively well to do, including 150 doctors.

A source in Israel’s Civil Administration confirmed to Al-Monitor that in 2018, Israeli authorities received quite a few applications from Gaza residents wishing to move away and willing to pledge never to return. This year, the requests continue. According to the source, most of those leaving are young people from well-established families in Gaza who have relatives abroad (mostly in Europe, but also in Canada and Australia) that are willing to take them in and help them settle in a new country. Israel, which usually makes it hard for Palestinians to leave Gaza, allowed them to go, hoping they would take the Israeli-Palestinian conflict with them.

For Israel’s political right, it's nothing short of a dream come true — getting Palestinians to leave their homes of their own free will. They want to escape the conditions created by the cruel Hamas regime, and Israel cannot be accused of forcibly expelling them. What could be better?

The plan sounded illogical, not to say bizarre, until the leader of Yamina or Rightward, the right-wing alliance running in the Sept. 17 elections, openly confirmed that it was real. In an interview on Israel Army Radio, former Justice Minister Ayelet Shaked called the measure “encouraging emigration,” saying she had repeatedly pushed for its acceptance by the security cabinet. “It is in the interests of both Israel and some of the Gaza Strip residents who want to leave to allow them to do so comfortably and easily,” she explained. “Israel acted stupidly when it did not allow residents of the Strip to emigrate and leave. Many countries in the world have people leaving, entering, moving and immigrating. … Gaza is bursting at the seams; it is a very densely populated enclave. It is time for Israel to wake up and allow anyone who wants to leave to go.”

One of my colleagues in Gaza told Al-Monitor on condition of anonymity that many young Gazans, most of them unemployed university graduates, fantasize about the day they will be allowed to emigrate from Gaza, which has been shut off from the world under an Israeli and Egyptian blockade for over a decade. However, only children from well-to-do families, traders and business people who have amassed property can afford to make their European dream come true, he added. “Who else can emigrate and also find a country where he can live and survive?” he wondered.

My friend could not understand my surprise. The Gaza Strip is like a jail, he said. “If the gates of a prison are opened and prisoners are told to leave, that freedom awaits them beyond the gate, what do you think will happen? Would someone prefer to stay? Israelis do not like the word ‘ghetto’ but you and your government alone have turned Gaza into a closed ghetto and are now starting to prepare plans to expel residents who are choking to death.”

The plan — or should we say fantasy — of the Israeli right is unlikely to pan out. The leaders of Hamas now know that Israel is preparing a sophisticated population transfer and they will be keeping an eye on anyone asking to leave. More importantly, however, instead of addressing the root cause of the Gaza problem and resolving it, Israel has opted for a delusional plan that will only deepen the misery of Gaza’s two million Palestinians.

Wealthy families, traders and sons of traders, well-to-do Palestinians who keep what is left of Gaza’s economy going will leave forever and Gaza will sink deeper into destitution. The population, which has one of the highest birth rates in the world, will decline or at least stagnate — but unfortunately for the delusional Israeli right, Gaza will not disappear. It will simply become poorer than ever and more dependent on the benevolence of outsiders.

There is something disturbing in this plan that attests to the NSC's judgment. Do they truly and sincerely believe that the Israeli-Palestinian conflict can be resolved by encouraging Palestinian emigration? Do they think the conflict will disappear and all will be well? The leaders of Israel’s political right, Shaked and Transportation Minister Bezalel Smotrich, certainly think so. Surprisingly, Netanyahu too has been swept up in this delusional plan, attesting to a serious lapse in judgment on the part of the man who prides himself on being more cautious and responsible than all the rabble-rousers on the radical right.