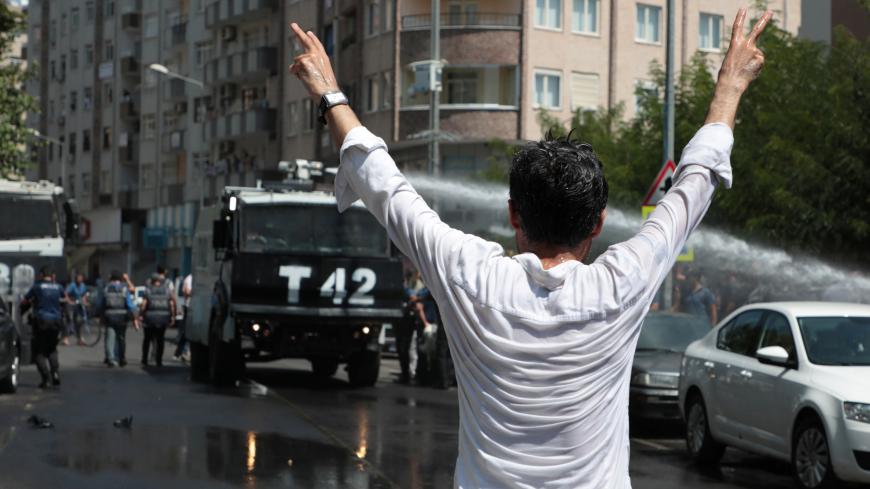 Turkish police use a water cannon to disperse demonstrators during a protest against the replacement of Kurdish mayors with state officials in three cities, in Diyarbakir, Turkey, August 19, 2019. - REUTERS/Sertac Kayar

The Turkish government on Aug. 19 fired three democratically elected mayors from key cities in the mainly Kurdish southeast. The metropolitan mayors of the Kurds’ informal capital, Diyarbakir, along with those of Mardin and Van were removed from office and replaced with government-appointed governors. The Interior Ministry cited active cases of “spreading propaganda” and links to the outlawed Kurdistan Workers Party (PKK) against the mayors who were elected with comfortable majorities in the March 31 local elections on the ticket of the Kurd-friendly and left-leaning Peoples' Democratic Party (HDP).

The mayors were additionally accused of diverting funds to the PKK. Over 400 others were detained on similar charges as security forces swarmed municipality headquarters in separate raids.

The ousters are a repeat of an earlier purge of dozens of Kurdish mayors, many of whom were jailed, on similar charges in the massive crackdown that followed the failed July 2016 coup attempt. Around 40 former mayors and 10 former HDP lawmakers, including the charismatic Selahattin Demirtas, remain behind bars.

Turkey has no system for by-elections for municipalities that fall vacant outside the election cycle. Hence, the governors will run them until the next local elections that are due be held in 2024.

Why it matters: The move is further evidence that Turkish President Recep Tayyip Erdogan has no intention of engaging with the HDP to help revitalize shelved peace talks with the PKK.

This has direct bearing on ongoing talks between Turkey and the United States to establish a safe zone in Syrian Kurdish-controlled territory along Turkey’s common border with Syria. Certain US diplomats who have been quietly backing Ankara’s approach may find it even harder to convince their Syrian Kurdish allies that appeasement with Turkey pays.

Turkey’s apparent strategy is to apply maximum pressure on the PKK to get it to end its armed activities within Turkey and cave to Turkish demands on the proposed safe zone.

Turkey has been escalating attacks against PKK strongholds in Iraqi Kurdistan. It's co-opted Iraq’s Kurdistan Regional Government to help disrupt communication lines between the PKK’s main headquarters in the Qandil Mountains and outposts in Sinjar and Mahkmour, and between Qandil and the PKK’s sister organization in Syria, the US-backed People’s Protection Units (YPG). At the same time, Turkey is pressuring the imprisoned PKK leader Abdullah Ocalan to publicly endorse Ankara’s demands.

Tried and tested: The government’s ham-fisted approach is unlikely to yield the desired results. Successive governments have tried to quell the PKK insurgency through a mix of military muscle and suppression of the Kurdish political parties. Yet the HDP remains as popular as ever, boosting its share in the March polls despite unremitting pressure from the state.

While the PKK faces setbacks in the field due to Turkey’s improved drone technology, it has opened a new if low-intensity front against Turkish forces in Syria’s Afrin.

The YPG’s partnership with CENTCOM has honed the group’s fighting skills. US and Turkish attempts to drive a firm wedge between the PKK and the YPG have proven a nonstarter thus far. Ocalan is unlikely to voluntarily make the sort of calls that would irrevocably tarnish his deity status among the PKK base.

What’s next? Today’s operation will have injected fresh life into Erdogan’s flagging alliance with far-right nationalist leader Devlet Bahceli by proving he’s not going soft on the Kurds.

The silver lining for Turkey’s bleeding democracy is that Ekrem Imamoglu, the new pro-secular mayor of the country’s largest city, Istanbul, roundly condemned his fellow mayors’ ousters in a series of tweets. This may help cement a budding alliance with the HDP, which helped in Imamoglu’s crushing victory in the Istanbul redo.

The poor turnout for the HDP’s press briefing in Diyarbakir is a chilling indication, however, of just how successful the government has been in intimidating ordinary citizens. Yet as they quietly seethe, a steady trickle will continue to head to the mountains and join the PKK.