The Ennahda movement surprised many by putting forward a candidate, Abdel Fattah Mourou, for the presidential elections slated for September. 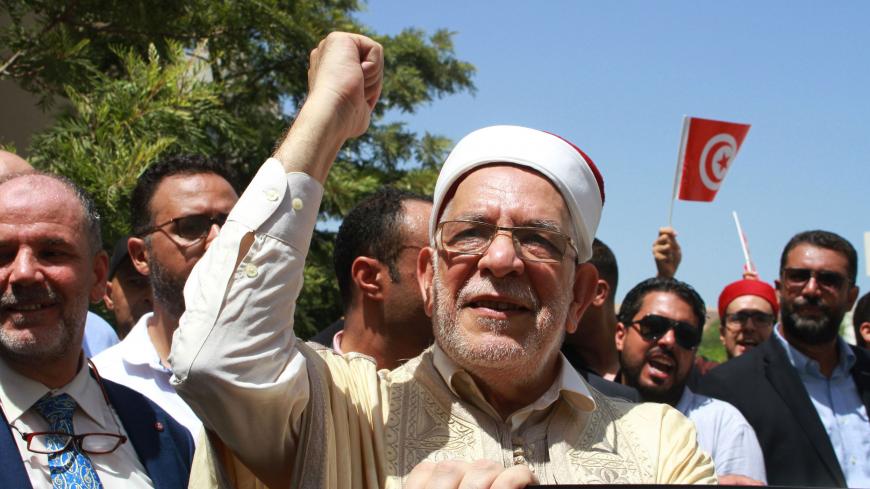 TUNIS, Tunisia — The addition of Ennahda President Rachid Ghannouchi to the Tunis 1 candidate list for the Oct. 6 parliamentary elections and the nomination of Ennahda Vice President Abdel Fattah Mourou to contest the Sept. 15 presidential elections represent a shift in political strategy for Tunisia's moderate Islamist movement. Both decisions were controversial within the movement, though ostensibly aimed at generating unity.

Ninety-eight of the 102 Ennahda Shura Council members approved nominating Mourou, who is also acting speaker of the People's Assembly, and he registered his candidacy Aug. 9. Four members abstained from the Aug. 7 vote. Ghannounchi's surprise candidacy, announced in late July, followed an extraordinary meeting of the party's Executive Council and sparked dissent by apparently stepping on the toes of Ennahda's Shura Council, which according to party rules holds the authority to nominate candidates.

Ennahda spokesman Emad al-Khemiri told Al-Monitor that the movement had decided it was time to contest the presidency after nine years of democratic transition. In the 2014 presidential elections, the movement had chosen to remain politically neutral and give its supporters the freedom to vote for presidential candidates unaffiliated with it due to the precariousness of the nascent democratic effort and because of Tunisians' concerns about the Islam-inspired movement. The movement was also apprehensive about possible negative reactions from certain countries to an Islamist president and the effect that might have on foreign relations and the economy.

Khemiri noted that there are divergent views within Ennahda about nominating a person from within or endorsing a consensual candidate from another party. Some who thought that it was time for Ennahda to nominate a candidate of its own argued that it would boost the movement's presence and profile in the state apparatus. Those holding the opposing view claimed that the current regional dynamics are not reassuring as far as Islamist movements in the Arab world are concerned. The issue, Khemiri said, was settled after the Shura Council voted to approve Mourou's nomination.

“We had tried so hard to find a consensual candidate from outside the movement to be able to satisfy the majority of the [country's] political spectrum, but it was just impossible,” Khemiri said. “This is why we nominated a figure from within the movement after the movement's president, Rachid Ghannouchi, waived his legal right to contest the elections and gave his deputy, Abdel Fattah Mourou, the honor to represent the movement in the presidential elections.”

Some observers believe Ghannouchi chose not to run for president because he polled the worst in voter preferences. Ennahda Shura Council Chairman Abdel Karim Harouni told Mosaique FM on Aug. 4 that Ghannouchi might have his eye on becoming speaker of the parliament.

Khemiri expressed optimism about Mourou’s chances given his five-years as deputy speaker of parliament, his open-mindedness, character and sense of humor. He stressed that Ennahda hopes his nomination, coming amid preparations for legislative elections, will generate enthusiasm among supporters and attract other voters as well. Mourou is well respected among members of parliament, including those affiliated with leftist parties that oppose Ennahda, and is not identified with any sort of fanaticism.

Ziad al-Hani, a media figure and political analyst, described Ennahda’s nomination of a candidate from within the movement as a smart decision dictated by the need to unite the movement’s supporters and leaders and have them vote for one person who will fatefully fight for the movement’s existence and rise above internal divisions.

He explained to Al-Monitor that the movement experienced internal disputes in June following elections by the leadership and rank-and-file members to develop candidate lists for the legislative elections. Some leaders in the movement, among them Mohamed ben Salem and Abdullatif Mekki, accused Ghannouchi of rigging the results, replacing elected candidates with his own preferences, that is, people close to him, ignoring the will of the movement's membership.

According to Hani, Ennahda’s nomination of a presidential candidate has helped calm movement supporters who had been angered by Ennahda’s executive, which Ghannouchi heads, stemming from the list controversy. He believes the nomination will help increase support by encouraging members' involvement in two simultaneous campaigns. Hani also thinks that Mourou’s could make it to the second round because he enjoys broad political and popular support, in part due to his likable personality.

It is noteworthy that Rafik Abdessalem, who oversees Ennahda’s foreign policy and is Ghannouchi’s son-in-law, publicly opposed fielding a presidential candidate, remarking on Facebook, “Despite my respect and appreciation for Sheikh Abdel Fattah Mourou, choosing a candidate from within Ennahda is a wrong choice that does not respond to the requirements of the moment. Unity behind a wrong choice is false unity.” Abdessalem believes that selecting a candidate from outside Ennahda could secure a party and political consensus, which would not be the case with a candidate from Ennahda due to ideological sensitivities.

The Independent High Electoral Commission on Aug. 9 closed the door for registering to run in the presidential elections, and on Aug. 14 announced the approval of 26 candidates and the rejection of 71 applicants.

Prime Minister Youssef Chahed is in the running, representing Long Live Tunisia. Former Defense Minister Abdel Karim al-Zubaidi, running as an independent, has procured the backing of Nidaa Tounes. With the death of Nidaa Tounes' founder, incumbent President Beji Caid Essebsi, the party decided to refrain from nominating a candidate, as no one currently possesses the same degree of charisma and popularity as he did. Zubaidi and Essebsi had been close.

The presidential elections were initially slated for November but were bumped up to Sept. 15 following Essebsi’s death on July 25 at the age of 92.