Why Egypt matters — maybe more than ever

The US-Egyptian partnership deepens in Sinai, but human rights issues won’t go away. 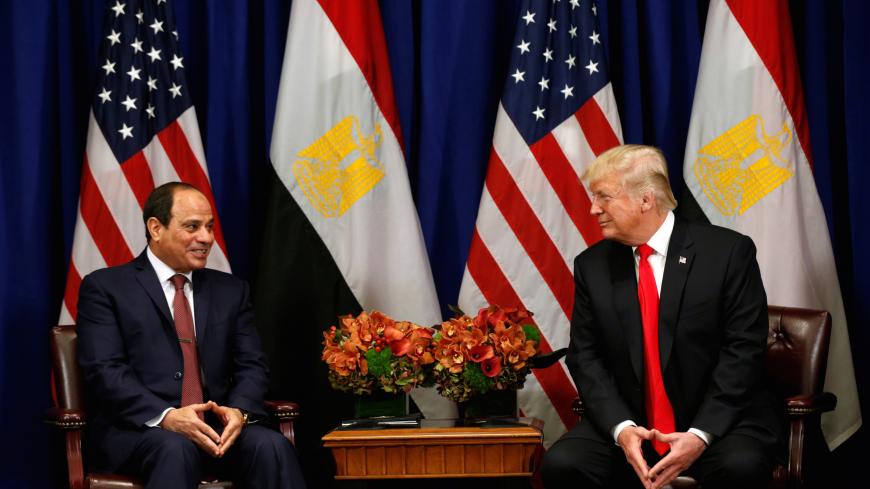 Egyptian security forces this week killed 17 militants it claimed were involved in the terrorist bombing that rocked Cairo Aug. 4, leaving 20 dead and injuring 48.

The retaliation comes as the Donald Trump administration has stepped up its engagement with Egypt, both as a partner in the fight against terrorism and in quietly working the back channels not to let the Israel-Palestinian peace track go off the rails. Increased US engagement in Egypt’s war on terror also brings even more attention to Egypt’s human rights record, which will continue to be an irritant, or more, in bilateral relations.

Did Egypt ever not matter?

Earlier this summer, Steven Cook, an author and expert on Egypt at the Council on Foreign Relations, writing in Foreign Policy, questioned whether Egypt still matters in the region, concluding that small-minded leadership and an inward focus had kept Cairo off the playing field of Middle Eastern politics.

When former President Anwar Sadat made peace with Israel in 1979, it was even then a kind of stepping back from the front lines, changing the entire regional balance of forces, with the intent of focusing on Egypt’s economic development. Sadat’s assassination in 1981, the wars in Iraq, two intifadas and the Arab Spring never derailed the often cold peace between Israel and Egypt.

And, throughout this period, Egypt always mattered. Keeping the Israeli-Egyptian border quiet hasn’t been chump change; perhaps the impact of 1979 so affected the regional balance that we take it for granted these days, and all to the good. And Egypt’s stability seems to be a shared interest of all of the key regional players aligned with the United States — Israel, Jordan, the Arab Gulf states. Take your pick; only the threat from Iran seems to generate such consensus in the region.

Now, in a sign that Egypt’s role may be resurgent, the Trump administration is counting on Egypt for its regional peace plan while offering a hand in its counterterrorism campaign, especially in Sinai.

US offers help with a people-first approach to counterterror operations

Visiting the Pentagon last month, Egyptian Defense Minister Mohammad Zaki outlined an expansive vision of counterterrorism cooperation between the United States and Egypt. US Secretary of Defense Mark Esper offered to step up assistance but advised Zaki to stick with what he referred to as “population-centric” tactics in Sinai “even if it takes longer to be successful,” amid calls from Capitol Hill to condition a larger portion of Egypt’s military aid on rights and democracy promotion, as Jack Detsch reports.

By population-centric, Esper is referring to elements of classic counterinsurgency strategy, which seeks to protect civilians, strengthen government institutions and marginalize terrorists while prosecuting a military campaign. This approach is often associated with the strategy employed by Gen. David Petraeus in Iraq.

Egypt’s effort in the Sinai could certainly benefit from US assistance. Cells linked to the Islamic State (IS) have terrorized the population, including kidnappings, killings, bombings and even beheadings, according to an anonymous correspondent there. The United States is concerned about IS and similar Salafi groups expanding their base and operations in Sinai, especially given IS’s setbacks in Iraq and Syria.

“Despite the Pentagon’s efforts to improve the relationship,” Detsch adds, “Egypt has since 2016 mostly blocked the US military from accessing Sinai to make sure US weapons aren’t used to commit human rights violations, as called for under US aid law.” Detsch cites Human Rights Watch reports in May that Egyptian forces have been implicated in extrajudicial killings and disappearances.

Meanwhile, “Residents of el-Arish, the capital of [the northern Sinai Peninsula] governorate, have been exposed to ongoing attempts by the Egyptian authorities to expel them from their areas, where clashes and armed conflicts have been taking place between the Egyptian army and the Islamic State,” writes a correspondent, the result of a government decree that the al-Arish port and all surrounding buildings and land should be transferred to the armed forces.

The International Monetary Fund has given Egypt good marks so far on its structural economic reform program, and President Abdel Fattah al-Sisi has also pursued development in Sinai as part of his Vision 2030 program. That has contributed a strong economic component to the military campaign there. Detsch reports that during a visit to Sinai in December 2018, Deputy Assistant Secretary of Defense Michael Mulroy observed economic development projects, including a desalinization plant, to provide new economic opportunities. Reham Mokbel writes that northern Sinai Peninsula is experiencing “unprecedented development projects,” including plans for new housing and an industrial zone.

And about the deal of the century …

The Trump administration is also counting on Egypt to maintain its deliberately quiet role to keep the Jared Kushner-led “Peace to Prosperity” initiative in play.

Last month, this column described how Sisi “has his diplomats working overtime to reconcile Hamas with the PA and, in the process, bring some relief for Gaza citizens suffering under the blockade” and to prevent any further escalation between Hamas, the PA and Israel.

Ahmed Youness explains how Egyptian media has mostly been shut down on reporting of the US peace plan, except in line with Egypt’s commitment to stay engaged (without necessarily endorsing or approving) and its commitment to reconciling Fatah and Hamas.

An Al-Monitor correspondent reports that Egypt is thinking through potential energy cooperation, writing that “a well-informed governmental source from the Egyptian group that attended the meeting told Al-Monitor on condition of anonymity that coordination between Egypt, Israel, Jordan and Palestine regarding the [Eastern Mediterranean Gas Forum in Cairo last month] is not to be separated from the economic initiative of the ‘deal of the century.’"

There is a hitch, however. The State Department’s human rights report on Egypt continues to paint a grim picture, and Reporters without Borders describes the country as “one of the world’s biggest jailers of journalists.” Sudarsan Raghavan of The Washington Post reported this week on arrests for online criticism of the Egyptian government, including American citizens. This record sullies Egypt’s claims to regional leadership and will continue to bedevil Cairo with congressional critics and human rights organizations unless addressed with some urgency.

Change will only come if the Trump administration makes human rights part of the agenda in US-Egyptian relations. This is no easy task, as there is a baby-bath water issue here, and we have not even addressed Egypt’s role in North Africa and Sudan. The battle against terrorists, while nothing new, appears to be heating up. And Russia and China, with no such human rights baggage, stand ready to seize any openings to weaken US-Egyptian ties. The key is that US-Egyptian partnership is vital to a shared regional agenda, and human rights, like regional security, needs to be addressed as central to that partnership.