The ultimate measure of late President Beji Caid Essebsi's rule may be the seamless transfer of power to a new Tunisian president. 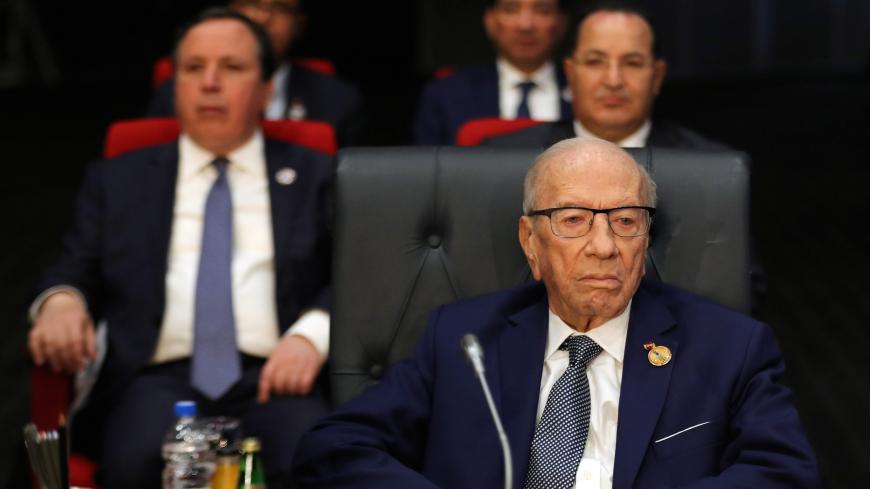 Beji Caid Essebsi, the first democratically elected president of Tunisia, died today aged 92. The president of the parliament, Mohamed Ennaceur, 85, has replaced him in an interim capacity, in line with the constitution.

That Essebsi was in poor health was well known. Rarely appearing in public after being hospitalized in late June, a video posted July 22 by his office showing a clearly frail Essebsi meeting with the defense minister did little to reassure observers concerned for the country’s future. Rumors of Essebsi's failing health had previously reached fever pitch following his second hospitalization during suicide bombings in Tunis on June 27, when reports of his death began circulating widely on social media. Now, with Essebsi's passing confirmed, it can be said that he leaves behind a conflicted legacy.

On the one hand, Essebsi will be remembered for safeguarding the country’s democratic institutions through economic difficulties and several terror attacks as well as being a tireless champion of women’s rights. Aspects that stand to be remembered less fondly, however, include his repeated and ultimately successful attempts to pass legislation providing de facto amnesty to former regime figures and his deliberate sidelining of the country’s Truth and Reconciliation Committee.

To many, Essebsi’s retreat from frontline politics had started long before his recent health concerns. With him assuming the presidency at the age of 88, many questioned the likelihood of him even seeing out his first term. Moreover, as the party he founded, Nidaa Tounes, splintered and ultimately collapsed, Essebsi became embroiled in a long-running series of political battles with his own prime minister, Youssef Chahed, and Rachid Ghannouchi, leader of the moderate Islamist Ennahda.

Questions also hover over the health of Ennaceur, who was reportedly admitted to a private clinic for five days as recently as June. That said, given Ennaceur’s constitutional mandate of only 90 days, his principal responsibilities will be limited to bringing forward presidential elections, originally slated for November 17, to before October 23, when his time in office expires. The Independent Electoral Commission announced today that elections had been set for Sept. 15.

What may prove more contentious is the future of a controversial bill restricting the eligibility of some declared presidential candidates. At the time of Essebsi's death, he had neither signed nor returned the legislation to parliament for amendment. Under the terms of the new law, a number of the current candidates would be precluded from standing, not least Nabil Karoui, the frontrunner and Nessma TV boss.

Though the bill had long been under consideration, after a June poll revealed Karoui to be the leading candidate, some four places ahead of Prime Minister Chahed, action on the bill began in earnest, and it was soon passed from the parliament to the president for his signature. On June 20, presidential political adviser Noureddine Ben Ticha confirmed that Essebsi had refused to sign the bill, stressing that an explanation would follow shortly. Essebsi’s death has rendered that possibility moot.

Whether Ennaceur will have the political confidence or constitutional authority to enact such a divisive law is unclear. Compounding the situation is the absence of the Constitutional Court, which exists in theory only due to four years of parliamentary squabbling since the adoption of the constitution on which it is to rule.

“I doubt Ennaceur will sign it,” political analyst Youssef Cherif told Al-Monitor. “He’s simply a caretaker president, so I’m not sure he even can. Whatever choice he makes, he’s going to face intense criticism. In the absence of a Constitutional Court, my guess is that we’ll enter the elections under the old eligibility laws.” That means a likely victory for Chahed’s chief critic and archrival, Karoui.

What verdict posterity will bestow on Tunisia’s late president is as yet unclear. That he steered the country through some of the worst terror attacks ever visited upon it without losing sight of the democratic ideals that underpinned the country’s 2011 revolution cannot be easily dismissed. Perhaps the ultimate measure of his rule, however, has been the seamless transfer of power to the new president, with neither protest or complaint marring its passing.

by Murielle KASPRZAK and Joseph SCHMID | AFP | May 26, 2022
END_OF_DOCUMENT_TOKEN_TO_BE_REPLACED