A pair of suicide bombers struck the Tunisian capital today, coming amid news that Tunisia’s 92-year-old President Beji Caid Essebsi was rushed to the hospital. 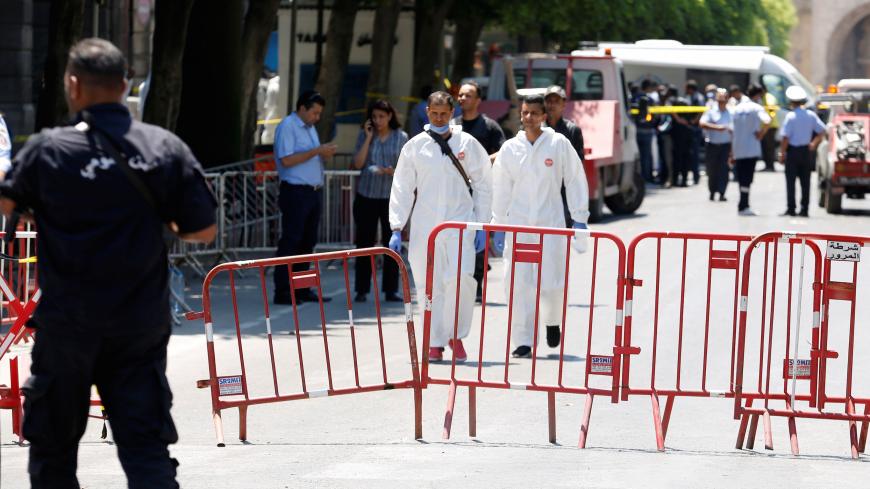 A pair of suicide bombers struck almost simultaneously in the Tunisian capital of Tunis today, killing at least one police officer and wounding several others, including passers-by, according to the Interior Ministry. The blasts came amid news that Tunisia’s 92-year-old President Beji Caid Essebsi was rushed to the hospital. The Tunisian presidency said Essebsi had suffered a severe health crisis, and Tunisian Prime Minister Youssef Chahed denied reports that the veteran secular politician had died.

One of the assailants blew himself up close to a security patrol near the French Embassy on Rue Charles de Gaulle, the Ministry of Interior confirmed, leaving a trail of body parts beside a bullet-riddled vehicle. The second bomber struck the headquarters of the counterterrorism headquarters in al-Qarjani district, wounding at least four people. No one immediately claimed responsibility for the bombings.

Why it matters: Tunisia will be holding critical parliamentary and presidential elections in October and November, respectively, which have already been marred by controversy arising from recent amendments to the country’s electoral laws perceived by critics as aimed at disqualifying recent frontrunners in opinion polls, notably Nabil Karoui and Olfa Terras.

Essebsi had said he would not run as president again, but his presence is widely seen as a calming force in the run-up to the polls. For all of his anti-Islamist rhetoric in recent months, he has quietly maintained a modus vivendi with the country’s most influential group, the pro-Islamic Ennahda — which shares power in government.

Under the Tunisian Constitution, the president — who is elected by the people for a once-renewable five-year term — has a big say over national security, foreign policy and defense matters.

Exploiting the vacuum: Actors could seize on Essebsi’s incapacity and the uptick in terrorism that has shaken the North African nation in recent years as an excuse to postpone the elections. “In addition,” tweeted political scientist and Tunisia analyst Max Gallien, "it may shift conversations away from the country’s economic concerns and back on to security. Both would be deeply concerning.”

Tunisia is the sole country to have emerged from the Arab Spring with a full-blooded if somewhat wobbly democracy. The country has managed to survive a wave of political assassinations and deadly terrorist attacks targeting its security forces and lucrative tourism industry amid rising joblessness and inflation. But it remains under a state of emergency that was extended June 5 for another month.

The Mediterranean haven was beginning to recover from the attacks mainly claimed by the Islamic State (IS) as Western tourists slowly started to file back. Today’s news at the peak of the holiday season will likely put a big damper on that.

It will also set off alarm bells over the country’s ability to cope with returning IS fighters. Thousands of Tunisians joined the militant group, which was vanquished in the battlefield in Syria in March. Some are thought to be redeploying to violence-wracked, neighboring Libya, while others have returned home.

What’s next: With Essebsi’s illness, the divisions racking his crumbling Nidaa Tounes party sparked by the controversial actions of his son will only grow. The president was rushed to a military hospital several days back, but presidential officials claimed at the time that it wasn’t serious. Now they say it is serious, which bodes ill for a recovery.

The matter of who would serve as acting president is undoubtedly a worry. If presidents are unable to perform their duties, it's up to the Constitutional Court to declare the presidency vacant and hand powers over to the prime minister for up to 60 days. If the vacancy exceeds 60 days or if the president is pronounced clinically dead, the speaker of the parliament, Mohamed Ennaceur — no spring chicken at 85 — would normally become acting president. But he too was hospitalized over the past week, as was deputy parliament speaker Abedelfattah Mourou, who would have to step in if Ennaceur can’t. However, Gallien noted, “There is currently no Constitutional Court. So this might be tricky."

Know more: Find out about independents who have stepped into Tunisia’s political fray and about Prime Minister Youssef Chahed’s hard choices before the elections.