The Kurdish region in northern Syria has witnessed several explosions in the past month, with one of them targeting a church. 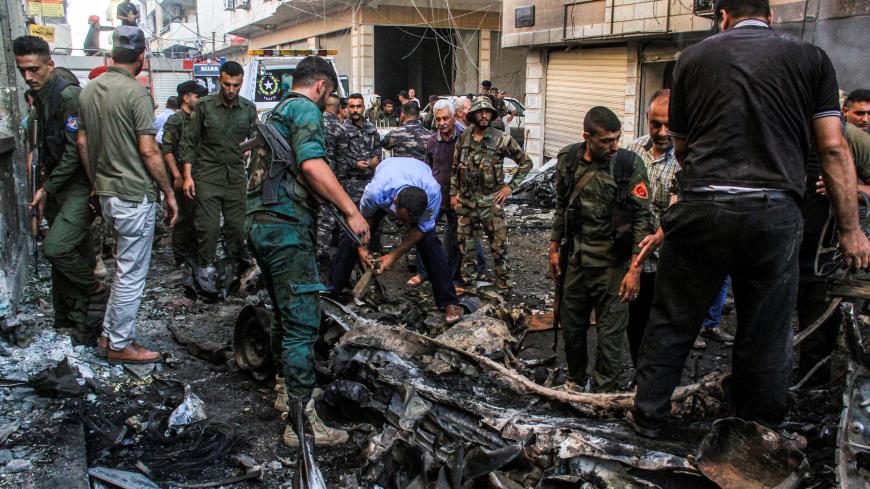 Syrian Kurdish security forces inspect the wreckage of a rigged car that detonated outside the Syriac Orthodox Church of the Virgin Mary in the predominantly Christian neighborhood of al-Wasti in the Kurdish-majority city of Qamishli in northeast Syria, July 11, 2019. - MUHAMMAD AHMAD/AFP/Getty Images

A series of successive explosions took place in Hasakah city in northeastern Syria, leaving about 14 civilians and military personnel wounded and causing extensive material damage. Two explosive devices detonated on the night of July 10, one in al-Ghazal neighborhood and the other on the highway between a fire station and Sinalco beverage company, opposite the Adnan al-Maliki School in Tell Hajar neighborhood.

Also on July 10, a motorcycle was detonated in the town of Markada, injuring three adults and a child. On the morning of July 11, three motorcycles exploded, two in al-Salhiya neighborhood near al-Mashmah roundabout, only 100 meters (328 feet) and about 20 minutes apart. Fifteen minutes later, the third motorcycle was detonated in al-Kalasa district near a police checkpoint. A member of the security forces was wounded in one of the three explosions and extensive material damage was caused.

Citizens in the targeted areas fear that further attacks will take place, forcing them to leave their homes.

Lazkin, from al-Salhiya neighborhood, told Al-Monitor on condition his last name was not used, “It seems we are far from getting rid of such conditions; every now and then some security incident occurs. Our children might have escaped death this time, but if the Islamic State [IS] ideology is not completely eliminated and proper, developed alternatives to the defected security structures are found, we could die in an explosion at any moment.”

Meanwhile, IS claimed responsibility for the rigged van, truck and motorcycles that targeted Hasakah and Qamishli.

The media office of the Kurdish security organization Asayish issued a statement July 11, saying, “We assure all those who seek to undermine the security of our cities and the safety of our people that we will do anything to ensure maximum security and public safety. We will stand beside all the coexisting components on this land.”

On July 11, a van exploded in Qamishli, targeting Assyrian worshippers during prayers at the Syriac Orthodox Church of the Virgin Mary. Eleven people were injured and nearby shops were severely damaged.

Leader of the Kurdistan Democratic Party Massoud Barzani condemned the bloody attacks on the Kurdish areas in Syria on July 11, saying, “We strongly condemn these terrorist operations, and we extend our condolences to the families of the victims of these unfortunate incidents and wish a speedy recovery for the wounded.”

Bashir Saadi, member of the executive office of the Assyrian Democratic Organization in Syria, told Al-Monitor that bombings in the past in the Christian-majority neighborhoods in al-Jazira during the Syrian war resulted in a “sense of instability among Christians, including Assyrians, who believe this poses a real threat to their existence.”

Saadi believes that the security authorities of both the regime and the Kurdish self-administration “could not prevent the bombings or catch perpetrators and bring them to justice.” He noted that in order to maintain their survival, Christians have no choice but to leave al-Jazira because of the bombings as well as the consequences of the ongoing Syrian crisis.

He added that the church bombing sends a clear message “of targeting Christians, including Assyrians, telling them that they are not welcome here and should leave.”

The security forces of the self-administration set up checkpoints and deployed patrols on the main roads, at the entrance of popular neighborhoods, near churches and in Christian-dominated areas in Qamishli.

Asayish condemned the bombings carried out by "terrorist groups," and emphasized that the explosion near the church aims to “target security and civil peace in our regions. We call on citizens to be vigilant and immediately report any suspicious vehicle or activity to the nearest Asayish station in order to completely eliminate terrorism and its supporting cells.”

On July 17, three people were injured when a rigged car exploded at an Asayish checkpoint in al-Ghuayran neighborhood in Hasakah.

Yara Fedwan, a resident from Hasakah, told Al-Monitor, “It seems we will never enjoy peace and quiet. We have had five bombings in two days. It is not about the number of victims, but it seems [the perpetrators] want to send us messages so we leave.”

Fedwan is following up on the aftermath of the bombings on Facebook and believes the IS threat is yet to be eliminated. “Staying in the safety of our homes all the time is not the solution, but it is dangerous to go outside. I believe the terrorists are just waiting for the right opportunity to kill us,” she noted.

As a precaution, Asayish did not allow motorcycles on the streets for a whole week starting July 11. The decision banned civilians and military personnel from riding motorcycles, and only those with an official license plate from the self-administration were allowed out.