Russia's controversial S-400 deal with Turkey is more about constructing a Middle East less dependent on the United States than direct competition. 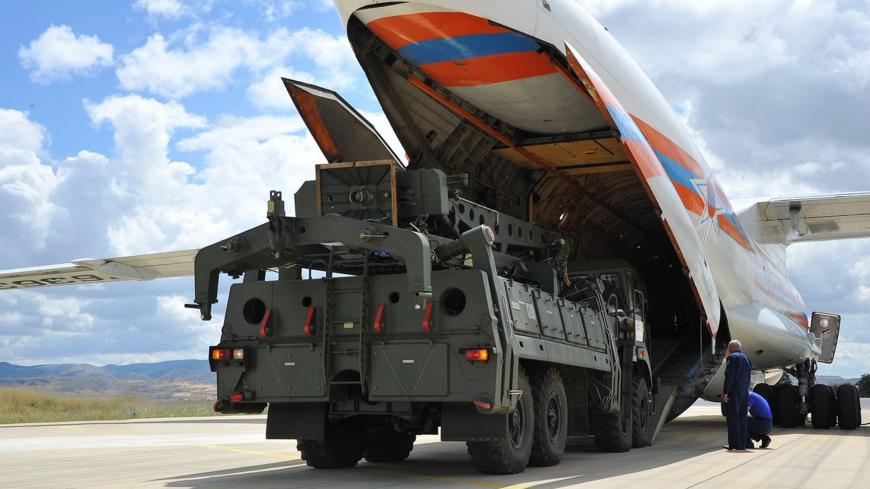 MOSCOW — Russia sent Turkey a seventh batch of components for the S-400 missile systems over the weekend. The deliveries began on July 12 with three cargo planes delivering several tractors and a loading vehicle from the S-400 complex to Murted Air Base. The deliveries are set to be completed by April 2020 and Turkey expects to dispatch more specialists to Russia for training on operating the missile defense system.

"Their current number is not enough. Now there are 100 specialists but this number may be increased tenfold," Turkish President Recep Tayyip Erdogan said on Sunday. Erdogan hailed the S-400 deal as “the most important agreement in [Turkish] modern history.”

"Turkey is not getting prepared for war," he stressed. "These missile defense systems are meant to ensure peace and security in our country. We make other steps to improve our defense capacities."

In turn, Moscow said the agreement is critical in that it sets the tone for more robust military-technical cooperation with other Middle Eastern countries. The head of the the Russian parliament's foreign affairs committee, Leonid Slutsky, called the S-400 deliveries “a first shot.” Slutsky has been under US and European sanctions since 2014 over Russia’s takeover of Crimea and the war in east Ukraine.

"Turkey is the first sign. The S-400 and a more advanced armament system from Russia will definitely appear in the region. We will cooperate closely; volumes of such cooperation are huge. I am confident we should increase such cooperation in every possible way," Slutsky said. Russia’s foreign policy toolkit is more modest than that of the United States, yet on a number of occasions it has shown that in the Middle East, the ability to use resources may be more important than the volume of those resources.

Moscow long ago figured out that the American grip on the region hinges to a large degree on its military component. Being unable to compete with the United States in physical presence nor in military procurements — and, frankly, seeing no need to pursue this path — Russia has nonetheless gradually filled niches by selling arms and forging associated military-technical partnerships. For some regional states, such as Egypt and Iraq, Russian proposals offered a solution to reduce their political-military dependence on the United States. For others — the Saudis, for instance — military dealings with Russia are a bargaining chip in talks with Americans to get a better deal for themselves. For the rest of those dealing with both Moscow and Washington, it is a mix of both sets of incentives.

Just like “Russian interference” in the US elections, “S-400” has become a buzzword for Russia’s perceived potency and exposes Western discomfiture. The interference issue is understood as Moscow's attempt to divide (predominately Western) societies to bring populist forces to power. The S-400 and Russia's other military-technical proposals serve to “diversify and conquer.” Moscow wins its partners by providing them a political, military or technological alternative to what the United States has to offer. Technologically it may be not as advanced as the American products, yet at least as Moscow sees it, many world elites today prioritize strategic independence over technology, especially when there is a prospect (that Moscow also offers) of being able to produce its own technology in the long run.

The Russian-Turkish agreement on the S-400 ticks all the boxes for Moscow and Ankara. Pavel Luzin, an analyst of Russian foreign policy and defense, says he sees the S-400 as having become a tool for Russia's foreign policy.

“Russia tries to play the role of alternative power in international relations, and supplies of long-range surface-to-air missiles allow Moscow to establish and/or maintain long-term cooperation with customers like Turkey, China and India,” Luzin told Al-Monitor. “For other states like Qatar, Vietnam and Egypt, a potential S-400 purchase may bring additional options and [create] more room in their foreign policies. So Moscow tries to trade these options with them. However, the prospects of new deals also depend on the US reaction toward the deal with Turkey. If the Americans put enough pressure [on Turkey], the export of S-400 may become less warranted,” he concluded.

The military side of the deal has been a topic of debate ever since it was signed. There are two common concerns over the deal aired within Russia and throughout the Middle East. The first suggests that the Turks may employ the system against Russia’s own aircrafts once the bromance between Putin and Erdogan is over and Moscow crosses Ankara’s red lines in the region. The second is that Turkey may transfer the S-400 technology to the Americans over a separate deal that, the narrative goes, would help the United States adjust their aircrafts for more effective engagement with the S-400 in case of a military conflict with Russia.

Andrei Frolov, editor-in-chief of Eksport Vooruzheniy (Arms Export), dismisses both allegations. “The systems that Russia supplied to Turkey are an export version of the S-400, which significantly differs from what Russia itself uses. Besides, the S-400 is an older system and Russia is now working on a more advanced system,” he told Al-Monitor. Asked whether there were disagreements within the Russian military and senior decision-makers over the sale of the system to Turkey, Frolov conceded, “Any big bureaucracy may have some internal disputes and some may have spoken against the deal, but their opinion eventually was not representative of the Defense Ministry's position."

“If the sales to a NATO member stated were authorized and licensed it means respective Russian military agencies calculated the associated risks,” he concluded.