A small East Jerusalem neighborhood defied Israeli-imposed conditions and held a mass send off for one of their neighbors killed by Israeli police while protesting the demolition of homes and their replacement with a park. 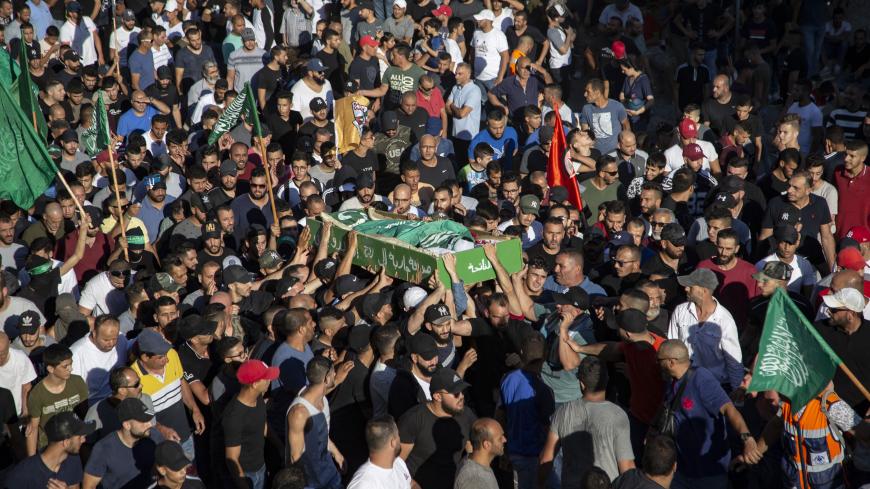 The front page of the July 2 edition of Al-Quds, Palestine’s largest-selling newspaper, spoke volumes. The paper's editors dedicated all eight columns to the huge public funeral for Mohammad Obeid, a young man from the East Jerusalem neighborhood of Issawiya. The headline read, “Martyr Obeid of Issawiya Given a Proper Funeral.” A four-column picture showed the massive crowd carrying the flag-draped body aloft, and Samir Obeid, the slain man's father, being hoisted above supporters’ heads in a sea of people and flags.

Obeid's funeral, and a mass one at that, was not supposed to be held in the middle of the day or in Issawiya. Israeli authorities, who had snatched Obeid’s body from a car en route from the hospital, had insisted that Obeid be given a simple burial at night outside the town with no more than a handful of people in attendance. On June 29, the Israeli High Court had rejected a petition by the Obeid family to retrieve the body so they could give Mohammad a proper burial.

Mohammad Obeid was shot and killed at the age of 20 by Israeli security personnel on June 27 in Issawiya during protests against a park being planned to occupy land where some Palestinian homes are scheduled for demolition. Israel admitted to killing Obeid, but said the officers only fired at him after he threw fireworks at anti-riot personnel. After Israeli troops seized the body, they had tried to negotiate how he should be buried.

The daily protests in Issawiya have since escalated and spread. Eighty Palestinians suffered varying degrees of injuries on June 28 in what the Palestinian media are calling the “Issawiya intifada.”

Arab News reported that Ahmad Budeiri, a former BBC reporter who has been following events in Issawiya, informed it that “the court ordered the body be given back on condition the family agreed that only four people would attend the funeral or they would be fined 20,000 shekels ($5,617).” Obeid’s family rejected the Israeli diktats. They have not been fined.

Obeid had been arrested and held in Israeli prisons at least twice in his short life, for the first time at the age of 15. He was released from the second detention a year ago, to end up being killed by Israelis whose lives were not in danger.

Mohamad Abu Hums, a member of Issawiya’s local follow up committee of activists, told Safa, the Palestinian Press Agency, that Issawiya had been subjected to repressive Israeli measures for two weeks before Obeid's death. “They punish us through arbitrary fines, closure of the entrance to the town and house demolitions,” he said.

Ziad Abu Zayyad, Fatah's spokesman for international affairs, told Al-Monitor, “This collective punishment is aimed at preventing the people of Issawiya from practicing freedom of expression and self-determination of their national Palestinian identity,” he said. Abu Zayyad called the killing of Obeid “another crime that was done without any reason, only to terrorize Palestinian Jerusalemites and pressure them into staying away from political activism.”

Nir Hasson, a reporter for the Israeli daily Haaretz, analyzed the Israeli response in Issawiya in “Israel's Collective Punishing Exacts Price from this East Jerusalem Neighborhood.” He wrote, “The operation has included an influx of dozens of policemen; the erection of roadblocks; vehicles being systematically stopped when leaving the neighborhood; and the issuance of tickets for almost any reason. One person said he was ticketed for not removing the plastic wrapping on the seats of his new vehicle; another for having darkened windows in his car; a third was told his license plate wasn't readable.”

Residents of Issawiya have been subjected to regular raids and arrests by the Israeli army and police for years as well as homes demolitions. Issawiya's curse, it seems, is its location, which is close to the Hebrew University of Jerusalem and the Hadassah Medical Center. Issawiya residents believe they are being targeted to make way for the expansion of the nearby university.

The events of the past few weeks in Issawiya are a reflection of the precariousness experienced by East Jerusalem's 330,000 Palestinians, whom the Israelis insist be part of the State of Israel but without allowing them any form of national expression or tending to their social and development needs.