It's time for Israel-US defense treaty

A defense pact with the United States would mean much more for Israel than statements such as recognizing Israel’s sovereignty over the Golan Heights. 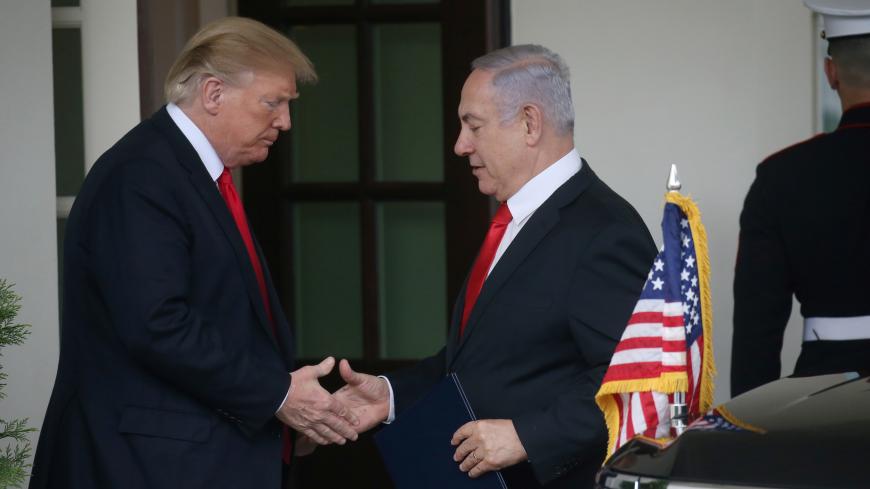 Al-Monitor's Ben Caspit reported July 10 for Maariv that President Donald Trump was considering signing a defense treaty with Israel. Such prospects surface every few years with advocates on both sides and little strong opposition, but such a deal has never materialized.

I tried to promote the idea in the 80s and 90s in the various official positions I held, but the responses from Washington claimed there was no need for anything more than the memorandas of understanding between the countries. At the same time, there was concern in Jerusalem from across the political spectrum that a treaty commitment would curb Israel's independence and tie its hands unnecessarily.

As I wrote in June 2018, Trump’s friendliness toward Israel consists mostly of hollow declarations. Examples include the American recognition of Israel’s annexation of the Golan Heights, the future of which depends on Israeli-Syrian peace and not on any US declaration, and the “economic workshop” in Bahrain at which the administration did not commit a single dollar of its own for the 179 initiatives it presented for the benefit of the Palestinians. The only significant act that future US presidents would be unable to reverse and the implementation of which would depend solely on the United States would be the signing of a defense treaty with Israel by the world’s only superpower.

As of this writing, neither side has denied Caspit’s report. If the two countries are indeed considering such a dramatic move, and even if it stems from Trump’s efforts to save Netanyahu from an election defeat on Sept. 17, I suggest welcoming and encouraging it. I am greatly disturbed by Trump’s term and the way he is running America, as well as by the childish pronouncements and eccentric character of a man who presumes to lead the free world. However, if he were willing to undertake such a move with his penchant for cutting Gordian ties with the swing of a sword, I would salute him.

In the 1950s, under first Prime Minister David Ben-Gurion, Israel was the one to propose such a treaty. In fact, Israel wanted to join NATO, but the United States was reluctant, mainly because it feared the reactions of the Arab states at a time when oil played a central role in its foreign policy considerations. In later years, it was Israel’s security establishment that expressed reservations about a defense treaty, mostly fearing the limitations it would impose on Israel’s independence and the commitment to coordinate any offensive moves in advance with the United States.

After decades of Israeli-American partnership, we have sufficient experience to analyze the situation based on fact and not on speculation. US-Israel strategic and tactical coordination are very close, regardless of who's at the helm of each country. Israel does not operate independently in the international arena. Under international pressure, it withdrew from the entire Sinai Peninsula in 1956 despite its victory over Egypt. In 1973, it refrained from making the first offensive move in what became the Yom Kippur War with Egypt and Syria. It also refrained from attacking Iraq in 1991 after missiles hit central Israel, crippling the country for six weeks. Israel notifies Washington in advance of certain military operations and pulls out of lucrative arms deals if Washington demands it. We need US backing even if there is no formal defense treaty between us. Right now, we impose limitations on ourselves as though such a treaty existed, without gaining the advantages of such a pact in terms of deterrence.

From the US side, this would not be a commitment to protect a small, weak state with whom relations are essentially one-sided. Israel is a Western, democratic bastion in the Middle East with a rare level of technological innovation that it puts at the disposal of the United States. It could further boost the technological intimacy with the United States within the framework of a defense treaty. Potential opposition by Arab states is very different now from what it was decades ago, not only because oil no longer offers the leverage it once did but also because the anti-Iranian coalition has been a game-changer in the Middle East. The United States can also promise pro-Western Arab states that once regional peace is achieved, they too would be candidates for such a treaty.

A defense treaty is not a defense contract nor a defense memorandum of understanding. It is a formal US commitment that cannot be altered according to presidential whim. While defense questions are up to American decision-makers at any given time, it would obviously be much harder to ignore a security threat to Israel under such a pact. Clearly, Israel has felt it needs this deterrence mechanism since the day it was founded.

For the United States, the complex decision that prior US presidents have shunned would possibly entail a renewed military presence in the region. The commitment would require a substantial explanation should a future administration be unwilling to come to Israel’s defense when trouble strikes. For Israel, several important strategic issues would have to be addressed in any treaty with the United States, that it will not be easy. However, both sides have a true interest in another effort to ink such a treaty, and it would be a great pity not to take advantage of Trump’s willingness to make grand pro-Israel gestures.