How Israel, Hamas reached a truce

Hamas leaders realized that Gaza residents won’t put up with Israeli punitive measures such as blocking fuel exports and limiting the fishing zone much longer. 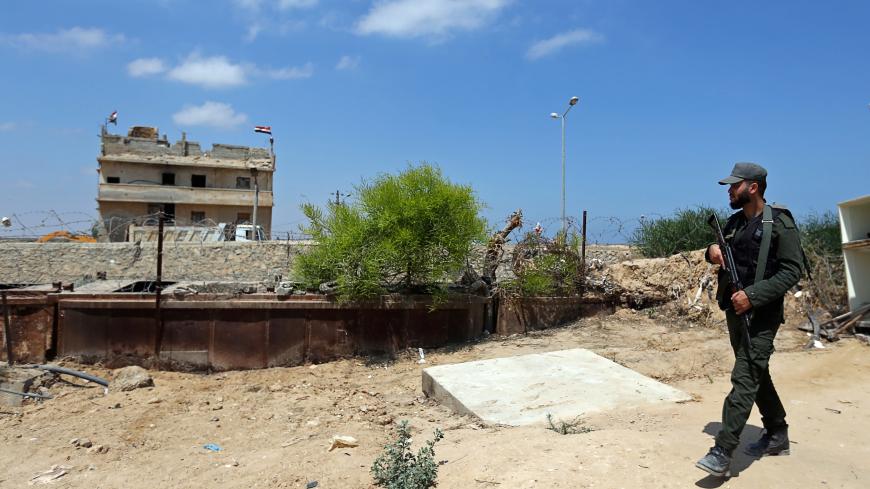 Writer Orit Patkin’s 10th romance novel “Loving Stella,” which came out in March 2019, received an unexpected promotional boost when its cover was appended to a bouquet of booby-trapped balloons launched from Gaza on June 28. The package landed near the Negev Desert kibbutz of Tze’elim, just hours after Hamas and Israel reportedly reached a new Egyptian-mediated truce deal. An Israeli source confirmed the report that same morning, saying Israel would respond to a cessation of violence by expanding Gaza’s fishing zone and renewing fuel supplies to the besieged enclave. On June 30, not a single balloon was launched from Gaza.

But why did the launchers of this last balloon (so far) attach to the bouquet the cover of a recently published romance novel from Israel? Apparently, three messages are behind this act. The first message was that the Gaza Strip is exposed to all sorts of unexpected (perhaps even unauthorized) reading materials from Israel. The second message was that, like in Israel, the people of Gaza are just regular people who aspire for love and normal lives. The third message was in the bouquet itself: Balloons will continue to be launched from Gaza to Israel if Israel does not enable Gazans normal lives, as much as possible.

The current arrangement was achieved after Israel threatened Hamas with a harsh reaction to the ongoing “colorful balloon” attacks, which sparked over 100 fires in southern Israel last week.

Hamas leaders have been mulling two options. One is to halt offensive activity against Israel by reining in the violent protests along the Gaza fence with Israel and stopping the balloon launches (not to mention preventing rocket launches that engender immediate Israeli airstrikes on Gaza) until Israel’s current political crisis is resolved and it can turn its attention back to resolving the one with Gaza.

The other option under discussion was to intensify the popular resistance campaign — border protests and balloon launches — to exert heavy pressure on Israel so it would make good on the understandings it had already reached with Hamas.

Perhaps surprisingly, Hamas leader in Gaza Yahya Sinwar led the camp opposed to escalation and brinksmanship (no one in Hamas wants to be dragged into an all-out military confrontation with Israel). He favors restraint and believes yet another round of violence will not ease the population’s distress nor lift Israel’s siege, and would result instead in further deterioration for the leadership and Gaza residents, who will have to suffer through another bloody military campaign. Sinwar believes in keeping up the pressure on Israel through Egypt and the UN to reach firm understandings.

On the other hand, the head of the Hamas political bureau, Ismail Haniyeh, and senior political department official Rawhi Mushtaha are pushing for a limited engagement (of force) with Israel based on the assumption that “force is the only thing Israel understands.”

Against the backdrop of this argument, developments on the ground in Gaza are having a serious impact on Hamas decision-makers. The enclave’s 2 million Palestinians are exhausted by over a decade of Israeli siege. They have despaired of prospects that their leadership could break through the impasse in which they find themselves. This past March, hundreds of Palestinians demonstrated against the “cost of living” in Gaza. They burned tires and clashed with Hamas security forces, who fired at them and detained dozens of protesters, including human rights activists and journalists documenting the protests.

The protests went on for four days and were considered the largest anti-Hamas protest in Gaza, although the demonstrators were careful not to vilify the movement’s leaders. Nonetheless, Hamas leadership understood that the popular protest was directed at them and could expand from the refugee camps into the Strip’s towns.

These were not the first protests against Hamas, which usually clamps down on them with violence, including live fire at demonstrators, extensive arrests and beating of protesters in the streets and interrogation cells. In January 2017, following a power supply crisis generated by sanctions that Palestinian President Mahmoud Abbas imposed on Gaza, thousands protested against Hamas in the northern part of the Strip. A similar protest broke out at al-Bureij refugee camp in the central part of the Strip in September 2012.

Israeli defense officials believe the escalation approach advocated by the likes of Haniyeh and Mushtaha is designed to drag Gaza into a limited armed campaign with Israel and thus divert protesters' anger toward the “Zionist enemy.”

Israel’s security agencies have been debating how to deal with the continued balloon launches and violent border fence protests. One approach, tried numerous times, is to retaliate against Hamas targets with airstrikes. However, these strikes have often been answered with rockets fired from Gaza at Israeli border communities and southern Israel, which in turn spawn a short-lived burst of violence that always ends in a cease-fire and understandings with Hamas. These understandings are usually limited to a minor relaxation of Israeli restrictions, such as expanding the limits on the Gaza fishing zone. These understandings never lasted long.

Another approach, tried in the past but not seen all the way through, is to exert pressure on Hamas through the exhausted residents of the territory it controls. In other words, to impose sanctions on fuel supplies, leading to prolonged power outages. Such tactics have also resulted in military escalation in the past and attempts to divert the population’s protests toward Israel. However, Israel assumed that given the current difficult state of affairs in Gaza, Hamas would react differently, which was the case, indeed. Two days after Israel blocked fuel supplies to Gaza last week, Sinwar got the message and calm was restored through Egyptian mediation.

“This time, what has been agreed on between Israel and Hamas — call it understandings or an agreement — is different,” an Israeli security official told Al-Monitor on the condition of anonymity. Israel, added the source, has maneuvered the campaign away from the border into the center of the enclave, meaning Hamas realized that unless it stops the wave of violence it instigated, such as the violent border clashes and explosive balloons, Israel would shut down the passages into Gaza and the supply of fuel and raw material would dry up. “And then, let’s see them [Hamas] deal with the protests in the Strip,” the official summed up.