Gaza hospitals on brink of collapse

Hamas sent another incendiary balloon toward Israel this week, though the Gaza Strip could under no circumstances take another confrontation with the Israel Defense Forces. 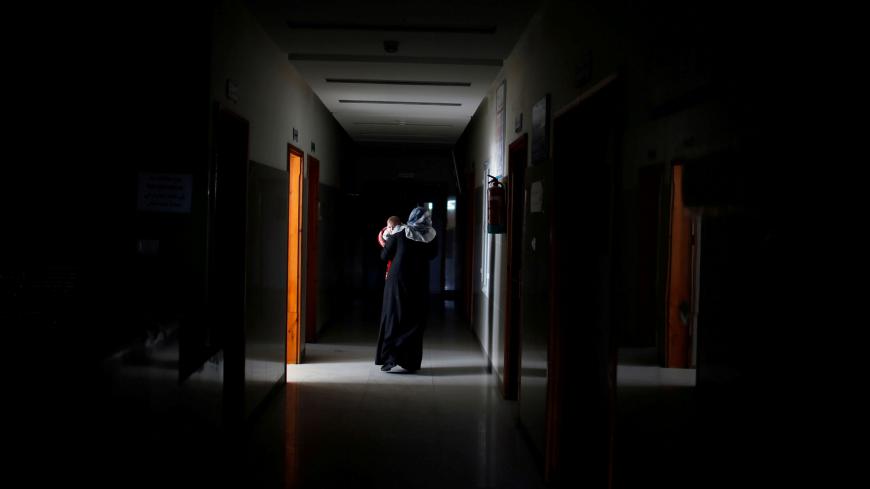 A Palestinian woman carries her sick child as she walks through the corridor at Durra hospital in Gaza City, Gaza, Feb. 6, 2018. - REUTERS/Mohammed Salem

This past Tuesday, for the first time in three months, an incendiary balloon was sent from the Gaza Strip to Israeli territory, where it caused two fires in the Kissufim Forest. For Israel, this incident was additional proof that Hamas has decided to stop playing by the rules and has given the green light to its operatives to renew the launching of incendiary balloons. This is despite the fact that Hamas agreed last November to stop the incendiary-balloon campaign and limit the number of protesters participating in violent demonstrations every week along the length of the Gaza-Israel border — in exchange for numerous easements of the closure and Israeli consent for the transfer of Qatari monetary aid to the Strip.

These understandings were supposed to be the first stage of a wider arrangement, but as many people anticipated, the first stage is, as of now, the last stage. Israel began its election campaign, Hamas revealed that it has no one to talk to, and no arrangement will be realized in the near future, if at all.

As far as Hamas leaders are concerned, if Israel does not meet its commitments, they too are not beholden to the understandings. Their goal is to focus international attention on the hardships of Gaza and its residents. Israel’s defense system updated its periodic situation-evaluation this month: Now it seems that Hamas is gearing up for an all-out confrontation with Israel in order to cause international intervention in the Strip, no matter the price. (This was mentioned in a previous Al-Monitor article.)

The incendiary balloon launched from the Gaza Strip this week is Hamas’ way of telling Israel that it has a stockpile of many more balloons waiting for to be launched into Israel. As strange as it sounds, these Gaza balloons have emerged as efficient weapons with capacity for creating tremendous damage, even against an advanced army like the Israel Defense Forces, which has the most sophisticated weapons in the world. The Gaza-envelope farmers can testify to this, as they lost dozens if not hundreds of millions of shekels this past summer alone.

This week, Hamas expressly instructed its balloon unit (the unit charged with balloon supply, appropriate kindling material and fire protective gear) to move to friction spots on the border and prepare to renew the struggle. For the upcoming fence demonstration on Feb. 22, Hamas may well allow the demonstrators to approach the fence and ignore the buffer zone that Israel created; in other words, to escalate the conflict. This would be the Hamas message to the Israelis that "enough is enough."

It is clear to the IDF that the first balloon launched this week will not be the last. We may be facing a new battle plan and do not know where it will end and how much Hamas will be willing to sacrifice for it. The word “sacrifice” is very apt when discussing Gaza and armed battle. Ultimately, the rounds of fighting till now between Gaza and Israel have been measured according to the number of killed or injured Palestinians, and the numerical breakdown of civilians versus Hamas fighters (and fighters from other organizations as well).

Al-Monitor received information that even though Yahya Sinwar, the Hamas leader in Gaza, decided to increase the pressure on Israel, not everyone in the movement’s leadership is happy with that decision. Some members of the Hamas leadership, those viewed as part of the movement’s pragmatic camp, feel that a confrontation with Israel now may be catastrophic, and not because of any military weakness on the part of Hamas’ Izz ad-Din al-Qassam Brigades. Since 2008, Israel has launched three military campaigns in Gaza (Operation Protective Edge in 2014, Operation Pillar of Defense in 2012 and Operation Cast Lead in 2008). From that period on, there have been innumerable military activities in between that ended in temporary cease-fires, and border fence demonstrations that exacted many victims. Despite all this, Hamas received strong public support in its armed struggle against Israel.

But something changed over the last year. After hundreds of Palestinians lost their lives along the fence, thousands more were injured, and a harsh reality of tremendous shortages in basic staples and food — it appears that the Palestinian population in Gaza is exhausted. They may not be able to endure another bloody round of fighting. And that’s not all; there are other issues as well, in addition to the general morale.

A Hamas source who spoke to Al-Monitor said that the situation in the Gaza hospitals are so grievous that they can barely absorb the Palestinians injured in the border demonstrations. And what if there’s a war that inflicts injuries on a large number of people? Who will take care of them? And how can they be treated when there is such a huge shortage of medical equipment and medicines? “You don’t wage wars without hospitals,” he said and emphasized that under current conditions, the Gaza hospitals are unable to treat even those patients who are not connected to the armed conflict with Israel.

Two main reasons are behind the severe shortage of medical equipment and medicines in Gaza: The first is that the Gaza hospitals treated many thousands of Palestinians injured in fence demonstrations this past year, and the medical inventories were not replenished; the second is that the sanctions imposed by Palestinian President Mahmoud Abbas on the Strip have severely harmed Gaza’s health system (the system was financed for the most part from the Palestinian Authority budget). According to our source, the PA did not stop all the funding of Gaza hospitals but did cut the funding to Gaza’s health system by more than half.

The situation described above is likely to deteriorate even further. On Feb. 17, Israel’s Security Cabinet decided to implement a law that allows Israel to deduct from the tax money it collects on behalf of the PA the funds that it pays to the families of suicide bombers and Palestinian prisoners in Israel. In response, President Abbas announced that he will refuse to accept the money (about half a billion shekels a month, or $138 million), if Israel deducts even one shekel from it. The first ones who are likely to suffer the most from this game are the Gaza residents, including the failing health system in the Strip.

The pressure of the pragmatic Hamas wing leader Sinwar has had only mixed results. Sinwar heard the voices and promised to act responsibly and act against Israel “to a measured degree,” but he could not commit himself to what would happen should the conflict get out of hand.

The situation of the Gaza hospitals was discussed in the Security Cabinet on Feb. 5. The IDF warned the Cabinet ministers that the health services in Gaza are on the brink of collapse, and if a military campaign breaks out it will be hard for Israel to receive international support. Clearly, the sight of injured and dying people abandoned on Gaza sidewalks in front of collapsing hospitals will fill the leading news channels throughout the world and prevent Israel from conducting a military campaign against Hamas.

The Cabinet heard all this, but did not internalize it. Israel’s ministers continue to make decisions that seem to be based on only one consideration: political gain in Israel’s current election campaign.