The charisma of Prime Minister Benjamin Netanyahu and his discourse about persecution by the country's elites encourage Likud supporters to identify with him. 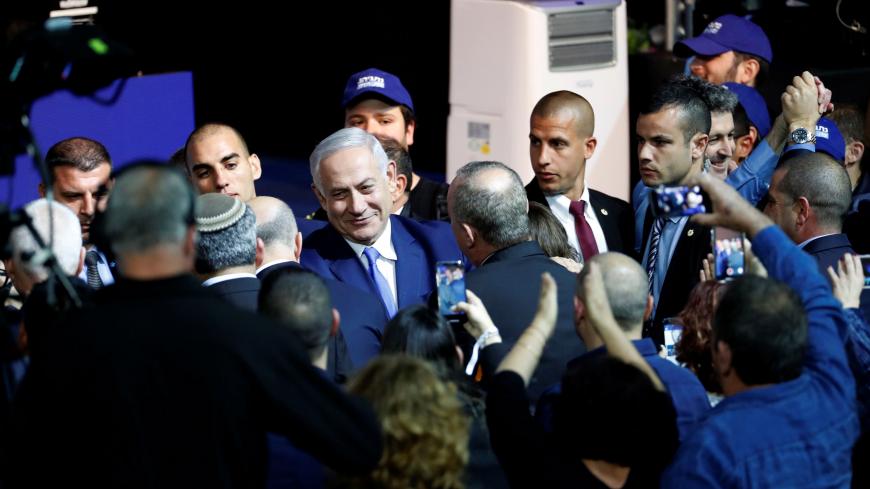 Israeli Prime Minister Benjamin Netanyahu is greeted by supporters of his Likud party as he arrives to speak following the announcement of exit polls in Israel's parliamentary election, at the party headquarters in Tel Aviv, Israel, April 10, 2019. - REUTERS/Ronen Zvulun

About two weeks before the last election, on the evening of March 23, Prime Minister Benjamin Netanyahu arrived for an urgent interview with Channel 12 news following a long period when he had refused to talk with the Israeli media. Earlier in the same weekend, the Likud’s internal polls showed that the submarine affair and the Blue and White party’s campaigning on his alleged corruption managed to seep into Likud voters as well. Until that point this base was stable in its support for Netanyahu, but Blue and White’s campaign had successfully linked his alleged personal corruption and the issues of state security.

Netanyahu, who conducted the Likud’s campaign by himself, concluded that he must embark on quick media action in order to stop the electoral spillover. Of course, he could have chosen a right-wing media channel, or as he often does, broadcast on Facebook Live, but he wanted to go where he would be attacked with hard questions with no mercy and no dispensations — and he knew why.

The interview with journalist Keren Marciano of Channel 12 turned into one of the election campaign’s most critical events. Marciano did excellent journalistic work by confronting Netanyahu with the suspicions against him on the various criminal charges, and as she made it harder for him, raised her tone and didn’t let go, Likud members’ WhatsApp groups burned in anger and identified with their leader. They felt he was wronged, that he was being treated with disrespect and that his diplomatic and economic accomplishments were being ignored. They felt they themselves were being attacked.

Anyone who experienced the internal Likud talk that evening would have noticed the gathering around Netanyahu and the sense of identification with him as a victim of media and police persecution. Netanyahu addressed the Likud public, its very underbelly, in that interview. He spoke of persecution aimed at taking down the right-wing government and it worked like magic. The next day there was no mention of the submarine affair among the Likud groups.

As if in a mirror on Twitter, the wrestling arena of the media guild, as well as among his rivals in the center-left, there was a naive sense that Netanyahu got knocked out in that interview, that he was defeated in the medium he so controlled, that he seemed stressed, vulnerable and defensive; that he is apparently facing a glorious defeat.

“That’s what is not understood about the Likud,” said Itzik Ashkenazi, a former adviser to ministers in the party and a second-generation Likud voter. “All the personal attacks on Netanyahu only strengthen his base and set off a strong urge to rise up and unite around him. It’s the Likud code,” he told Al-Monitor.

The relationship between Netanyahu and the Likud goes back three decades. Part of the deep connection is based on a common sense of persecution and discrimination. Although Netanyahu’s life stations passed through all the elite places — a father who was a history professor, a childhood in a prestigious Jerusalem neighborhood, army service in an elite combat unit and studies at MIT and Harvard University — he carries with him the feelings of discrimination of his Revisionist father, who believed that the academic elite pushed him aside and prevented his advancement because of his right-wing views. Like his father, Netanyahu, too, claims political persecution and accuses the criminal investigations of being fueled by the left in order to take down the right-wing government.

These are authentic feelings of Netanyahu, that large parts of the Likud identify with most of all the Mizrahim (of Middle Eastern origins) who live in the periphery of the country, who had suffered neglect and discrimination from the Mapai government in the first decades of the state. This group believes that the long Likud rule has made it connected, improved its economic situation and gave it social mobility. But not only that, they see Netanyahu as successful in keeping the government in the hands of the Likud, successful in bringing victory time after time, and this is hard to dispute.

Eli Vered Hazan, who directs the foreign affairs department of the Likud and a second-generation Likud voter, grew up in the periphery town of Bet Shemesh. His father came from Iraq and his mother from Tunisia. In a conversation with Al-Monitor, he explained that support for Netanyahu doesn’t stem from blind voting for the party line. “It’s exactly the opposite,” he said. “The Likud is the classic people’s party, it has some of everything. Poor and rich, academics, Mizrahim, the periphery and Tel Aviv — it’s not a herd. These are intelligent voters. Netanyahu opened us to the world. This is what my father says, who grew up in the poverty of second Israel, who was discriminated against. Now he says that he feels he belongs to a new elite. Economically he turned from a poor person to a wealthy person. He believes this is due to the opening of the Israeli market and the privatization that happened during Netanyahu’s era.”

He added, “I’m a rational person; when I look at the options Netanyahu is the best. The quality of life compared to what I had 20 years ago is much better as well as my personal security. I admire that he didn’t go into the Gaza Strip, although it could have served him with the right-wing base. This is leadership in my view.”

The conversation with Vered Hazan took place on a day when Time Magazine featured Netanyahu on its cover, on July 11, with the headline “The Strong Survive.” The article referred to, “How Israel's Benjamin Netanyahu is testing the limits of power.” Netanyahu of course used the prestigious cover on social media; it’s the kind of thing that sharpens the sense of pride among his supporters, and Netanyahu is the first to identify the potential.

Next week, Netanyahu will make history, bypassing Israel’s first Prime Minister David Ben-Gurion as the longest-ruling head of state in the annals of the state. Of course, the Likud is very proud of that, but there is more.

Outside of the Likud, too, there are large groups that support Netanyahu as prime minister, even though they do not vote for him: the ultra-Orthodox, the extreme right wing and Russian Avigdor Liberman voters — what’s usually termed “the alliance of the discriminated.” Netanyahu functions like a brand among these groups — they see him as a strong leader with excellent diplomatic skills.

Vered Hazan travels the world and represents the Likud at conferences and delegations. He encounters admiration for Netanyahu, noting, “I was recently in Albania, and when the Albanian president heard that I’m from Netanyahu’s party he was so excited and said on stage that Netanyahu is a once-in-a-generation leader. There’s a gap between the image of Netanyahu around the world and the left’s hatred of him.”