Netanyahu king of 'the second Israel'

For Israel’s poor, for the deprived and those outside of the elite circles, Prime Minister Benjamin Netanyahu is an authentic leader fighting their fight. 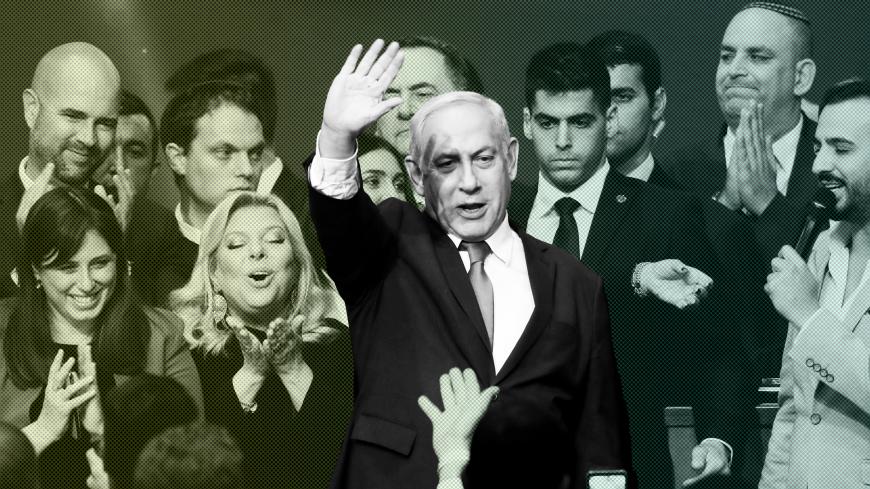 Israeli Prime Minister Benjamin Netanyahu stands next to his wife, Sara, as he waves to supporters following the announcement of exit polls in Israel's election at his Likud party headquarters, Tel Aviv, Israel, March 3, 2020. - REUTERS/Amir Cohen

“I remember our first victory in 1996 was historic, but this time is even sweeter because it is a victory against all odds,” said Prime Minister Benjamin Netanyahu March 2 after the release of the television exit polls. It was no coincidence that Netanyahu decided to begin his election night speech by comparing what had just happened to his 1996 victory after Yitzhak Rabin’s assassination. By doing this, he encompassed the entire story of the 2020 election. While Netanyahu failed to win 61 seats and a decisive victory, he could take credit for an enormous achievement. He succeeded in restoring the Likud’s status as the largest party in the Knesset, and he strengthened his right-wing, ultra-Orthodox bloc, which emerged from the election with three more seats than it won in September 2019.

It is still too early to know what the next few days will bring and whether a fourth round of elections is a real option. What is certain, however, is that the alliance between the victims of discrimination, which brought a 46-year-old Netanyahu to power in May 1996, is the same alliance, with a few tweaks, which is helping him keep the Prime Minister’s Office for the foreseeable future, even if it is just days before the start of his trial for bribery, fraud and the violation of trust, scheduled for March 17.

Thanks to the support he received from the ultra-Orthodox, Mizrahim (of Middle Eastern origin), Ethiopian immigrants, periphery towns and the middle class, Netanyahu will not be evacuating his residence on Balfour Street in the foreseeable future. All it takes is a quick scan of the voter breakdown to see that the Likud’s major centers of support are, once again, the towns and villages in the country’s north and south — the poorer, periphery towns. They even include towns like Sderot that are being battered by rockets from Gaza. Netanyahu got stronger in all of these places, helped along by his campaign message that he is being persecuted by the left, the police and the media. Of course, this campaign reached new heights as his legal proceedings got even more tangled.

Netanyahu did it with a “revivalist” campaign of sorts that he carried the length and breadth of the country. In the last few days alone, he actually contacted people personally through phone calls and even knocking on doors. In contrast, the Blue and White party did not manage to fill the role it chose for itself from that party’s very inception. It never succeeded in becoming a warm home for disenchanted Likud supporters. In this election, it actually got weaker in the traditional Likud bastions. Instead, it earned the reputation of being a draw for established, wealthy Ashkenazi voters with left-wing leanings who live in the influential big cities. There were, of course, many Mizrahi Jews who voted Blue and White and Ashkenazim who voted Likud. But what it really means is that Likud, ultra-Orthodox, and Yamina voters all share that same sense of exclusion, which helps to shape their political identity.

That is why a comparison with 1996 is so instructive, even from the perspective of Netanyahu’s experience. “We stood up against enormous forces. They already delivered our eulogy. Our rivals said the Netanyahu era is over, but together we turned it around; we made lemonade out of lemons,” quipped Netanyahu almost a quarter of a century later. He was practically moved to tears when he said it too. He was on the verge of defeat in 1996 too. Rabin's assassination shook up Israeli society and caused the Likud to crash in the polls. Netanyahu and the right at large were seen as guilty for inciting against the prime minister. Young Likud activists on the country’s campuses felt as if they were suddenly taboo. Mizrahi religious students at Bar Ilan University were despondent. After all, that was where the assassin Yigal Amir, son of a religious family of Yemenite immigrants, went to school. Hundreds of thousands of immigrants from Russia, many of whom opposed the Oslo Accords, revolted against what they interpreted as an attempt by the left-wing elites to keep them from thinking independently in a democratic country after they uprooted themselves to live here. The ultra-Orthodox and settlers felt like they were in the same boat.

And then there was Netanyahu himself. He felt persecuted by the media, the elites and the left. He believed that as leader of the right, he was the victim of a cruel and effective delegitimization campaign. Netanyahu was quick to realize that he was not alone in this campaign and that the collective feeling of victimhood has the potential to turn into overwhelming political vitality. It could be what would rally the camp around him again. It did, in fact, turn everything upside down.

When Israel went to the polls in 1996, it was the first time that the country voted separately for prime minister. Netanyahu won the coveted prize by a single percentage point. It took just 29,457 votes to decide the election in Netanyahu’s favor and change the country’s political history, despite all the assessments, despite all the odds. Back then, Netanyahu also traversed the country, going from city to city and neighborhood to neighborhood, evoking the same feeling of victimhood. He gave it shape, identity and a clear goal: saving Israel from the Oslo Accords and the left. In the current election, it was his personal and legal fate, which he managed to link intrinsically with the fate of over 2 million voters.

On the night of the current election, Netanyahu hoped that it would be the smaller numbers —little groups and individual voters — that would give a total (i.e., “decisive”) victory, just as they did in 1996. It is now clear that this is not what happened. The future still portends an intense political and social battle over the next few weeks.

Once again, the media is now focused on the question of who are those people who follow Netanyahu so fervently, who tattoo his face on their arms and sing a hoarse rendition of “Bibi, King of Israel.” Once again, the question is being raised: How did he, the wealthy white son of a professor, who hobnobs with billionaires and is entangled in all sorts of corruption charges, manage to make a home for himself in the hearts of the “second Israel”? The subtext hints at a blind, herd mentality.

What this perspective fails to see is the very heart of this connection, which is so authentic and powerful and which will persist even after the Netanyahu era is over. It will certainly be there during his trial. Netanyahu is the unchallenged leader of those groups in Israeli society whose identity is rooted, at least in part, in discrimination. This is true even if those people feeling victimhood have since become rich and now live in spacious homes. It is no wonder that the civil society moves being taken against Netanyahu because of his indictments are being led by the old elites, pilots, officers in top commando units, jurists and the high-tech sector — in other words, the throbbing, vibrant heart of the first Israel. They write resounding letters to the president and members of the Knesset alike, warning that the end of the state is right around the corner. And yet, without even noticing it, they have appropriated the state for themselves by determining that they know what is better for it than Mizrahi voter Masouda from Sderot. Their problem really is that once they get to the ballot box, every vote counts the same and every choice is worthy. That is why anyone who thinks that the struggle over the country’s character will end with Netanyahu’s downfall, or alternately, with him continuing in office, is ultimately wrong. It may take another generation. Netanyahu understands this alliance of the victims of discrimination down to its most profound levels, because deep inside, Netanyahu feels that he is one of them.