Iran plans to launch a new integrated foreign exchange market to tame hard-currency volatility, though that goal is far from assured. 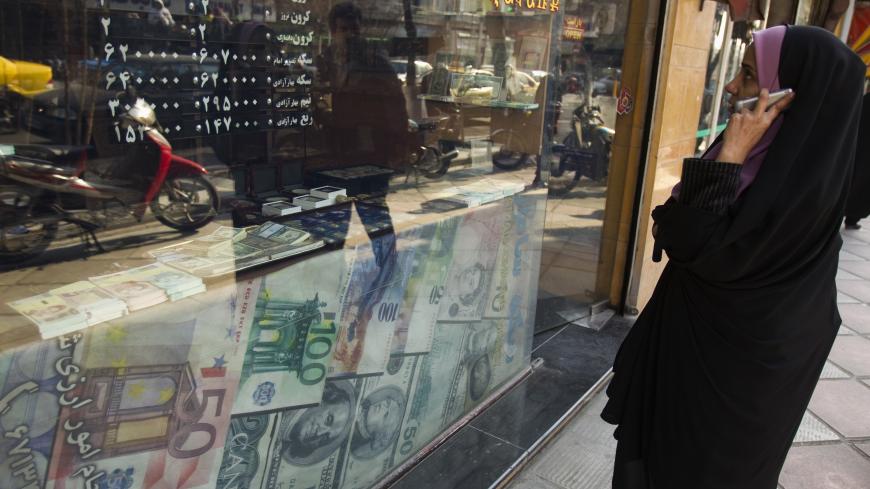 A woman looks at exchange rates by the window of a currency exchange shop in Tehran's business district, Jan. 7, 2012. - REUTERS/Raheb Homavandi

Extreme foreign exchange-market fluctuations are highly likely to continue to menace Iran’s national currency, the rial, and the Iranian economy.

A new integrated foreign exchange market is in the works to meet this challenge. NIMA, the state-run secondary foreign exchange market launched just over a year ago, hasn’t brought about the intended results for the Iranian economy due to the Central Bank of Iran’s weak regulatory oversight. Nevertheless, the CBI claims that this newly designed currency market will be more effective and marginalize middlemen, whose speculatory activities have largely contributed to the rial’s devaluation at times of economic and political crises.

The United Arab Emirates’ sanctioning of Iranian exchange houses based in Dubai led to the rising influence of other currency exchange shops, such as Sulaymaniyah in Iraq and those in Herat, Afghanistan, on the Iranian foreign exchange (forex) market in the preceding year. And their capacity to affect daily dollar price discovery in the Iranian currency market has complicated forex market management inside the country for regulators. By launching this new market, the CBI believes it will ultimately overcome this dilemma and set the reference point to determine the daily price of the dollar and other currencies.

The Money and Credit Council, the CBI’s highest policy-making body, ratified the new currency market’s bylaws Jan. 8. This so-called organized market is set to regulate retail and wholesale hard-currency trades, particularly those made in cash. Key stakeholders in the market will include the Iran Fara Bourse (the country’s stock exchange), the Association of Private Banks and Credit Institutions, the Association of Bureaux de Change Operators of Iran and representatives of public banks. But this new initiative doesn’t look as promising as the CBI pledges it will be.

Regulatory and oversight duties have been unilaterally bestowed on the CBI and the government. The private sector, including chambers of commerce, the Iran Export Confederation, the Iran Import Federation and other major players have been excluded from the market’s leadership.

The money exchange houses are limited to trading quantities designated by CBI, meaning the currency market can’t meet all the demand. This measure makes currency exchange houses into mere brokers. This initiative might ease the government's concerns about selling currency to those who are not licensed by the CBI, but it provides no way to eliminate street money-changers as promised. A worrying number of them will be still able to buy and sell foreign currencies via brokers, despite the CBI’s claim of fighting speculation.

Viewed from another angle, the current currency exchange market in Iran more or less resembles that of the over-the-counter market. Compared with conventional regulated markets, it is less organized and less formal. Interestingly, the newly designed currency market is akin to the organized stock market, as all actors and their transactions can be identified and it is easy to set market limits on trades and ensure post-trade processing and settlement mechanisms. Therefore, the advantages attributed to an exchange market are relevant to this new market as well.

But all these benefits will be undermined by technical and regulatory shortcomings should this market be expected to handle other challenging processes, such as handling hawala, or informal money transfers. In the case of the hawala market, the clearinghouse — an underlying pillar of the stock market, charged with facilitating trade between buyers and sellers — won’t be able to guarantee fund exchanges between banks and brokers, as these transactions are subject to the international monetary system’s rules and regulations. Banks engaged in such transactions are obliged to follow international laws rather than those of the clearinghouse governed by domestic decrees. Additionally, completing settlements will take more time and involve a bureaucracy, factors that are antithetical to the notion of liquidity.

In terms of factors such as price discovery, liquidity and trading costs, over-the-counter markets are positioned to be as efficient as organized markets. Consequently, initiating this new market in the presence of a similar market already performing well against changes in supply and demand is rather illogical.

Given the current political and economic conditions of the country, there is a million-dollar question that policy-makers need to answer: If forex rates happen to rise rather than drop, what kind of action will the CBI be willing to take? Common sense suggests that it must sell foreign banknotes to the highest bidder. But should it do otherwise, this market should be terminated.

This new market requires a big change in traditional viewpoints among Iranian authorities and calls for them to abandon certain ineffective practices. Due to the currency devaluation, consumer goods prices have seen a significant rise compared with the preceding year according to figures recently posted by Statistical Center of Iran. The general price level of goods and services rose by 50.4% compared to the same month last year. During this period, the CBI has provided importers of essential products with cheap US dollars at the fixed official exchange rate of 42,000 rials while the dollar more than doubled. The experiment indicated insisting on a fixed dollar rate does nothing but wastes the CBI’s meager currency reserves while feeding inflation and distrust of the system.

As such, the success of this market hangs on the idea that the High Council for Economic Coordination must act unanimously and create a suitable atmosphere for a new forex market. This council is composed of leaders from the government's executive, legislative and judiciary branches. Unless the conditions for a healthy and politically free trading environment are met, this new currency market is destined to die in infancy.