Iran officially announced it has taken its second step in reducing nuclear commitments and warned that unless the others fulfill their side of the nuclear deal, Iran would take the third step as well. 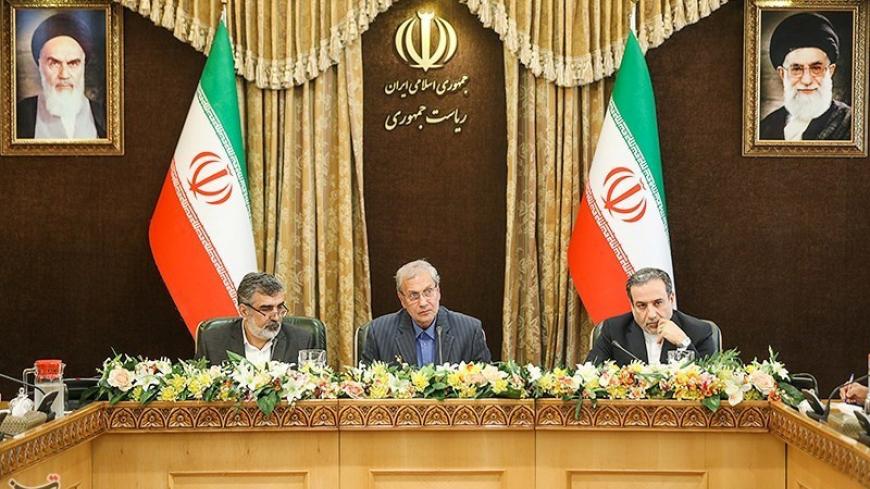 In response to the United States' withdrawal from the 2015 nuclear deal, officially known as the Joint Comprehensive Plan of Action (JCPOA), Iran announced it has taken what it calls its “second step” away from the accord.

Behrouz Kamalvandi, spokesman for Iran’s Atomic Energy Organization, told reporters July 8, “We waited two months, and Iran’s second countermeasures started yesterday.” Kamalvandi added, “Of course this was after waiting for one year, during which the opposing side should have fulfilled its commitments. But suitable steps were not taken. Therefore, based on the decision by the president and Supreme National Security Council (SNSC), the order was given to take the second step and increase enrichment beyond 3.67%.”

Since the May 2018 US withdrawal from the JCPOA and the reimposition of sanctions on countries that continue to purchase oil from Iran, the Islamic Republic has put the onus on European countries to keep the 2015 nuclear deal alive. In January 2019, Germany, the United Kingdom and France announced the formation of INSTEX (Instrument in Support of Trade Exchange), which was supposed to facilitate trade between Europe and Iran. However, according to Iran, the transactions have been too small in volume and have not provided Iran a safe avenue to conduct financial transactions for the sale of their oil.

Iran’s “first step” was the announcement that it had exceeded the 300 kilograms of stockpile of low-enriched uranium, a limit that was stipulated in the JCPOA. The increase in enrichment to 4.5% exceeds the 3.67% limit set in the JCPOA. Iran’s strategy will be to gradually reduce nuclear commitments under the JCPOA until Europe is able to protect itself from US sanctions.

Kamalvandi said, “We will not allow the balance to be one-sided and for us to have commitments and not have any benefits. Our rights need to be returned to the previous level and there [must] be a balance; [if not], we will gradually reduce our commitments.” He added, “Our steps are able to be suspended, and the possibility exists that if the opposing side fulfills its commitments we could return to previous levels.”

Kamalvandi also discussed the “third step” Iran would take if Europe is not able to deliver on its side of the nuclear deal. He said the step would be “logical” and not done out of “spite” and done according to the country’s needs. Installing the IR2 and IR2M centrifuges are possibilities he discussed for the third step. When asked if Iran would consider enriching up to 20% he said, “Right now it is not one of our needs.” When asked if 20% enrichment had been discussed at SNSC meetings, he said, “Yes, 20% enrichment and options higher than that have been discussed.”

Foreign Ministry Spokesman Abbas Mousavi also discussed the “third step,” saying that it would be “firmer.” On the possibility of talks involving the United States, Mousavi said, “The door for diplomacy is open to everyone.” He added, “For America, it’s up to them and their own behavior. We will not roll out the red carpet for them. But if they fulfill their commitments, we can take that as a positive step.”