Tehran courts Kurds as Washington amps up rhetoric against Iran

Iranian Kurdish opposition groups and Iran are conducting talks in Oslo, in what some see as an Iranian bid to safeguard against Kurdish collaboration with the United States. 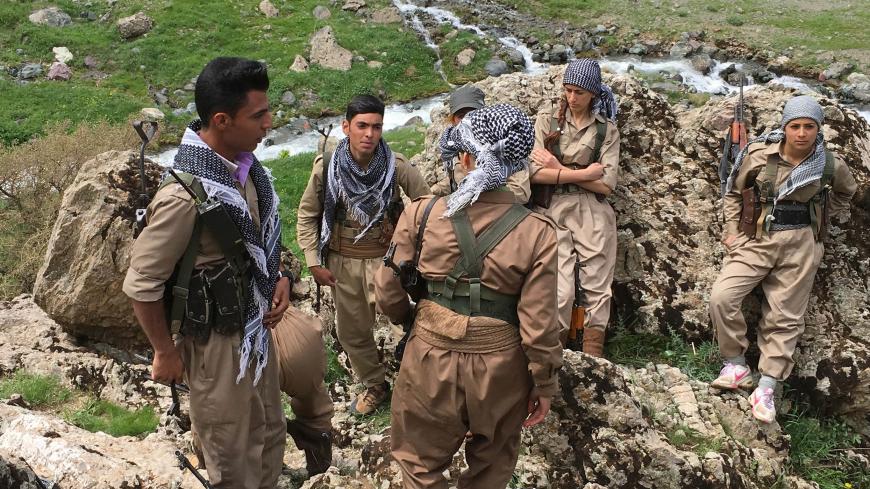 The Democratic Party of Iranian Kurdistan's (PDKI) armed wing, known as the Iranian peshmerga, train near the Iran-Iraq border, May 13, 2017. - Gail Orenstein/NurPhoto via Getty Images

Iranian Kurdish opposition groups will meet with Iranian government officials in Oslo for a third round of talks in August, Al-Monitor has learned. The meetings, to be mediated by a Norwegian organization devoted to conflict resolution, mark the first time the Iranian regime has sat at the same table with multiple Kurdish groups since the 1979 Islamic Revolution,  and the first time that it has met with any Kurdish party in the presence of foreign facilitators.

"The talks should not be confused with negotiations,” said an official from one of four Iranian Kurdish opposition parties participating in the meetings, which are being brokered by the Norwegian Center for Conflict Resolution, known as NOREF. “The process is a continuation of seeking to lay a foundation, a framework for substantive negotiations, more of a sizing up of mutual intentions to gauge whether they are sincere. I don’t believe for a second that the Iranian regime is sincere.” The official echoed sentiments aired by other Iranian Kurdish opposition sources, who all spoke on condition of anonymity due to the delicate nature of the subject.

The prevailing consensus among the Iranian Kurdish groups is that Tehran's cooperation with NOREF is aimed at dissuading the armed Iranian Kurdish opposition from collaborating with the United States, should the latter take military action against Iran.

“Their aim is to thwart any cooperation between us and the United States,” the Kurdish opposition member said. “We agreed to take part because we want to show good will, to prove that we want a political solution to the Kurdish problem, so we don’t end up getting labeled the bad guys.”

All of the Iranian Kurdish sources who spoke to Al-Monitor denied that US officials had contacted them to discuss collaboration against the Iranian regime.

“The Kurds have been at the forefront of opposition to the Iranian regime. They are the only ones that the regime truly fears,” Barzoo Eliassi, an associate professor at Sweden’s Linnaeus University, told Al-Monitor. As US sanctions squeeze Iran economically, the regime “is losing its legitimacy. And when it feels weak, it turns to the Kurdish parties. If it really wanted to solve the Kurdish problem, it would go ahead and give the Kurdish people their rights without having to engage with the parties at all. It doesn’t.”

Jonathan Spyer, director of the Middle East Center for Reporting and Analysis, an Israeli think tank, told Al-Monitor, “The Iranian authorities appear to be genuinely concerned at the possibility of the use by the United States of indigenous Iranian paramilitary groups in a proxy war against them. This would explain the marked uptick in actions against such groups in the last year.”

Spyer added, “The irony is that there is little evidence for any meaningful support afforded by the United States to these groups.”

One of the Iranian Kurdish officials participating in the Oslo talks concurred. “The regime reaches out to the Kurds when it's under threat or vulnerable, as it did immediately after the revolution, at the end of the war with Iraq in 1989 and following the American occupation of Iraq in 2003. There’s a pattern,” he said.

Absent from the deliberations is the one armed group that arguably wields the most heft: the Kurdistan Free Life Party (PJAK). Other Iranian Kurdish parties reject PJAK as "outsiders" because of the group's close links to the Kurdistan Workers Party (PKK), a Kurdish militia founded by Turkish Kurds that fights the Turkish army. They also accuse PJAK of acting with Tehran, a claim the group rejects. "PJAK's exclusion by other Kurdish parties mirrors the very same divisions that the Iranian regime itself seeks to sow," Eliassi said.

The Oslo meetings were meant to be secret. They first took place at a hotel in the Norwegian capital in May, and then again in late June, with the presence of all four parties of the Cooperation Center of Iranian Kurdistan’s Political Parties, a body launched in early 2018 to overcome chronic internecine feuds. Two of the parties were rival factions of the Kurdistan Democratic Party (KDP), while the remaining two were rival iterations of the left wing Komala, which is split in three. The communist version did not take part.

But as leaks surfaced in social media, the body confirmed in a July 13 statement infused with caveats that contacts with the regime had occurred. “We are in touch with some international centers and partners to find a peaceful solution to the Kurdish question," the brief statement read. "Whenever the terms of serious negotiations for resolving the Kurdish question in Eastern Kurdistan are set, we will for certain inform the Kurdish public about this.”

The Kurds likely did the leaking — for insurance. “We have a bitter experience of how things turn out when such meetings are kept secret,” said an Iranian Kurdish party official. “We get killed.”

He was alluding to the murder of legendary Iranian Kurdish politician Abdul Rahman Ghassemlou in Vienna in 1989. Iranian operatives killed Ghassemlou in the same room where he had been secretly negotiating with Iranian officials. Sadegh Sharafkandi succeeded Ghassemlou as secretary-general of the Kurdistan Democratic Party of Iran, only to be gunned down in a Berlin restaurant in 1992.

Eliassi said, “The Ghassemlou murder is indelibly etched into the Kurdish psyche.”

A Kurdish official who traveled to Oslo said, “The Norwegian security services were responsible for our protection, checking out the hotel and making sure that no mischief could occur.”

Yet, even as the parties prepared for their third encounter, Iran’s elite Islamic Revolutionary Guard Corps targeted Iranian Kurdish opposition outposts. The Revolutionary Guards fired Katyusha rockets and launched armed drones at the Kurdish bases in the mountainous Sidekhan region, which separates Iraq from Iran, on July 10 and 11, wounding three peshmerga fighters. One died yesterday, an Iranian Kurdish official told Al-Monitor. They belonged to one of the Komala parties represented in Oslo

The Revolutionary Guards claimed in a statement, as quoted by Iran’s semiofficial Tasnim News Agency, that “a large number of terrorists were killed and wounded.”

They said the strikes were retaliation for recent attacks that killed at least five members of the elite corps in western Iran. Among those killed were Col. Hassel Ahmedi, an ethnic Kurd who was killed in Piranshahr July 9. Ahmedi was reviled by local Kurds as a “jash,” or donkey, the term used for Kurdish collaborators with the regime. The Kurdistan Democratic Party, an offshoot of the Kurdistan Democratic Party of Iran, which was blamed for the attacks, denied responsibility. It is also participating in the Oslo talks.

“The odd thing,” said Spyer, is that none of the armed Iranian Kurdish groups “are engaged in a full insurgency against the regime, because [they] are aware of their own limited capacity.” Another factor is that the Iraqi Kurdistan Regional Government, which hosts them, “has no desire to see its territory used for such a campaign.”