On his first day on the job at the Pentagon, US Secretary of Defense Mark Esper said that a fresh European-led initiative to defend ships transiting the Gulf was complementary to the Donald Trump administration’s separate efforts to gather allies to protect shipping in the region. 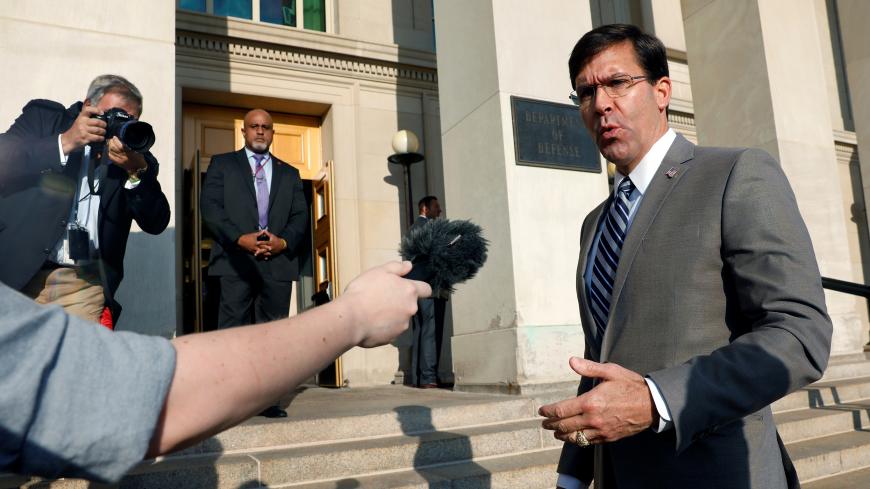 Mark Esper talks to reporters as he arrives for the first day on job as New US Secretary of Defense at the Pentagon in Arlington, Virginia, US, July 24, 2019. - REUTERS/Yuri Gripas

On his first day on the job at the Pentagon, US Secretary of Defense Mark Esper said today that a fresh European-led initiative to defend ships transiting the Gulf was complementary to the Donald Trump administration’s separate efforts to gather allies to protect shipping in the region.

Why it matters: Esper’s comments come after British Foreign Secretary Jeremy Hunt told Parliament on Tuesday that the European plan “will not be a part of the US maximum pressure policy” in the wake of US-led discussions that attempted to recruit 60 nations into Operation Sentinel, saying that London was committed to salvaging the 2015 Iran nuclear deal.

“What we’ve said all along is the key thing here is twofold; one is maintaining freedom of navigation in the strait and the Persian Gulf and the Gulf of Oman, and secondly is deterring provocative actions from Iran,” Esper told reporters. “Whether we do that as one big group or subgroups, as long as it complements one another, there will clearly be coordination between us all.”

All for one or one for all? But with the emergence of the European plan, which has already won support from the British and German governments, Esper would not commit to defending the vessels of US allies in the region. “There’s no policy that I’m aware of,” the former Army secretary said. “We’d come to the aid of our allies depending on the situation.”

The British, he said, are “trying to escort their ships … and I assume that other countries will escort their ships.” Esper said the plan doesn’t “necessarily mean that every US-flagged ship going through the strait has a destroyer right behind it” but said the military could keep ships nearby or use overhead surveillance to stop attacks.

What’s next: Esper said he planned to head to US Central Command headquarters in Florida next week to clarify Pentagon planning on escorting vessels through the region.