Addressing issues of patriarchy, immigration and religious power, beloved writer Kahlil Gibran’s century-old novel 'Broken Wings' and a musical based on it are powerfully relevant today. 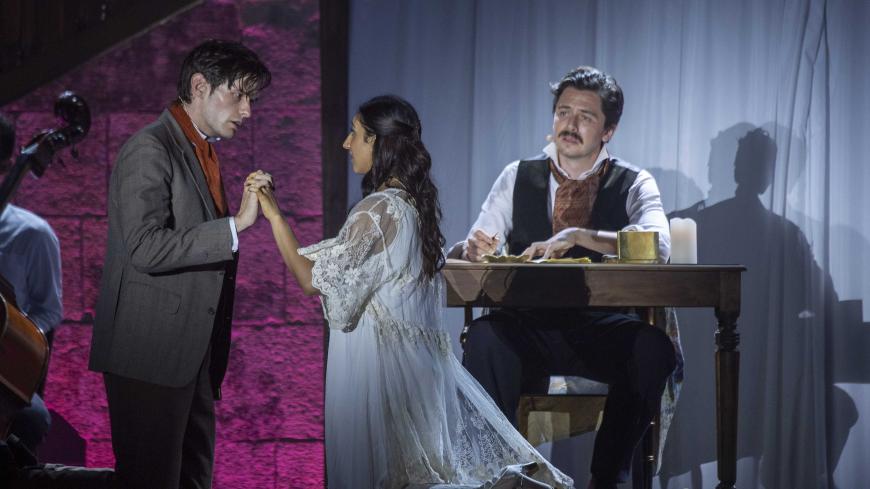 BEIRUT — Speaking about the new musical about the life of legendary Lebanese writer Khalil Gibran, Lebanese-British playwright Nadim Naaman told Al-Monitor, “Lebanon is extremely proud of him and extremely vocal about how he is one of their own. But what they aren’t so good at is looking at him in a new light.”

In the musical he co-wrote, "Broken Wings," Naaman wanted to show Middle Eastern audiences "this guy who was critiquing them massively 100 years ago.”

The musical, adapted from Gibran’s novella of the same name, made its international debut at the Beiteddine Art Festival July 24-26.

The poet, artist, writer and philosopher's work preached love, challenged power and explored humanist themes at the turn of the century. Gibran is currently the third highest-selling poet of all time and a Lebanese national icon.

Naaman, who grew up in England, was well aware of the unique place Gibran held in Lebanese culture. “Even in London, Gibran was always recited at weddings and funerals. … 'The Prophet' has been quoted at almost all our family events and his ornate pictures are all around my parent’s house.”

Born in 1883 into poverty in the northern Lebanese town of Bsharri, Gibran’s father was imprisoned under Ottoman rule when the poet was still a child. His mother led the rest of the family to Boston, joining the tens of thousands of immigrants from the region moving to the United States at the time.

Naaman had always wanted to write a biopic on this integral figure, but found it a challenge to condense the life of the well-traveled and multifaceted artist into a single performance. Reading Gibran’s poetic novella "Broken Wings," it occurred to him that this autobiographical work could be turned into a musical. “He talks about music of the soul and singing. ... The structure of the book is almost written like a play, each chapter is a new time, a new location, as if it was meant to be adapted to the stage.”

Published in 1912, the "Broken Wings" follows an 18-year-old Gibran traveling from America to his home country of Lebanon to reconnect with his roots and study Arabic and French.

Arriving in the tight-knit social circles of Beirut — a radical change from liberal America where Gibran lived — he meets the daughter of his father’s friend, Selma Karamy, and quickly falls in love. However, an arranged marriage between Selma and the nephew of a powerful bishop pushes the lovers apart and tradition and rumors lead to a tragic end.

Joseph A. Fenianos, president of the Gibran National Committee, the organization that runs Gibran’s museum and controls the copyrights for his work, told Al-Monitor, “[Broken Wings] illuminates many of Gibran’s essential fears: the dilemmas [faced by] Eastern women, wealth as an impediment to happiness, the greed and corruption of the clergy, the devastating power of love … women’s lack of rights and the false values on which society is built.”

The current relevance of these themes are a key reason Naaman felt it necessary to make the musical. He said, “I have friends only allowed to date people of the same religion or who were only allowed to marry people whose parents had good jobs. … I also have friends who study or leave to Europe and they come back home and are almost leading double lives, and sort of have their Western version and their home version.”

Naaman and Qatari composer Dana al-Fardan wrote the script in the space of a few months and the show premiered in 2018 at the Theatre Royal Haymarket in London's West End. However, in Lebanon, the musical made perhaps a deeper impact.

Naaman said, “Gibran was challenging society, religious obedience and the treatment of women, but in spite of all that people don’t discuss that side of his work. The pretty quotes come out at weddings and it’s all very positive, but I think it is more interesting to highlight how he was onto the dangers of tradition.”

While the musical departed very little from Gibran’s original text, one subtle difference was the repeated variations of the line “nothing ever changes in Lebanon.” It's an interpretation of a seminal quote in the novella, which reads, “Men, even if they are born free, will remain slaves of strict laws enacted by their forefathers.”

Naaman said the change was made to challenge the audience and make it contemplate the issues of sexism and stagnation that still persist.

However, Naaman stressed that even this small change was done in careful consideration of Gibran's works and ideology. "I always wanted to treat it the same way the British feel about performing Shakespeare. For a Lebanese person, Gibran is basically that, so I wanted to treat it with respect and care.”

However, Naanam did not aim to “hit people over the head” with criticism, but to add something to the culture of the Middle East.

“What’s been amazing about being in Lebanon is that it has made me remember why I wrote [the musical] in the first place. We wanted to give Middle Eastern audiences a story of their own — something they could see themselves in,” he said, adding, “The long-term goal of the show is that it is done by people in the Middle East, an entirely Middle Eastern cast doing it in their own land."

Such a play will be important as Gibran’s work is slowly lost on the next generation, Fenianos explained. “Recent studies clearly show that the new generation reads less. ... Gibran’s books were removed from the Lebanese school curriculum. We need the new generation to read and study Gibran’s work; we need them to be influenced by his beautiful and peaceful mind; we need them to reject war and injustice on all levels so we can have a better Lebanon.”