The Hamas movement abroad has announced its intention to develop a plan aimed at countering Israel’s systematic campaigns that are affecting the movement at several levels. 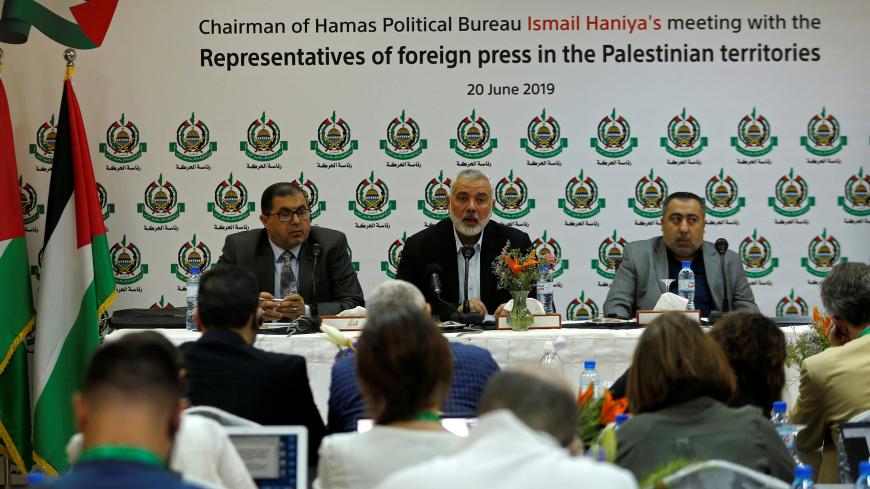 GAZA CITY, Gaza Strip — During a meeting held July 10 in Lebanon by the Hamas leadership abroad, the movement said it decided to develop a plan to counter Israel's systematic targeting of the movement, expressing regret that Palestinian, Arab and Islamic parties are involved in such campaigns.

Hamas has been recently facing arrests, prosecutions, a financial siege, campaigns to dry up its sources, and organized and programmed media campaigns that have affected the movement at the political, diplomatic, media and financial levels.

Raafat Murra, head of the media department of Hamas abroad, told Al-Monitor that the Palestinian cause is facing a serious and systematic attack, as the main Palestinian issues, namely Jerusalem and the refugees, are being liquidated as a result of Israeli and US understandings that led to the US "deal of the century" and the Bahrain economic workshop.

He said the main reason Hamas is being targeted is its political and popular clout and its ability to confront Israel and the plots aimed at liquidating the Palestinian cause. Israel, he said, is targeting the movement abroad through several means and measures.

“These measures include assassination operations, political pressure and security prosecution. Reports are also provided to several governments around the world with the aim of distorting the image of the movement and dealing a blow to its relations with these governments. Add to this the financial siege and the arrest operations that target a number of cadres and supporters of the movement,” Murra said.

He noted that the campaigns targeting Hamas abroad come in conjunction with campaigns targeting the movement at home, and these are exemplified by the Israeli siege on the Gaza Strip and the increasing Israeli attempts to spy on the movement, disrupt efforts to achieve national reconciliation and prevent the formation of a national unity government.

According to Murra, the targeting of the movement abroad comes in the context of US and Israeli efforts to liquidate the refugee issue, especially considering that Hamas has strong political, popular and media influence within the Palestinian refugee communities abroad and is working on consolidating and strengthening their role in the Palestinian national decision-making process, all the while securing their representation within institutions.

“We are currently engaged in basic efforts to address the threats to which we are exposed,” Murra said.

Asked about these efforts, he explained that they are mostly based on political contacts, relations with friends and allies, confronting arrest operations and security threats, overcoming the financial siege, deepening the relationship with the refugee community and rejecting normalization.

He stressed that what is mainly needed is strengthening the national action to provide a political and social security umbrella capable of confronting the deal of the century.

Murra refused to provide further details about the plan.

“We confirm that Hamas will remain committed to the project of resistance and liberation and will face attempts to target the movement with harder work and bigger efforts that eventually lead to independence,” he added.

Ibrahim al-Madhoun, a political analyst close to Hamas, told Al-Monitor that there is a targeted and comprehensive attack on the part of Israel and regional and other countries against Hamas, as well as its leaders and supporters abroad.

Madhoun said the reason the movement is targeted is the important role it plays abroad, as it supports both the Palestinian cause and the resistance with money and weapons and provides a favorable environment for the resistance. It also works on the mobilization of the people and on gaining political positions in favor of the movement and the cause. It mobilizes the Palestinian street in the diaspora and runs institutions abroad.

While he pointed out that the movement did not provide any details about the plan, he expected it to include a series of preventive measures, especially considering that Hamas has a wide network of political relations and institutions and valuable experience in political, media and institutional work. This, he said, qualifies it to counter the campaign targeting it.

Hussam al-Dajani, professor of political science at Al-Ummah University, told Al-Monitor that the most serious attack that the Hamas movement is dealing with is the political blockade and the lists of international terrorism. This, he said, makes the members and cadres of the movement subject to international prosecution and deprives them of financial and political stability, all the while disrupting their access to power, even if through the democratic experience.

“Some Arab and Islamic countries are trying to associate the movement with the Muslim Brotherhood, which is deemed a terrorist group, thus affecting and disrupting the movement’s foreign relations,” he added.

Dajani said that the most important reason behind this campaign is the absence of international justice and international arbitration regarding many resolutions. He noted that there is also the US pressure on European and Arab countries to condemn and sever ties with Hamas.

Hamas, he added, is not a terrorist movement but a national liberation movement rightfully resisting the occupation. He wondered why no Israeli party has ever been classified as terrorist.

Dajani pointed out that Hamas was politically affected by this campaign, as it is an ambitious movement seeking to promote the Palestinian cause in all international forums. The movement was also affected at the media level through the distortion campaigns that Israel is trying to launch against the leaders of the movement. Israel’s Channel 12 broadcast a video earlier this month in which Suheib Yousef, the son of Hamas co-founder Sheikh Hassan Yousef, talked about his disillusionment with Hamas. Economically, institutions are becoming cautious about financing the movement, be it directly or indirectly.

“This campaign has hindered the movement’s access to high-level diplomatic posts,” he added.

According to Dajani, Hamas is trying to counter the targeted attacks by opening up to the outside world and trying to promote itself as a flexible pragmatic movement, not a terrorist one. “Hamas is counting on its ability to achieve a breakthrough in the world’s dealing with it,” he added.

He noted that when responding to such attacks, Hamas faces a great challenge given the lack of national reconciliation. This is why the movement must focus on ending division.

While it is not easy for the movement to confront such attacks on its own, the international political changes could play out in its favor, especially considering that Hamas’ control of the Gaza Strip is a strong card that prevents the world from isolating it.