Egypt's security services issued strict instructions to Egyptian newspapers not to publish any views contrary to the government's official line on the US-proposed Palestian-Israeli peace deal. 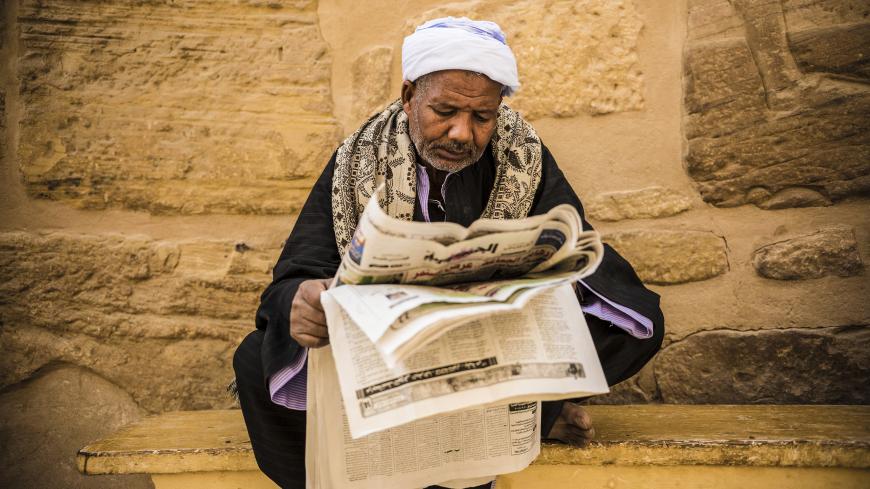 CAIRO — An Egyptian government source told Al-Monitor on condition of anonymity that the Egyptian authorities have banned the publication of any unofficial information about the United States' so-called “deal of the century,” particularly about the June “Peace to Prosperity” economic meeting held in Manama in partnership with Washington.

The Bahrain meeting was boycotted by all of the Palestinian political parties. A group of Arab countries including Saudi Arabia, the United Arab Emirates, Qatar, Jordan, Egypt and Morocco attended along with the European Union, the International Monetary Fund, the World Bank and some of the region's top businessmen.

Reuters detailed the key points of the economic plan presented at the Bahrain summit following a June 22 interview with Jared Kushner, who heads the initiative. Reuters reported, “Donor nations and investors would contribute about $50 billion, with $28 billion going to the Palestinian territories of the West Bank and Gaza, $7.5 billion to Jordan, $9 billion to Egypt and $6 billion for Lebanon.”

“The Bahrain Economic Workshop is an attempt to replace the principle of land for peace with the principle of money for peace,” said PLO Executive Committee Secretary Saeb Erekat in a June 18 statement. “We did not authorize anyone to speak on our behalf.”

Egypt's Foreign Minister Sameh Shoukry confirmed that Egypt participated in the meeting only to evaluate the proposed $50 billion US plan. In a June 24 interview with Russia Today Shoukry said, “It is important for Egypt to participate in order to listen and assess the proposal ... but not to approve it.” He added, “We have the right to evaluate and view it and to develop a vision about it. But the final say is for the concerned party, which is the [Palestinian Authority] as the legitimate representative of the Palestinian people.”

He also asserted, "The Egyptian state will not give away an inch of the Sinai Peninsula, for the sake of which many Egyptian citizens have sacrificed, and that nothing can undermine Egyptian sovereignty over Sinai.”

On June 24, Reuters reported that Palestinian officials briefed on the US deal said that “the political aspect envisages an expansion of Gaza, a small coastal strip, into Egypt’s North Sinai region, though Jason Greenblatt, Trump’s Middle East envoy, said 'rumours' about such a redrawing of borders were false.”

The government source told Al-Monitor that the Egyptian authorities allowed Egyptian media outlets to publish only news and articles in line with the Foreign Ministry's statements and Shoukry’s interview with Russia Today. The source explained, “The authorities issued instructions preventing the publication of any other news or articles quoting foreign agencies or newspapers, especially articles about Egypt waiving part of Sinai to the Palestinians under the so-called deal of the century."

Talk of dividing Sinai and settling Palestinians on its land is the most disturbing issue for the Egyptian authorities, which issued strict instructions to all newspapers and satellite networks not to comment on the topic, according to a source on the editorial board of the independent newspaper Al-Masry Al-Youm.

The source told Al-Monitor on condition of anonymity that the editor-in-chief of the newspaper, Abdul Latif Al-Manawi, was warned not to publish any unofficial news about Egypt's participation in the summit. “He was instructed to publish news that is consistent with the statements issued by the Ministry of Foreign Affairs, the Presidency of the Republic and the official bodies of the state in this regard,” the sources explained. “All editors of Egyptian newspapers were warned that the violating newspapers or news sites would be closed or blocked. The instructions were sent to a closed group on the mobile application Whatsapp to the editors-in-chief of newspapers and news websites.”

The source went on, “The instructions clearly noted that the only news that may be published on the deal of the century and Egypt’s participation in the Bahrain workshop is that in line with the statements of the Ministry of Foreign Affairs and statements issued by the Egyptian state-run Middle East News Agency, which highlight the Egyptian view on these two issues.”

Prominent journalist Yasser al-Zayyat denounced the ban on publishing news that contradicts the official statements. He described the measures as taking back the country to the era of nationalization of the press and one-sided media.

“This is an unhealthy climate for the development of the media and the press in Egypt,” he told Al-Monitor. “Attempts to impose certain views on all newspapers and ban publication of specific news are merely desperate attempts by the current regime to maintain the blackout policy and conceal its failure to manage the so-called deal of the century.”

Zayyat continued, “Egypt's participation means legitimizing the US and Israel’s plan to partition Palestine and not recognize the independent Palestinian state. The political part of the deal must be settled before talking about any mutual economic interests.”

He pointed out that Egyptian newspapers and news websites are the only platforms that can express opinions of political currents other than those affiliated with the regime. “Opposition political parties are almost nonexistent or have been tamed while efforts and activities by civil society have been undermined. This makes the press the only platform to express a public opinion against the deal of the century and the marginalization of the role of the Palestinian people in determining their destiny.”