Nabil Shaath, an adviser to Palestinian Authority President Mahmoud Abbas, traveled to Iraq to galvanize Baghdad's support for the Palestinian cause and perhaps make new connections with Iran along the way. 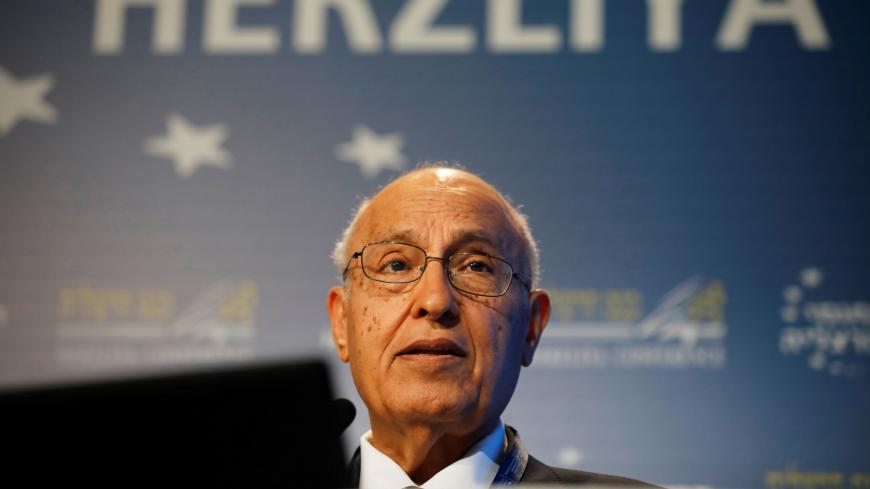 Palestinian envoy Nabil Shaath paid a five-day official visit to Iraq recently, as the Palestinian Authority (PA) faces ruptured relations with the United States, a halt in negotiations with Israel and lukewarm Arab ties — especially with Arab countries supporting the controversial US plan for peace in the Middle East.

Shaath, who serves as Palestinian President Mahmoud Abbas' adviser for international relations and head of the PLO’s Refugee Affairs Department, visited June 23-27 as part of the PA's campaign to strengthen its regional relations.

The PA's effort with Baghdad is twofold. First, Palestinians need Iraqi money to overcome their worsening financial crisis since the United States halted financial aid and Israel froze tax funds. Second, Iraq is politically and geographically close to Iran, which could allow the Palestinian leadership to widen its choices instead of having all its political eggs in a single basket.

Shaath's visit was loaded with political symposiums and official meetings with different political parties and various leaders. On June 25, he held a press conference to discuss his visit’s objectives.

“The US is trying to push for the 'deal of the century' with the help of countries in the region," he said, referring to the US administration's proposal for peace between Palestinians and Israelis. Shaath continued, "This is done by portraying Iran as the enemy of the Arabs. The US is trying to present Iran as the bad guy, but it's up to the Palestinians and Arabs — and not the US — to decide how to deal with Tehran."

Shaath said the US-led economic workshop June 25-26 in Manama, Bahrain — which Iraqi and Palestinian officials boycotted — was intended to dangle $50 billion in economic support in front of the financially strapped PA as a bribe for it to accept the peace plan and give up its goal of creating a Palestinian state in the Israeli-occupied West Bank and Gaza Strip. He reiterated Palestine’s rejection of Washington’s money, adding that Palestinians will not yield to pressure from the United States, which is seeking regional support for the deal.

During the news conference, Shaath called on Iraq to support Palestinians economically. He also welcomed Iran's support of the Palestinian resistance and praised Qatar for providing funds to help alleviate the Gaza Strip's dire economic and humanitarian situation due in large part to Israel's 12-year-long blockade.

On June 27, Iraqi Prime Minister Adel Abdul Mahdi affirmed Iraq’s support for Palestine. Abdul Mahdi also stressed that Iraq will commit to its share of the Arab financial safety net to support the Palestinian budget. Arab finance ministers pledged during their June 27 meeting in Cairo to pay $100 million a month to the PA. The PA's financial crisis has escalated since February, when Israel withheld $138 million from the tax revenues it collects on behalf of Palestinians, in response to stipends the PA pays to families of Palestinians wounded, killed or imprisoned by Israel. The PA, in turn, refuses to accept anything but the full payment.

Shaath delivered several lectures and met with the Iraqi parliament's Committee on Foreign Relations. He spoke before the Iraqi Bar Association, which subsequently announced it would form a legal committee to support Palestine in international forums.

Shaath later told Al-Monitor, “The Palestinian leadership stands with the opponents of the deal of the century, namely Iraq, the No. 1 supporter of the Palestinian people. I met with the Iraqi representatives: Shiites, Sunnis and Kurds. We're confident that Iraq will recover after the end of the American occupation and after the eradication of terrorism and the end of sectarian problems."

After fighting the Islamic State in the region, the United States has retained an estimated 5,000 to 6,000 troops in Iraq and has considered sending more as tensions rise with Iran.

Asked about his meetings with Iraqi Shiite leaders close to Iran, Shaath said, “Palestinians don't have a problem with Iran, as Iran has been supporting the Palestinian struggle. We seek to strengthen our relations with Tehran, and we don't consider it an enemy. The enemy is Israel. We, however, do not interfere with Iranian [Persian]-Arab differences.”

Hasan Khaled, an Iraqi journalist for the Arab 21 website, told Al-Monitor, “Shaath’s visit to Iraq — and before him Abbas in March — indicates that Palestine is seeking [a relationship] with Iran. Shaath’s meetings were mostly with Shiite leaders … and he did not meet with Sunni officials. The Palestinian Ambassador to Baghdad Ahmad Akl recently met with Shiite leaders who had previously refused to receive him.”

Khaled added, “Iraq has only money to give to the Palestinians, and Iran could have instructed Baghdad to support them financially as it seeks to sabotage Palestine’s relations with Saudi Arabia."

Akl told Al-Monitor, “Shaath’s visit has strengthened relations between the Palestinian and Iraqi leadership to confront the deal of the century and the Bahrain workshop. It is part of Palestinian efforts to forge alliances against Israel and the US policy in the region. … We have balanced relations to serve our political, security and economic interests."

Shaath’s visit to Iraq coincided with sit-ins and demonstrations there denouncing the Bahrain workshop. Dozens of Iraqi protesters broke into the Bahraini Embassy in Baghdad on June 27, prompting Manama to denounce the incident and recall its ambassador to Iraq.