The effects of US trade policy toward China may strike a blow on global markets and possibly affect US national security. 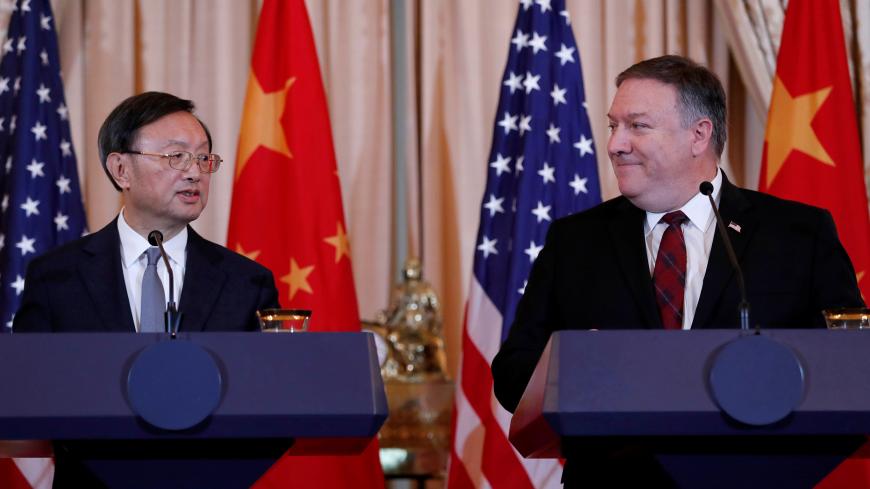 US Secretary of State Mike Pompeo listens to Chinese Communist Party Office of Foreign Affairs director Yang Jiechi speak as the two countries hold a joint news conference after participating in a second diplomatic and security meeting at the US Department of State, Washington, Nov. 9, 2018. - REUTERS/Leah Millis

Executing foreign policy choices will always incur costs along with hoped-for benefits. But willfully ignoring how US economic statecraft toward Iran and China might have unintended consequences in the Middle East creates dangerous blind spots for national security.

There are two current key misunderstandings in the effects of US foreign economic policy on the Middle East, which National Security Council senior director for the Middle East Victoria Coates elaborated on in her remarks at the Atlantic Council on June 6. The first misunderstanding is about the relation between US sanctions on Iran's oil exports and subsequent opportunities for American energy. The second is about US trade policy toward China and the ripple effects on global markets, including the Middle East.

First, the Trump administration is heralding US energy production, particularly shale production and liquefied natural gas exports, as both domestic energy independence and a growing source of export revenue. Unfortunately, there is not a clear understanding of how the impositions of sanctions on Iran's oil exports may or may not increase export opportunity for US energy.

Coates later suggested the United States is facilitating supplying China's energy needs via Saudi and Emirati increased supply. It is true that Saudi Arabia and the United Arab Emirates are concentrating on supplying China's energy demand, but they are not doing it out of obligation to the United States. They are doing it for their own objectives, securing market share that they have no intention to return to Iran, but neither to share with the United States. They aren't doing America a favor. And in the next OPEC meeting planned for this month, if members continue to try and limit production to boost oil prices, the on-demand phone and Twitter diplomacy US President Donald Trump employs may fall very flat.

The second misunderstanding is more severe. We know there is a cost to the current US trade policy with China. As International Monetary Fund (IMF) managing director Christine Lagarde argued at a recent event at the American Enterprise Institute, the IMF is forecasting a decline in global growth, at a cost of $455 billion to the global gross domestic product, if the US-China trade war continues through 2019. Coates replied to a question from the audience on the ramifications of US trade policy with China on countries in the Middle East. She argued that Trump's imposition of tariffs on China have no connection and "are separate" to the administration's Middle East policy.

This is dangerous thinking and a flawed understanding of the interaction of global markets. There are good reasons for the United States to consider China an adversary and use economic tools to counter it. However, those same tools may destabilize partners in the Middle East and push them closer to China, where their economic and political interests are more aligned.

More and more, the global economy — and particularly that of the Middle East — is closely tied to the growth trajectory of China, in China's need for energy, but also in China's ability to provide infrastructure finance. As I argued in my report on the Gulf's Eastward Turn, Gulf oil exporters, in particular, will depend on energy demand in India and China for future revenue in crude oil but also in their growing refining businesses and petrochemical ventures. Middle-class consumer growth in Asia is the most important driver of future economic growth globally. Ties between emerging markets are becoming more important than the less dynamic growth prospects of North America and Europe.

While there could be some short-term winners from the US trade policy toward China, mostly the global economy takes a hit. Analysts at Standard Chartered and Japan's Nomura bank find some countries like Vietnam, Malaysia and Taiwan may benefit for now from the US-China trade war. But if a true global slowdown occurs, we all lose. For the Middle East, we know the effects of a sharp decline in oil prices in late 2014 led to a decrease in remittance flows from the Gulf to the wider region. It also led to the restructuring of labor markets, displacing workers to return home to fragile economies still reeling from the uprisings of 2011. Now even more than in 2014, states like Ethiopia, Egypt, Jordan, Lebanon and Pakistan all rely on Gulf States as a source of financial stability.

Calculating the costs of economic statecraft and the tools of tariffs and sanctions is vital to executing foreign policy goals. For the Middle East, oil exporters and US security partners may be pushed closer to China as a result of US policy. The sensitivity to a global recession, especially a slow-down in China's growth trajectory, exacerbates the vulnerabilities of states dependent on Gulf financial support, either through direct financial intervention and aid and through remittance flows. Russia also gains leverage as a partner to OPEC, in any efforts to support a price floor for declining oil demand. Trump relies on and prefers economic tools to reach his foreign policy objectives. But if the government's own analysts fail to acknowledge the interconnection of their policies and competing objectives, there is little hope of success.