A lack of support for local Arab armed groups in the fight to retake the Arab province of Deir ez-Zor and alleged subsequent abuses by the Kurdish-led Syrian Democratic Forces may prove a threat to stability in this key geographical area. 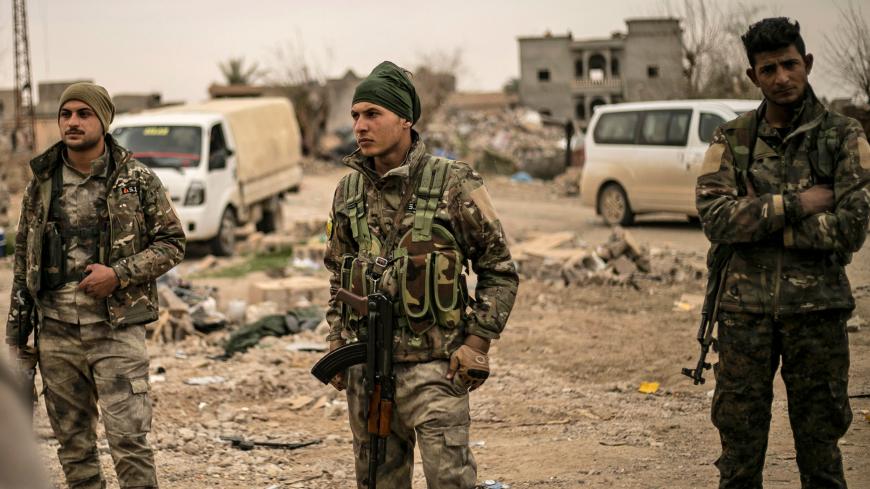 GARANIJ, Syria — The Syrian Elite Forces (SEF) were meant to be a multi-tribe, moderate Arab armed group that would be instrumental in taking back their home province of Deir ez-Zor from the Islamic State (IS). It did not, however, end up that way.

The Kurdish-led Syrian Democratic Forces (SDF) led the fight against IS east of the Euphrates River with strong support from the anti-IS coalition. They are now administering the entire area.

Though many Arab fighters in Deir ez-Zor and al-Shaddadi in southern Hasakah province, say that they still belong to the SEF, the group has not actually fought since the 2017 battle for Raqqa, in which they participated for about a month. A dispute with the SDF and their refusal to fight under — instead of alongside — the Kurdish-led group led to their withdrawal.

Some now claim to be paying dearly for this.

Over several days in late May 2019, Al-Monitor spoke to former and current members of the SEF and was repeatedly told that the SDF had targeted those that refused to join with arbitrary arrests, “confiscation” of cars and weapons, and other abuses of power.

Interviews were held in al-Shaddadi and Deir ez-Zor, as far south as Hajin.

One of the interviewees, a regime army defector and former member of the SEF, said he had previously conveyed information to the SDF and the international coalition about IS sleeper cells but would no longer do so.

He told Al-Monitor on condition of anonymity that he saw no reason to put himself at risk of being killed by IS simply to benefit a group arbitrarily arresting his fellow fighters.

Many of the SEF eventually joined the SDF — some out of disagreement with how it was run but many simply to get a salary and/or to continue fighting IS, which had killed many of their relatives.

In late 2018, an office reportedly opened for the recruitment of new members by the SEF. Sources told Al-Monitor that this was for the possible creation of a buffer force in northern Syria along the Turkish border, but no progress seems to have been made.

In Garanij, in the Shaitat tribal area, SEF commander Younis Hammoud al-Mousa told Al-Monitor that he had taken part in the Raqqa battle but that “the SDF were deliberately making problems with us and always held the Arab fighters responsible for everything.”

He claimed, “We were subjected to a great deal of harassment from them."

Prior to the SEF, he had fought in Qalamoun and the Mahroutha area from 2015 until early 2016 with Jaish Usud al-Sharqiya (Lions of the East Army), another armed opposition group from Deir ez-Zor that had received funding from 2015 until at least mid-2017 from the Amman-based Military Operations Command (MOC). However, the funding was stopped prior to the battle for the eastern region. Jaish Usud al-Sharqiya continues to assist with security at the massive Rukban camp for internally displaced persons along the Syrian-Jordanian border.

Several commanders of armed groups from Deir ez-Zor told Al-Monitor over the years that the United States set stringent rules on fighters they would provide support to from Arab groups, but that individual fighters in the Kurdish-led SDF were never vetted.

Starting in early 2016, when the group was officially formed, the SEF were funded directly by the former head of the National Coalition for Syrian Revolutionary and Opposition Forces and Shimmari tribal leader, Ahmed Jarba.

SEF military commander Abu Saleh al-Shaiti had told this correspondent in early 2016 that he had gone to Jordan in 2013 to speak to the MOC, which was focused on arming and training anti-regime rebels — and had warned them how dangerous IS was but was ignored.

He noted that Jarba had in early 2014 financially supported his previous armed group, Jafar al-Tayyar, when it was fighting IS in Deir ez-Zor.

It was only in late 2014 — after the taking of Mosul and the Yazidi massacre in Iraq — that the international focus shifted to fighting IS, Abu Saleh told this correspondent in 2016. By then, Deir ez-Zor opposition fighters had left the eastern region after fighting both the regime and IS with little support for over six months.

Many remain even now dispersed throughout the country. The armed opposition group, Ahrar al-Sharqiya, active in northern Hama, is mostly made up of fighters from Deir ez-Zor, for instance.

Eyad Shamsi, who had been a regime army officer prior to defecting and joining the Asala wa-Tanmiya opposition group, and previously also a member of the High Negotiations Committee, told Al-Monitor that Deir ez-Zor had been crucial in a program to help regime officers defect, but that foreign countries had never planned to allow local Arab groups to take back their area.

The United States has been especially active in eastern Syria in its support for the SDF.

Arab armed groups from the province were, however, repeatedly led to believe they would receive more international support, Al-Monitor was told by several commanders.

In an interview in early 2019, Abu Saleh told this correspondent he had helped to bring some men — who had fought with him against IS in the early days of the conflict — back to eastern Syria from Idlib. At that time, he said, he believed they would be able to get funding to retake Deir ez-Zor.

One of these men, a former regime officer known locally as Abu Ishaq al-Ahwazi, later joined the SDF out of economic necessity when international support for the SEF did not come through. He took part in the anti-IS battles to liberate Baghouz and Hajin — which were liberated from IS in December 2018 — but was assassinated, allegedly by IS, in early 2019 near the town of al-Busayrah.

One man from the Shaitat area who lost his teenage son in the fight to liberate Baghouz burst into tears in mid-May when speaking to Al-Monitor, saying he wished his son could have been “martyred” in the fight to retake their home region with local Arab forces and not the SDF.

During Al-Monitor’s visit to Deir ez-Zor, a fighter from the Shaitat tribe — who Al-Monitor had rode with in the same vehicle earlier in the day — was allegedly arrested at an SDF checkpoint. Al-Monitor was told by his relatives that he was accused of “being IS” and was detained from around 11 p.m. until 7 p.m. the next day, when he was released after tribal intervention.

Al-Monitor was sent photos of the man’s back and arms with marks possibly caused by lashings, according to a doctor contacted for a professional opinion. Al-Monitor could not, however, verify what actually happened or who was responsible.

Amid accusations of abuses committed by the SDF, whether by individuals or systemically, a general perception that the international community backs the Kurdish-led SDF without listening to local Arabs on the ground is likely to foster more serious problems if not addressed.