A bipartisan group of senators rebuked President Donald Trump for his Iran emergency declaration hours after Tehran shot down a US drone over the Persian Gulf. 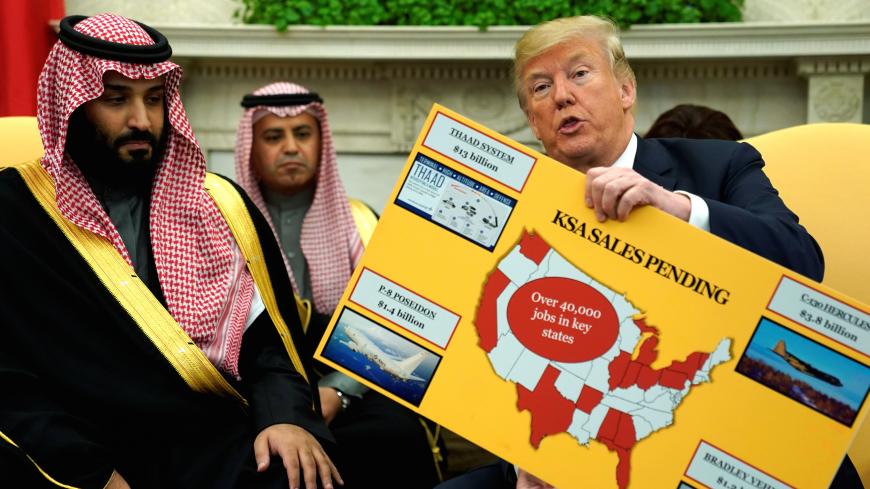 A bipartisan group of senators rebuked President Donald Trump over an emergency declaration on Iran today — just as tensions in the Persian Gulf once again heat up after Tehran shot down a US drone.

After securing a deal with Majority Leader Mitch McConnell, R-Ky., Democrats mustered enough Republican support to block $8.1 billion worth of 22 separate arms transfers involving Saudi Arabia and the United Arab Emirates (UAE). Secretary of State Mike Pompeo had cited an emergency threat posed by Iran last month in a bid to forestall such a vote.

“This weapons sale the administration is trying to push through without congressional review will not in any way equip the United States or our allies to better face any imminent threat from Iran,” Bob Menendez, D-N.J., argued on the Senate floor ahead of the vote.

The Senate voted 51-45 en bloc to halt 20 of the Gulf arms transfers. Senators also voted 53-45 on two separate resolutions to prevent defense contractor Raytheon from manufacturing precision-guided munitions in Saudi Arabia. The co-production arrangement in particular has raised concerns among lawmakers that the Saudis could gain access to US technology to produce their own smart bombs.

This is the first time the Senate has advanced legislation to block arms sales to both Saudi Arabia and the UAE after two failed attempts to block separate sales to Riyadh in 2016 and 2017.

The Democratic-controlled House has vowed to take similar action to halt the arms transfers, but Congress does not have enough votes to override the veto the White House threatened to issue today.

Today’s votes come after the Pentagon said today that Iran shot down a US surveillance drone in the Gulf over international waters. Tehran, however, said the drone was shot down over its territorial waters.

An interagency group of Trump administration officials also briefed lawmakers on the latest Iran developments today. Emerging from the briefing, Sen. Lindsey Graham, R-S.C., told reporters that he would meet with Trump later today to discuss nominating a permanent defense secretary and the Iran issue. Graham has advocated striking Iranian oil refineries in the event of future tanker attacks in the Gulf.

Tensions have ratcheted up in recent months following the Trump administration’s increased sanctions on Iran and deployment of additional military assets to the region. Earlier this week, the Pentagon announced it was deploying 1,000 more troops to the region to counter Iran after the United States blamed Iran for attacks on a Japanese and Norwegian vessel in the Gulf of Oman — charges Tehran denies. On June 18, a short-range missile struck an Iraqi oil site used by foreign oil companies, including US firms ExxonMobil and Shell, after separate attacks on bases housing US troops in Iraq.

Pompeo used Iran to justify an emergency declaration to get around Menendez’s hold on 120,000 precision-guided munitions to the Saudis. But most of the sales the Senate voted to block today were intended for use in Yemen, where the Saudi-led coalition is battling Houthi rebels. Tehran has supplied the Houthis with ballistic missiles the rebel group routinely fires into Saudi territory.

Nonetheless, Assistant Secretary of State R. Clarke Cooper testified last week that many of the arms transfers would not take place for several months or years down the line and that the Trump administration had been considering the emergency declaration before the recent escalation with Iran.

Risch has also committed to introduce and advance legislation to address Saudi Arabia’s role in the Yemen war and its murder last year of journalist Jamal Khashoggi. Earlier this week, the United Nations said there was “credible evidence” that Saudi Crown Prince Mohammed bin Salman was involved in Khashoggi’s murder.

Still, Risch argued that the arms transfers are necessary as tensions heat up in the Gulf.

“It is obvious that a miscalculation can occur, and that is the most worrisome here,” he said on the Senate floor ahead of the vote. “These are sales needed to address the legitimate security requirements of other countries we support in response to numerous threats from Iran and its proxies. These threats are real as the events just over the recent 24 hours have shown us,” Risch added.