As scrutiny grows over arms transfers to Washington’s Gulf allies, the Senate narrowly voted to allow weapons sales to Qatar and Bahrain. 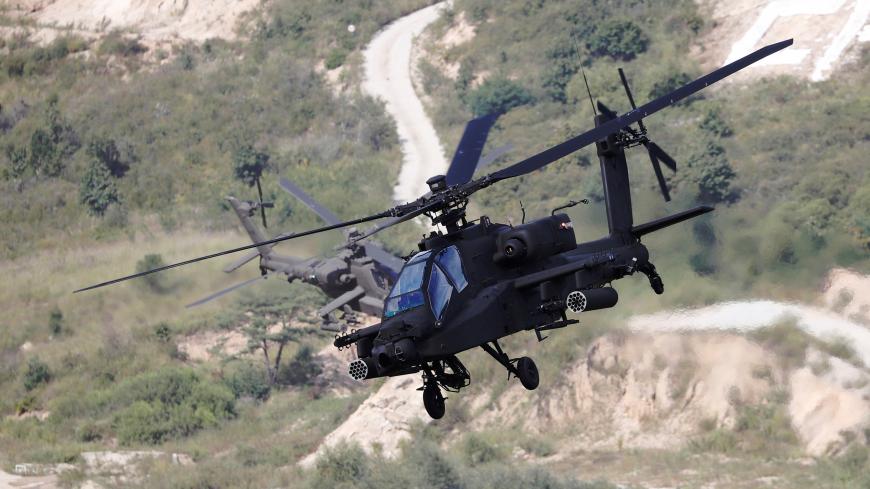 Qatar and Bahrain today narrowly avoided the growing congressional backlash against US arms sales to the Gulf Arab states.

The Senate voted 57-42 against moving forward on a resolution blocking a $3 billion sale of 24 Apache attack helicopters to Qatar and 56-43 against a separate bid to stop a $750 million sale of air-to-air missiles for Bahrain.

Incensed by the Donald Trump administration’s attempt to circumvent a congressional hold on arms transfers to Saudi Arabia and the United Arab Emirates, Democrats joined Sen. Rand Paul, R-Ky., in his bid to force debate on the Qatar and Bahrain sales. Paul argued that the sales would exacerbate a Middle East arms race, citing Doha’s support for Islamist groups in Syria and Manama’s participation in the Saudi-led coalition against Yemen’s Houthi rebels.

“The Middle East is a hot cauldron continuing and continually threatening to boil over,” Paul said on the Senate floor ahead of the votes. “I think it’s a mistake to funnel arms into these century-old conflicts. There is no great certainty that the arms we send to the Middle East aren’t one day used against our own soldiers.”

This marks the first time Congress has voted on blocking an arms sale for Qatar, which has been blockaded by Saudi Arabia, the UAE and Bahrain for the past two years. In making his case, Paul pointed to a hacked email from former Secretary of State Hillary Clinton, in which she accused Qatar and Saudi Arabia of "providing clandestine financial and logistical support to [the Islamic State] and other radical Sunni groups in the region."

This time around, the Trump administration's invocation of Iran as an emergency threat to bypass a hold on 120,000 precision-guided munitions for the Saudi-led coalition fighting in Yemen prompted a majority of Democrats to rally around Paul’s effort in a bid to claw back congressional oversight authority on arms deals. Sen. Bob Menendez, D-N.J., the top Democrat on the Foreign Relations Committee, said he would ultimately have voted against blocking arms sales to Qatar and Bahrain but voted on the procedural motion as a message to the Trump administration.

Menendez has also introduced 22 separate resolutions blocking $8.1 billion worth of arms transfer involving Saudi Arabia and the UAE, which the Senate could vote on as soon as next week. House Democrats introduced a series of similar measures on Wednesday.

“I don’t have the same issues with these sales as I do with the Saudi sales, but I think we should assert our right to debate arms sales,” Murphy told Al-Monitor. “We have to send a signal that we’re serious about arms sales powers.”

Every Democratic presidential candidate in the Senate voted to advance both resolutions.

But opponents of Paul’s resolutions, including the majority of Republicans, warned against using them as a referendum on the Saudi and Emirati transfers, pointing to the separate Menendez resolutions.

“Whatever frustrations my colleagues may feel with the course of the conflict in Yemen, taking swipes at our relationships with Bahrain and Qatar is not the right response,” Senate Majority Leader Mitch McConnell, R-Ky., said on the floor ahead of the vote. “Bahrain’s involvement in the Yemen conflict has been limited to defensive border security operations. And for the past two years, Qatar has been completely uninvolved.”

Republicans also argued that restricting Gulf arms sales would be inappropriate given last month’s attack on four ships in the Strait of Hormuz and today’s attack on two more vessels in the Gulf of Oman, all of which the Trump administration has attributed to Iran.

“News this morning of attacks on two more civilian tankers in the Gulf lend further weight that our allies in the region need greater capabilities to have more for their defense,” said Senate Foreign Relations Chairman James Risch, R-Idaho.

Correction: June 13, 2019. Because of inaccurate information provided to Al-Monitor. Sen. Warren was initially mistakenly listed as voting against advancing the Qatar resolution.