How Russia plans to take part in building Syria's IT sector

As Syria seeks to restore some of its damaged IT facilites and build "an information society" in the country, Russian companies consider opportunities to chip in. 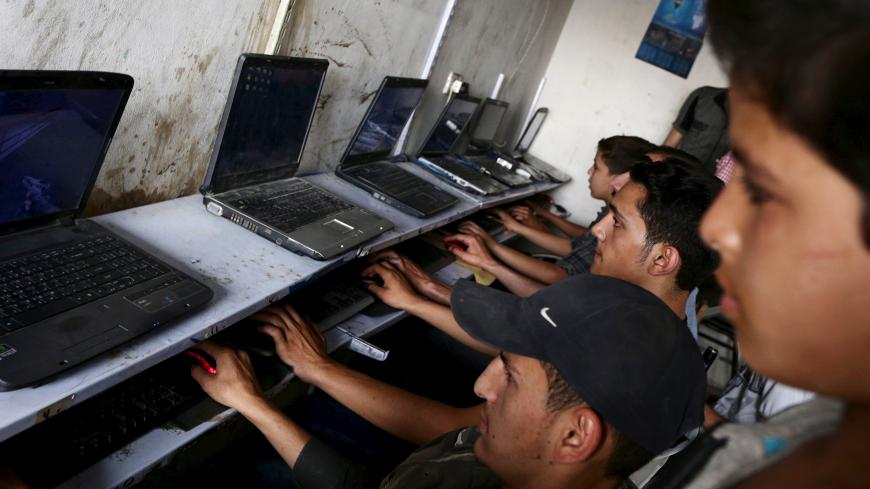 Syrian youths play games and use computers at an internet cafe in the Douma neighborhood of Damascus, Syria, July 23, 2015. - REUTERS/Bassam Khabieh

Syrian Minister of Presidential Affairs Mansour Azzam and Russian Deputy Prime Minister Yury Borisov met in Moscow on June 4. The meeting was one in a series of bilateral discussions aimed to implement decisions adopted at the 11th meeting of the joint Permanent Commission for Trade, Economic, Scientific and Technical Cooperation, of which Borisov is the co-chair, held in Damascus in December 2018.

As the Syrian authorities seek to build “an information society” in the country — as part of the reconstruction and renovation efforts — Russian information technology (IT) companies are eyeing yet another promising area.

In prewar Syria, the growing access of citizens — especially the youth — to IT technologies such as satellite TV, internet and cellphones, which provided information from abroad, created high expectations on reforms and upward mobility, all of which, amid unsatisfied desires, have been gradually contributing to the protest moods.

The Syrian Computer Society (SCS), founded in 1989 and later headed by Bashar al-Assad, emerged as a social incubator for the Syrian elite's youths. During the war, the SCS became allegedly linked to the pro-government Syrian Electronic Army, while Syria was identified by Western experts to be the first Arab country to have an Internet Army hosted on its national networks to openly launch cyberattacks on its enemies.

In 2000, the first mobile operator, Syriatel, was founded in Damascus by Rami Makhlouf, one of Assad's cousins. It was soon joined by another operator, named Areeba, which was rebranded as MTN Syria in 2007, after being sold to the South African MTN Group.

In 2002, Damascus, in cooperation with the United Nations Development Program, launched an $8 billion national strategy for telecommunication and information, presenting the 10-year road map in January 2004 (with the government contributing $2 billion), which was put on hold by the crisis. This strategy was aimed at supplying high-quality telecom/data exchange services and accessing the internet, developing the software and web content industry, and enhancing the transparency of governmental procedures and thereby building the information society. The Ministry of Education, in cooperation with UNESCO, formulated a strategy for the use of IT in schools via e-libraries and utilize TV and internet services to reach illiterate citizens without high spending within the “illiteracy e-radication” project. The Ministry of Industry established in cooperation with the Syrian European Business Center an e-system for the registration of private industrial firms.

The Syrian e-Government interactive web portal has been available in Arabic and English since 2012. In June 2017, Assad announced governmental reform that included the creation of an interministerial “assistance center” alongside an “electronic feedback center” in order to ensure contact between the authorities and regular citizens, along with a “human resources” center.

Despite lack of funding, Damascus kept the IT projects in the 2019 budget. They imply elements of electronic government, such as e-signature and e-document exchange, under the auspices of the Ministry of Communications and Technology (MOCT) and its subordinate the National Agency for Network Services (NANS). In 2015-16, such ideas had been promoted by then-Minister of Administrative Development Hassan al-Nouri, a wealthy US-educated businessman from Damascus and one of three candidates in the 2014 presidential elections. Since then, NANS has had intensive contact with the Russian Ministry of Digital Development, Communications and Mass Media on the e-signature project.

The ultimate goal is to create a modern unified IT system for administrative and financial activities in the public sector. This system includes an e-document workflow platform, i.e., the creation of documents and signing them by e-signature as well as enabling users of massive processing of documents and creating conditions for simultaneous work with different accounting systems. NANS is also interested in Enterprise Resource Planning (ERP), based on Cloudnet technologies (substituting Oracle), and in building a relevant data center as a possible joint project with Russian partners.

Other prospects for Russian-Syrian IT cooperation could emerge in the interest of the following Syrian government agencies:

The country’s postal service, Syrian Post, which is subordinate to MOCT, is looking to adapt advanced logistics technologies that were acquired recently by postal establishments in Russia and Kazakhstan. This includes the automation of delivery and increasing the productivity of couriers via integration with data systems, call centers and applications on courier smartphones; building optimal delivery paths; and calculating time of arrival, depending on the traffic and the sequence of deliveries, all with zero investment in the reconstruction of the postal logistics network. The Syrian Post is also interested in implementing the B2CPL (business to consumer party logistics) service on a large number of orders.

In November 2018, the Ministry of Tourism initiated interministerial discussions about perspectives for the inauguration of the national eVisa Issuance & Inspection System, based on advanced international practices and with a view to receive investment and technical aid from friendly countries, including Russia. This project aims to upgrade consular services, currently not available in many countries due to Western sanctions, thereby encouraging tourism and cultivating the image of a “peaceful Syria.” It can imply both the Electronic Visa Application System and the corresponding inspection solution, connecting border control facilities to the Central Visa Database. In parallel, the Ministry of Tourism has been seeking solutions on how to launch a national system for hotel and bed-and-breakfast accommodation and office space rentals, as access to global systems such as Booking.com are unavailable due to the sanctions.

Syrian financial institutions, both national and international banks including the Central Bank of Syria, Commercial Bank of Syria, Real Estate Bank of Syria, Syria International Islamic Bank, Al-Baraka Bank Syria, Cham Bank, Byblos Bank Syria and Bank of Jordan Syria, are analyzing the prospects for an upgrade of cybersecurity and anti-spam software products where Russia has been traditionally taking the lead.

For instance, among other things Russian companies may be interested to provide to the Syrians is the Network Computer Incident Handling System that is able to detect and report computer attacks in internal (protected) and external (internet) networks; provide a platform for storage of billions of large records, designed to store media data, system operation logs, and computer incident and banking transactions logs (with density of stream of the downloaded data at 200 TB/day and the number of records up to 100 million/day); as well as a predictive system for identification of abnormalities in banking transactions, based on “big data” and machine learning; and open universal front bank offices, securing standardization of transactions for individuals. In addition, Syrian banks have expressed interest in logistics banking platforms/artificial intelligence systems of modelling safe storage and delivery of valuables to ATMs and branches, serving clients in distant offices.

The Syrian leadership seems to view the IT sector as a market perspective and a locomotive for the country’s reconstruction, as well as to revive social and economic life, in order to keep and upgrade accustomed Western technologies, bypassing the sanctions, and at the same time get access to selective unique non-Western software solutions — by relying on friendly states, mainly India and Russia. Yet prospects remain largely unclear, due to anti-Syrian sanctions and limited national financial and investment resources.