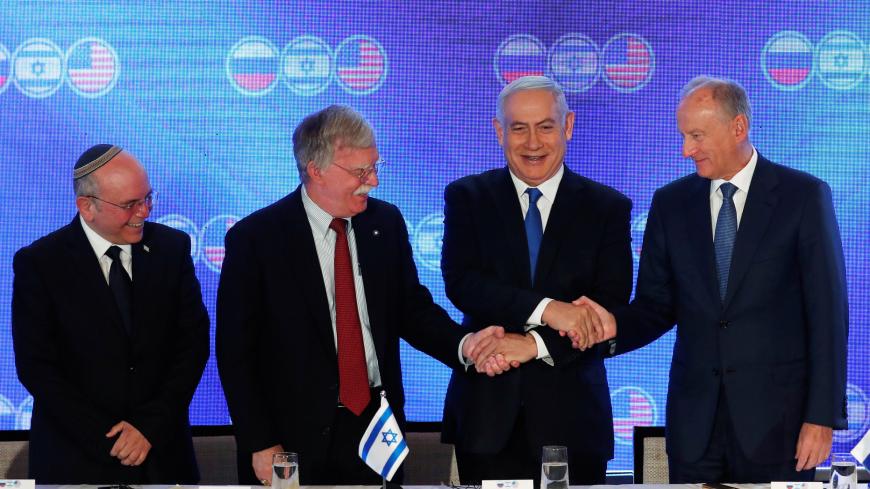 MOSCOW — The much-awaited trilateral meeting of the security chiefs of Russia, Israel and the United States delivered on expectations: no breakthroughs nor revelations of concrete proposals, but lots of mutual political signaling, diplomatic posturing and ground-setting for next engagements.

Iran predictably dominated the agenda of the talks in Jerusalem today, and the parties each took predictable stances on Tehran’s policies.

Speaking in at the morning session, Secretary of the Russian Security Council Nikolay Patrushev noted that Moscow and Tehran are “conducting joint activities in counter-terrorism.”

“We have the opportunity [with Iran] to mutually influence each other’s [policies] and have the opportunity to hear one another. We understand the [security] concerns that Israel has, and we want these threats to be eliminated so that Israeli security is guaranteed. It’s very important to us. There’re some two million Russian-speaking people living in this country and we should never forget that. At the same time, we should never forget about the national interests that other regional powers have. If we fail to acknowledge them, I doubt we can reach a meaningful result,” Patrushev stressed.

The remarks reflect the core of the dilemma for Moscow in its pursuit of a compromise in the Israeli-Iranian stand-off. At the same time, the talking points used are meant to convey the rationale behind Russia’s own position. Thus, the reference to two million Russian-speaking Jews is aimed at Iran and Arabs rather than the Israelis themselves, some of which support President Vladimir Putin’s policies in the Middle East but many of whom are quite critical of them.

“I fully share Prime Minister [Benjamin] Netanyahu’s position on how he sees future Syria — peaceful and secure. I’d only add that it should be sovereign, independent, with its territorial integrity preserved — this is our ultimate goal,” Patrushev subtly noted, following the remarks by Netanyahu. “This cannot be done in one leap. Therefore, we need to plan our activities in the way to have on board the countries that have a stake in the process, have an interest to work towards the result.”

Prior to the Jerusalem meeting, the Russian Security Council stated the talks would focus on “steps that need to be taken to settle Syria, destroy the remnants of terrorists, facilitate humanitarian assistance and socio-economic reconstruction of the country.” The Russian delegation was said to be bringing “concrete ideas” on what could be done on all of these matters with the inclusion of key Middle Eastern countries.

Following the talks, Patrushev made another interesting statement, calling Israeli strikes on what it sees as Iranian assets in Syria “undesirable.” It's nothing new, as Moscow has always complained about these actions, yet it’s important that the words came from the top level security official on his visit to Israel.

“Many instances of [Israeli] strikes [in Syria] could be prevented by non-military means in order to localize the situation that concerns Israel,” Patrushev noted, calling for better interaction between the Russian and Israeli militaries.

Patrushev made it clear Moscow deems the meeting in Jerusalem important both in itself and as a potential start of similar discussions on regional security. Russia’s insistence on acknowledging Iranian interests has to do with Moscow’s vision for real progress in such discussions and a starting point for depolarizing the political atmosphere in the Middle East. Russia also sees its attempt to find middle ground on Iran as a catalyst for its own engagement with Tehran: If not pressured, Moscow believes, Iran will be more prone to compromises in Syria and beyond.

Patrushev was mum on the issue of the departure of foreign forces from Syria, a point that Netanyahu brought up in his own remarks. Although it’s often believed that Moscow is not happy with the Iranian influence over Damascus, Russia sticks to the position that since the Iranians operate in Syria upon invitation by the official government, it’s for Damascus to discuss the terms of their departure. Even if the issue is to be addressed at other venues, Moscow argues, it should be negotiated with Iran rather than pushed upon it.

“We’ve agreed on most issues regarding what kind of Syria we’d want to see at the end of the day. But as far as specific ways are concerned on how to make this happen, well, we need to continue the dialogue. I hope given the spirit of the good will we’ve seen in these talks we can make it happen, eventually,” Patrushev said.

The meeting is also critical groundwork for the Putin-Trump encounter in Japan’s Osaka later this week. Details of the meeting between the two leaders and its agenda are not available, but the issues discussed in Jerusalem will definitely be raised. The challenge for Washington and Moscow in this interaction is to decouple the Syria-Iran agenda as part of a potential venue of joint activity from the bitter state of US-Russia’s own bilateral relationship.

"I don’t know, let them decide themselves whether they need to foster relations with Russia or not. Therefore, if they need dialogue — please, we are ready. If they don’t need it, we will wait until they mature," Putin said over the weekend.

Putin expressed skepticism over prospects of normalization with the United States but spared Trump blame for it, saying, "We see that the system is so that many things, which [Trump] wants to do, cannot be done. Although, certainly, a lot depends on the political will."