Hezbollah Secretary-General Hassan Nasrallah is calling for a Palestinian-Lebanese dialogue to counter the US peace plan, an approach welcomed by Hamas and Islamic Jihad. 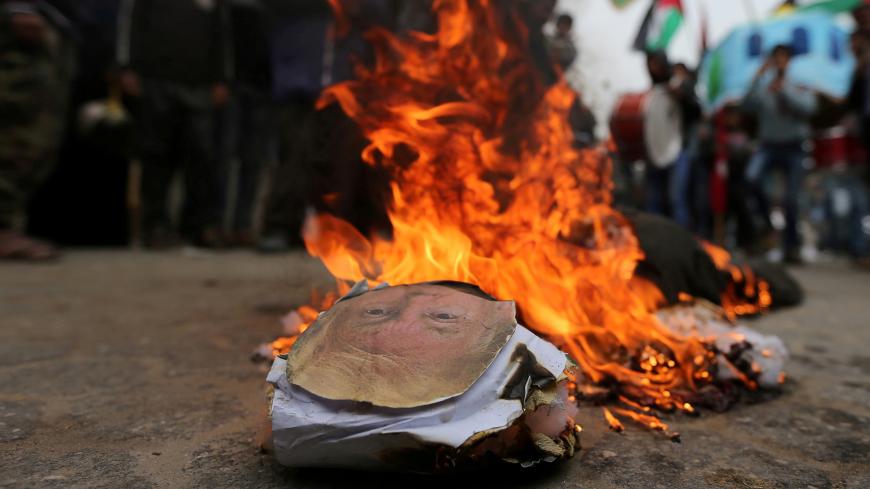 Palestinian demonstrators burn an effigy of President Donald Trump during a protest against US aid cuts, outside the offices of the United Nations, Gaza, Feb. 11, 2018. - REUTERS/Ibraheem Abu Mustafa

RAMALLAH, West Bank — As confidence in the Donald Trump administration's Middle East peace plan appears to be faltering, even in the United States, cooperation for challenging the deal seems to be growing among Palestinian factions, Lebanese Hezbollah and other critics.

The United States has scheduled an “economic workshop” for June 25-26 in Manama, Bahrain, where aspects of the so-called deal of the century are to be presented. The Palestinians, who were not consulted on the meeting or on the peace plan generally, plan to boycott it. The list of attendees remains tentative.

In a May 31 speech marking International Quds (Jerusalem) Day, the annual event initiated by Iran to show support for the Palestinians, Hezbollah Secretary-General Hassan Nasrallah remarked, “It is possible to push the deal of the century to failure, and we are pushing for this outcome. The axis of resistance will stand against the deal of the century.”

Days earlier, in a May 25 speech on Lebanon's Liberation Day, Nasrallah had called for a Palestinian-Lebanese dialogue to oppose the peace plan. He stated, “There is a common interest at the Lebanese national level as the Lebanese people reject naturalization [of Palestinians in Lebanon]. This is a shared sentiment, as the Palestinians are also opposed to naturalization and want to preserve their right to return.”

Hamas has welcomed Nasrallah’s statements. In a May 26 statement, Hamas spokesman Rafat Mubarak said, “A Lebanese-Palestinian dialogue is the best and the strongest tool to fight the deal of the century and the plan to resettle [Palestinian refugees in Lebanon] and deny them the right of return.”

It appears that the yet-to-be-unveiled US proposal has become an opportunity for the strengthening of ties between Hamas, Islamic Jihad and Hezbollah. Osama Hamdan, Hamas representative in Lebanon, told Al-Monitor, “The relationship between Hamas and Hezbollah was and will remain excellent. The most important achievement we could accomplish as Trump pursues his peace plan is to reestablish the importance of the Palestinian cause in the Arab and Muslim world.”

Hamdan further asserted, “Nasrallah’s call goes hand in hand with [his] movement’s decision to reunite Arab and Islamic efforts, irrespective of their disagreements.” According to Hamdan, “[Answering the call will require] some research into the measures, tools and coordination efforts needed through work with Palestinian factions and Hezbollah.”

Husam Badran, a Hamas political bureau member and the movement's lead on international relations, told Al-Monitor, “It's important to face the deal of the century with an Arab-Palestinian consensus based on a strategy of unifying all efforts. Nasrallah’s call falls within this context, and we welcome it. This is the decision expressed by the different Palestinian factions.”

Badran emphasized, “Responding quickly and preparing for a Lebanese-Palestinian meeting [is important], especially since the deal of the century aims to annul the right to return.”

Palestinians have already begun working toward such a meeting. Ihsan Ataya, Islamic Jihad's representative in Lebanon, told Al-Monitor that various Palestinian political forces in Lebanon have been discussing a common vision for taking on the US plan.

The Lebanon-based Alliance of Palestinian Forces — comprised of Hamas, Islamic Jihad, the Palestinian Communist Party and the Popular Front for the Liberation of Palestine — recently requested a meeting with Hezbollah. According to Ataya, the process is at a preliminary stage, but is being pursued. The goal will be to agree on practical measures to resist Trump's plan and protect Lebanese and Palestinian interests. He remarked that converting Palestinian and Lebanese rejection of naturalization into practical steps will require brainstorming on the political and legal dimensions of the issue.

In a speech marking International Quds Day, Yahya al-Sinwar, Hamas' leader in Gaza, noted that Iran has supplied the Palestinian resistance with missiles and asserted, “The deal of the century aims to integrate Israel into the Arab and Islamic region. Whoever supports the [Palestinian] liberation of Jerusalem and the resistance is a friend, but anyone who [sells out] Jerusalem is an enemy.”

Among the chorus of critics opposing the peace plan, Iran's supreme leader, Ayatollah Ali Khamenei, recently called the deal an “evil plot” that will fail. During marches on International Quds Day, protesters in Gaza praised Iran while condemning the plan.